A Winning Strategy for Tom Cotton 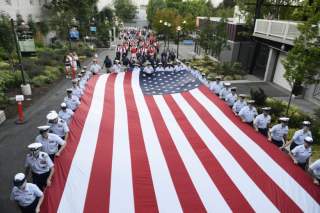 Arkansas was once close to the Republicans’ top opportunities to pick up a Senate seat this fall. According to one recent poll, 57 percent of the state’s voters disapprove of Barack Obama’s performance in office. Only 30 percent support Obamacare, while 57 percent think it’s a bad idea.

Mitt Romney won the state with just under 61 percent of the vote in 2012. Obama won less than 37 percent. The Southern state hasn’t voted for a Democratic presidential candidate since Bill Clinton, a long-time former governor, was reelected in 1996. The last Democratic senator to seek reelection in Arkansas, Blanche Lincoln in 2010, lost to her Republican challenger by more than twenty points.

Mark Pryor, the incumbent Democrat, has cast all the same votes as Lincoln that should place him in jeopardy. He remains supportive of Obamacare, saying he would vote for it all over again. Although he remains nominally pro-life in a socially conservative state, in 2011, he voted with NARAL Pro-Choice America 100 percent of the time.

Pryor has attracted a top-tier Republican challenger in first-term Congressman Tom Cotton, a Harvard Law graduate who served honorably in Afghanistan and Iraq. This fact has prompted Pryor to comment stupidly that Cotton’s military service gives him a “sense of entitlement”:

“Almost like, ‘I served my country, let me into the Senate.’ ”

Yet the same poll that shows Obama and Obamacare flagging in Arkansas also has Pryor beating Cotton by eleven points. Pryor exceeds the critical 50 percent threshold for an incumbent while Cotton hovers around 40 percent of the vote. The Republican is losing independents, at less than 60 percent support among evangelicals, and is carrying just 5 percent of Democrats. When Republican John Boozman unseated Lincoln in 2010, he may have taken 20 percent of Democrats.

This poll, conducted by NBC News and Marist College, follows a New York Times Upshot/Kaiser Family Foundation survey showing Pryor leading Cotton by ten points, so it’s no outlier. (Though in April, a Republican poll had Cotton up by one point and the Democratic firm Public Policy Polling had Pryor leading by just three.)

Despite Arkansas’ recent reddish hue at the national level, there are reasons the state is no slam dunk for Republicans. As of 2010, Democrats retained a voter registration advantage. They still do well in down-ballot races throughout the state. Democratic Gov. Mike Beebe has a 79 percent approval rating among registered voters; former President Clinton is viewed favorably by 70 percent of residents.

Pryor’s father David was a governor and U.S. senator. He remains popular in the state. The son is also winning the popularity contest part of the Senate race. NBC/Marist found that 50 percent of Arkansas registered voters view Mark Pryor favorably, 35 percent unfavorably. The numbers for Cotton are 39 percent negative, 38 percent positive.

This might have to do with the campaign each man is waging. Pryor is hitting Cotton hard on Social Security and Medicare, including his votes for Paul Ryan’s budgets. This is a transparent attempt to keep senior citizens from voting for the Republican. Cotton is emphasizing his military service. It is possible that this approach is calling attention not to the characteristics he wants to play up—duty, honor, sacrifice—but his staunchly hawkish foreign-policy views.

Billed as the “last, best hope for GOP hawks,” Cotton is an unrepentant defender of the Iraq war and George W. Bush’s first-term foreign policy more generally. “I think that George Bush largely did have it right,” he has said. “That we can’t wait for dangers to gather on the horizon, that we can’t let the world’s most dangerous people get the world’s most dangerous weapons and that we have to be willing to defend our interests and the safety of our citizens abroad even if we don’t get the approval of the United Nations.”

We are not far off from when entitlements and interest payments on the national debt will essentially crowd defense spending—the federal government’s paramount constitutional responsibility—and all other discretionary expenditures out of the federal budget. But attempting to solve that problem is very different from appearing to want to cut programs for old people to pay for more $1 trillion wars.

Cotton needs to explain that if Social Security and Medicare are not reformed, they will one day not be there in their current form for anyone. And if the reforms don’t start relatively soon, people already depending on these programs will have to feel the effects.

It can be done. Even the losing ticket of Romney and Ryan won 56 percent of voters over the age of 65. They won 51 percent of those nearing retirement, aged 45 to 64. Despite losing Florida, Romney-Ryan took 58 percent of the state’s seniors. Connie Mack, the Republican senatorial candidate who ran against Ryan’s Medicare reforms, lost these voters.

To win in Arkansas, Tom Cotton needs to stop playing defense on entitlements—and start supporting a foreign policy of defense rather than offense.

W. James Antle III is editor of the Daily Caller News Foundation and author of the new book Devouring Freedom: Can Big Government Ever Be Stopped? Follow him on Twitter: @jimantle