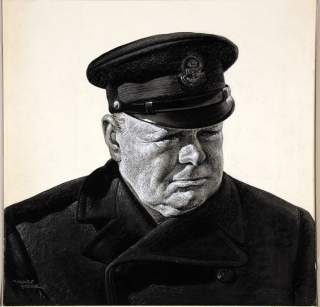 Roughly fifty years ago, the media was awash with eulogies of Sir Winston Churchill, the wartime prime minister credited with rallying the British public and defense establishment during the darkest days of World War II. Particularly in 1965, close to the height of the Cold War, it seemed appropriate to remember Churchill’s role in the great mid-century triumph of democracy over tyranny. The free world had lost one of its key figureheads; a great leader had passed.

On the half-centennial of Churchill’s death at age 90, it is only to be expected that his achievements are once more recapitulated. Yet unlike in the 1960s, it is now possible to recall the man’s many flaws and weaknesses alongside his considerable strengths. For Winston Churchill was neither a saint, nor a sage. He was, instead, a mere mortal, responsible for committing numerous acts of ill-judgment over the vast span of his career. This is true when evaluating Churchill both by modern standards and by the yardsticks of his own day and age.

Consider first some of Churchill’s views that would appear horribly reactionary and illiberal to us in the twenty-first century: his advocacy of poisonous gas being used to subdue resistance to the British Empire; his intolerance of Gandhi and other campaigners for self-rule in the colonies; his occasional words of praise for Hitler and other fascist dictators; to name but a few examples. To laud the wartime leadership of a man who in 1943 failed to coordinate a response to the starvation of millions in the famine-struck, British-controlled Bengal Province of India seems insensitive at best and willfully misguided at worst. Churchill’s heavy drinking and his infamous rudeness seem tame in comparison to such shortcomings.

It might be responded that almost all men of Churchill’s class and generation were imperialists and racists; that Churchill should be forgiven for stray comments in favor of autocrats whom, in any case, he would turn decisively against well before most of his contemporaries realized that danger was brewing on the European continent; and that a politician hardly can be held responsible for all of the horrors and privation of war. But Churchill was no stranger to criticism, even in his own time. Indeed, allegations of poor political judgment and questionable intentions plagued this obviously careerist, self-aggrandizing Anglo-American aristocratic throughout his entire public life.

As Chancellor of the Exchequer in 1925, for example, Churchill’s decision to return Britain to the gold standard was lambasted by a sizable contingent of onlookers as a disastrous mistake, a move that plunged British industry into the doldrums and resulted in mass unemployment across the country. A decade earlier, Churchill, as First Lord of the Admiralty, had been implicated in the bloodbath that was the Battle of Gallipoli, one of the worst Allied defeats of World War I. Although later exonerated over his role in the fiasco, Churchill’s name is still sullied in Australia and New Zealand as a result of blunders lain at his feet. Meanwhile, Churchill was ostracized from the Conservative Party for almost the entire 1930s because of his bloody-minded opposition to granting India the status of a Dominion within the British Empire and Commonwealth, and the future prime minister found himself far outside of the mainstream during the Abdication Crisis by refusing to forsake the disgraced (and likely Nazi-sympathizing) Edward VIII at a time when the rest of the country’s elected leadership was trying to show unity in the face of a constitutional quagmire.

It would be wrong, then, to sanctify Churchill by sanitizing his record as a man and as a politician. Churchill made more than his fair share of mistakes—some forgivable, perhaps, but others clearly beyond the pale. This does not mean that Churchill was a poor leader, or even that his miscalculations and infelicities should overshadow his historic achievements. Rather, the point is that no political leader—not even the most lionized among them—is without flaw. The temptation ought to be resisted to conflate leaders with their achievements, to attribute human progress to the endeavors of “great men” alone. Churchill was indeed a great leader, at least for a time, but it is still possible—and quite wrong—to overstate the case.