Wishful Thinking? Drone Warships Are Vital But Not a Perfect Path to a 355 Ship Navy. 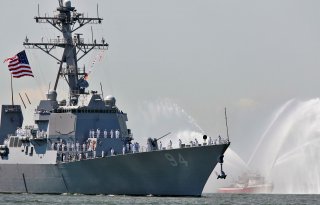 Defense Secretary Mark Esper recently visited California and where he chose to spend his time is enlightening. Stops included the USS Bonhomme Richard, which suffered a catastrophic fire in July, the USS Carl Vinson aircraft carrier, and in Santa Monica, the defense think tank Rand Corporation.

The visit no doubt boosted morale, but one of Esper’s comments left analysts wondering. “Unmanned will enable us to grow the United States Navy well beyond 355 ships…,” he said. Does this mean unmanned platforms will replace manned ships in the current building plan (or new) plan? Or, will unmanned platforms be added to the 2016 assessment for needed manned ships? Whatever the answer, it seems fair to infer that these yet-to-be-fully-validated platforms will constitute a significant share of the Navy Esper envisions.

These questions are ripe because, any day now, the Department of Defense is expected to release its Integrated Naval Force Structure Assessment (INFSA). Congress has been particularly anxious to get this report and its associated thirty-year shipbuilding plan which was originally expected last February. Lawmakers hope to use the report to inform the defense budget.

At stake are such issues as the future of the Navy’s aircraft carriers and the role of unmanned systems, and how quickly they can join the fleet as the Pentagon prepares for great power competition with China and Russia. Strategically and operationally, the Navy urgently needs more ships and to better rationalize the operational demands on individual ships and crews. However, caution is needed when deploying new and still developing unmanned systems towards a goal of 355 ships by 2034.

Absent a clear vision of the future fleet’s design, a two-pronged approach is advisable. The Navy should continue to pursue its current (2016) plan for 355 ships, recapitalizing and expanding shipyard capacities to support the growing fleet—the Navy’s $21 billion, twenty-year Shipyard Infrastructure Optimization Program (SIOP). Simultaneously, it should continue its current, modest, block purchases of unmanned systems to enable iterative development, building in options and capacity to grow in numbers rapidly once operationally validated.

Such an approach would ensure that, during this period of rising tensions with China, the fleet will get proven, manned ships on time. Yet it also allows the Navy to make a hedged bet on unmanned platforms that will be vital to keeping pace with our great power competitors in the coming decades.

Will the Navy need a larger budget to accomplish this? Yes.

Given defense priorities over the last three decades, the Navy is digging itself out of a capacity hole not wholly of its own making. The post-Cold War peace dividend was financed by cuts in defense. Assuming the Navy’s budget had kept pace with a fixed 3 percent rate of inflation from 1989 to today, it has kicked in over $1.2 trillion toward the peace dividend.

Just like during the Reagan years, the Navy will play a key role in great power competition—this time unlike the Cold War—against the industrial behemoth of China. During the 1980s naval build-up, the Navy consumed an average of 34.3 percent of a defense budget that averaged 5.8 percent of the nation’s Gross Domestic Product (GDP). Today, despite efforts to grow to 355 ships over the past few years, the Navy averages only 29 percent of a Defense budget that accounts for but 3.2 percent of GDP. These challenging times require invigorated defense investments.

Had the Navy maintained a flat budget and not been squeezed for a peace dividend, its budget today would be $49 billion larger. Can any increase come from elsewhere in the defense budget? Perhaps to a small degree, but each service now has pressing needs as it emerges from the 2001-2014 modernization “holiday” and prepares to meet the challenges posed by Russia and China.

The Navy has begun some serious work but has more to do to prove the operational validity and reliability of its future fleet concept. This is vital to justify why more money should be invested in its future fleet. Time is in short supply when ensuring such a new fleet is relevant to the sharpening great power competition unfolding today. An upcoming exercise is an opportunity to provide some clarity on this vision as well as validate some key unmanned systems and their employment.

The Navy also can draw on previous experience with unmanned systems. This includes carrier landings and launches of an earlier iteration of the MQ-25 in 2013 and three years of optionally manned K-MAX resupply missions in Afghanistan. Other lessons come from the deployment of the MQ-4C Triton to Guam in 2019 and the Sea Hunter, which completed sea trials in 2016 and sailed unmanned in 2018 on a 4,000 mile roundtrip from San Diego to Hawaii.

That said, more experience is needed, and a dedicated unmanned fleet battle problem exercise can help. Unfortunately, a provision in the House version of the FY2021 National Defense Authorization Act would prohibit integrating of offensive weapons on the LUSV until Congressional concerns that this might violate law governing armed conflict are resolved. This provision, which ignores existing internal legal reviews (e.g. U.S. Navy Judge Advocate General’s National Security Law Code 10 office), would unduly limit the usefulness of next year’s testing.

In the future, such concerns might be better addressed in early and frequent program updates to Congress. This could help push along much-needed testing, hopefully avoiding what Rep. Mac Thornberry (R-Texas), a long-time House Armed Services Committee member and one-time chairman, calls the “valley of death,” where too many promising technologies die in the Pentagon’s acquisition process.

Confronting a situation similar to the Navy’s situation today, British Adm. Jackie Fisher noted in a letter to Winston Churchill that “The luxuries of the present are the necessities of the future.” Having warships in sufficient numbers and reliability will be necessary in America’s immediate future. Unmanned is a part of the solution, with the potential for rapid growth in unmanned platform numbers that can have a dramatic strategic effect. But unmanned platforms are not a panacea; they must be part of a balanced fleet, one with both manned and unmanned ships.

Brent Sadler is the senior fellow for naval warfare and advanced technology at The Heritage Foundation’s Center for National Defense.