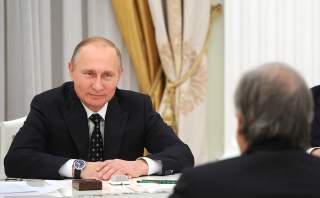 When asked in the wake of Vladimir Putin’s annexation of Crimea to share his views on Russia, President Obama said: “Russia doesn’t make anything.  Immigrants aren’t rushing to Moscow in search of opportunity. . . . The population is shrinking.”

Unfortunately, these claims (and others) about Russia reflect the narrative crafted of the Washington consensus that is based more on wishful thinking than facts. In reality: Russia does make quite a few things, including spacecraft that provide the only means of transportation for U.S astronauts to get to the International Space Station; rocket engines that launch U.S. government satellites into orbit; and air defense systems that shot down the Malaysia airliner over Ukraine. By the best measure, Russia’s GDP grew by 70 percent in 2000–15, twice as fast as the U.S. economy. Russia’s population has been steadily growing since 2009 and Russia is second only to the U.S. and Germany in terms of immigrants.

With these and other key facts about Russia in mind, the next team in the White House should base its Kremlin policy on two key factors: what steps would best serve America’s vital interests and what is Russia’s own understanding of its place in the world and its relations with the U.S. and other great powers. First and foremost, the next U.S. President must do everything possible to prevent an accidental U.S.-Russian war, now the likeliest it’s been since the end of the Cold War. Overturning President Obama’s ban on communication at every level from President-to-President to Secretaries of Defense and regional commanders; de-conflicting in Syria, multilateralization of U.S-Russian agreements on preventing military incidents; and similar confidence-building measures in the military-to-military domain—all should help reduce the risk.

America’s next leader should also continue building a credible deterrent to dissuade Russia from overt and covert aggression against U.S. allies, but should bear in mind the potential consequences of further alienating Russia—like a closer military-political alignment between Moscow and Beijing. The next team in the White House would also do well to stop talking down to Russian leaders, whose policies, whether we like it or not, reflect the Russian public’s well-grounded wish to see their country become a great power again. We need a realist approach toward Russia—one that acknowledges that another reset is impossible in the near future, but still provides for continued talks on resolving the conflicts in Ukraine and Syria and for establishing rules of the game in the cyber domain. More important, Washington should engage Moscow in areas of mutual interest where Russia’s behavior can have a significant impact on U.S. national security, such as preventing accidental war and terrorist attacks and countering proliferation of nuclear weapons.

Like it or not, Putin’s Russia is not going anywhere in the foreseeable future. Putin’s Russia is directly impacting U.S. national interests; and it will continue to do so for as far into the future as any eye can see.

Editor’s Note: Text was written on Monday, November 7, prior to election results.

Graham T. Allison is director of the Harvard Kennedy School’s Belfer Center for Science and International Affairs and a former assistant secretary of defense for policy and plans. He is the author of the forthcoming book, Destined for War: America, China, and Thucydides’s Trap.