Without Movement on Denuclearization, Moon's Meeting with Kim Will Fail 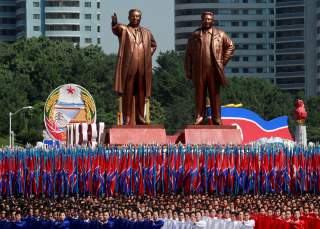 This week, South Korean president Moon Jae-in will visit North Korea’s capital, Pyongyang, for a third summit this year with North Korean leader Kim Jong-un. The stakes are high. 2018 has seen a major effort at détente with North Korea by the United States and South Korea. While the South Korean track is progressing somewhat, the American process is stagnating. For instance, President Donald Trump recently prevented his Secretary of State, Mike Pompeo, from visiting North Korea.

Within the American administration, there is much pessimism that engagement with North Korea will result in anything meaningful. Trump himself seems to enjoy all the attention and media focus. It is also clear that the North Koreans are learning what other foreign leaders have picked up—that Trump is a sucker for flattery. Kim appeals directly to Trump through his personal communication—the exchange of letters—and Trump likes to emphasize his personal relationship with Kim. But this is pretty thin; Trump has only met Kim once for a few hours with communication through translators. This is more like a business meeting than a relationship. Nine months of engagement has still not resulted in any significant movement on the issues the Americans care about—nuclear weapons and missiles.

Indeed, Washington still does not even have a list of North Korean weapons and facilities yet. Americans have gotten some low hanging fruit from Pyongyang. Humanitarian gestures such as the return of American soldiers’ remains from the Korean war and the release of U.S. hostages in the North are helpful but not strategic progress. That is, they do not change the military or political situation on the peninsula in any measurable way. If détente is going to stick—if it is going to survive the next change of administrations in Seoul and Washington—North Korea will need to make more serious changes. To be sure, America and South Korea will have to make concessions too—such as on sanctions and aid. But given how often North Korea has ‘negotiated' in the past while giving up nothing substantial, there will be massive skepticism in Washington and Seoul. That skepticism will remain until the North Koreans move on nuclear weapons, missiles, artillery deployments near Seoul, human rights, gulags, and so on.

This is the core of Moon’s challenge on his Pyongyang trip this week—can he get a real concession out of the North? America and South Korea are almost ten months into this year of détente, and they have precious little to show for it. On the inter-Korean side, there has been much exchange—the Olympics, joint artistic events, and family reunions—but these do not change the peninsular balance. Moon is a liberal and a dove on North Korea; he has more tolerance for North Korean foot-dragging. But hawks in Seoul and Washington are waiting for serious shifts in the North before assenting to this détente, and without some buy-in from the right, Moon’s détente will not survive the next partisan transition (back to the conservatives) of the South Korean presidency.

So here are two points to watch for when Moon meets Kim:

1. Do the North Koreans Change the Subject?

Much of the skepticism of dealing with North Korea comes from decades of previous experience which resulted in little. North Korea will almost certainly seek to discuss everything except its nuclear weapons and missiles. It will emphasize Korean nationalism (against the American interloper), common Korean culture, the importance of shared projects, joint sporting events, and so on.

This will pose a challenge to Moon. If he values the U.S. alliance, Moon must be sure to push the issues the Americans worry about—nuclear weapons and missiles. He must get some commitment and ideally movement on these issues. Moon himself may not actually care for the U.S. alliance that much. The South Korean left has long been skeptical of it. But the American alliance is extraordinarily popular in South Korea. Moon’s approval rating is already below 50 percent. If the perception of his trip is that he is sacrificing the American alliance for a better relationship with North Korea, that rating will likely drop further.

Moon's détente with the North has progressed in part by dodging the thorny issues the Americans want raised—nukes and missiles. The broad idea is that if North Korea can be brought into the international community, it will slowly soften and normalize—in which case the broader improvement in relations obviates America’s narrow focus on North Korea.

Critically, this is what happened after the last leftist South Korean government reached out to North Korea economically in the early 2000s. The North simply pocketed the gains and moved on. Moon must either prove that this time really is different or forestall economic engagement until after the North has moved on political and military issues.

In short, Moon is in a tight spot. His leftist coalition wants full-throated engagement, is suspicious of U.S. intentions in the region, and increasingly thinks nuclear missiles are an issue solely for the Americans and North to work out. But Moon’s approval rating is slipping, and the American alliance is hugely popular in the South. Even if Moon wants to ‘de-couple’ from Washington and go his own way with the North, he politically cannot. He needs some buy-in from the South Korean right on détente, or he will be hammered in the media and public opinion as surrendering the U.S. relationship for the tyrants of Pyongyang. Hence the best outcome is that Moon returns from the North with—finally!—a real concession that will allay American fears and concerns on South Korea’s restive right and queasy center that two-way détente is not one-way appeasement and breach with Washington.