Women Helped Build Ukraine, And Now Women Can Help Save It 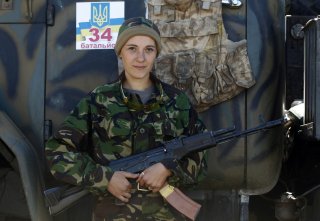 The brave Ukrainian people have given a lesson to the entire world about what it means to fight for freedom, democracy, and independence. Russia’s unprovoked and unjustified war against Ukraine has endangered millions of innocent people, undermined the foundations of the international order, and is fundamentally reshaping European security and politics. This is happening mainly because of the incredible resistance of the Ukrainian military, leadership, and people.

Putin’s obsession with Ukraine during his tenure is related to his historical narrative of rebuilding the Russian empire. Besides the economic importance of Ukraine’s strategic position and its national resources, above all, Putin’s obsession is related to Ukraine’s choice for democracy and closer ties with the European Union and the West. This constitutes the biggest threat to Putin’s regime.

The Kremlin has been using its “façade” democracy for the last two decades to create the fake aura of being a modern power. What terrified the Russian leadership most was the global wave of color revolutions in the early 2000s. The 2003 Rose Revolution in Georgia, the 2004-05 Orange Revolution in Ukraine, the unexpected and significantly large December 2011 protests over rigged elections in Russia, the Arab Spring Revolution of 2011-2012, and, above all, the successful 2013 Euromaidan Revolution of Dignity in Ukraine. There is little doubt that the Euromaidan Revolution is what motived Putin’s illegal annexation of Crimea and the bloody proxy war in eastern Ukraine. He was hoping that by playing an ethno-nationalistic card he could stop his hemorrhaging popular support in Russia. The unintended consequences of Putin’s aggressive behavior have backfired: promoting a strong Ukrainian national identity and a genuine shift in European and transatlantic unity.

Since 2014, I have been honored to travel to Ukraine frequently and work with impressive dynamic reformers, whom I always admire for their positive energy, love of country, and infectious passion for freedom and democracy. As my heart bleeds watching the news on the war in Ukraine, I want to pay tribute to my friends that are fighting for the freedom of their country and our Europe, especially the courageous Ukrainian women.

Women across Ukraine, from politicians and diplomats to civil society experts, beauty queens, housewives, and artists, have taken up arms to defend their country. They have captured the microphones to raise international awareness and to defend their democratic way of life. Ukrainian women gained a strong voice in the last decade of conflict, and this is the voice that the world is hearing today as they protect their families and their country in the fight for freedom and democracy.

The Revolution of Dignity brought together hundreds of thousands of Ukrainians expressing a strong desire to be part of democratic Europe in protest against former President Viktor Yanukovych’s decision not to sign the Association Agreement with the European Union. Their anger was amplified by their frustration with widespread corruption that had made Ukraine the poorest country in Europe and robbed its citizens of their dignity. At the core of the revolution were women, who made up 50 percent of the participants. Filling the streets of Kyiv, they were both on the front-line of demonstrations and sustaining the protesters by performing critical tasks such as delivering food and medical supplies, raising funds, patrolling the barricades, and providing legal services.

As Ukraine went through dramatic changes and democratic reforms, forty-seven women were elected to Ukraine’s parliament, the Verkhovna Rada, in November 2014. While it was historically a political milestone for Ukraine, women made up only 11 percent of the parliament. But they were all real fighters and some of them were the most courageous women I have ever met. They were driven by a vision for a transparent, accountable, and more prosperous Ukraine. Their commitment to doing the right things was key to a number of positive defense reforms in the country. The number of women in parliament grew considerably after the 2019 elections to 20 percent, demonstrating their larger political role in Ukrainian affairs. Women have also been central to countering Russian aggression since 2014. They now make up 20 percent of the Ukrainian Armed Forces and under a new law, they are ensured equal rights with men to serve in combat positions and earn promotions. Many women also serve in law enforcement and other security agencies, demonstrating great commitment and expertise. With the Zelensky administration, there has been a qualitative increase in the number of women in high-level ministerial positions. Gender equality has been an aspirational goal since the Revolution of Dignity, although much more needs to be done to empower women economically, socially, and politically.

The bloody conflict in eastern Ukraine with more than 2 million internally displaced people (IDPs) has disproportionately impacted women, but they have not lost the will to fight. I can only imagine the consequences of the impact along the total front of the war that we are currently witnessing.

In the last decade, there has been a growing appreciation for the role of women in democratization processes. The politicization of motherhood that “turns needs related to children into political demands and thus promotes political action,” is a new argument in the democratization literature.

This is what we are seeing in Ukraine. Tremendous changes are being driven by courageous women who are contributing as equals for the future of the country. New legislation passed by the Rada in January 2022 allows for women to be registered and serve in the Territorial Defense Forces. Although much debated publicly, this is a positive development that will change the mentality and shift the traditional gender norms by recognizing and appreciating that women are central to the national cause. Several parliamentarians that were promoting legislation for the Territorial Defense Forces are now serving on the front line themselves.

Ukrainian civil society has been one of the key drivers for democratic developments in Ukraine. Just a few days ago, Ukrainian civil society leaders signed the Kyiv Declaration asking for international support as they were being bombed by Russian missiles. Choosing freedom and democracy over authoritarianism, It is worth pointing out that almost 50 percent of the ninety-four signatories are women.

This crisis is beyond imagination and catastrophic in consequences. But what is inescapable is the invaluable role that women have played in driving and supporting the Ukrainian response by taking up arms, microphones, supporting the war effort, providing for their families, and taking responsibility for their children as they seek refuge in neighboring countries. Their participation and leadership have been inspiring.

Going forward, international institutions such as the United Nations, NATO, and the Organization for Security and Cooperation in Europe should pay much stronger attention to this tragic humanitarian crisis with a special lens on how it is affecting women. Making their voices heard is a strategic imperative. Women leaders in government and civil society need to be central to this conflict’s resolution and the post-conflict reconstruction of a democratic Ukraine.

Dr. Valbona Zeneli is a Professor of National Security Studies and the Chair of the Strategic Initiatives Department at the George C. Marshall European Center for Security Studies. She is also a visiting Europe’s Futures Fellow at the Institute for Human Sciences (IWM) Vienna. The views expressed are her own and do not necessarily reflect the positions of the U.S. Government, the U.S. Department of Defense, or any of its components.