The World Must Not Forget South Sudan 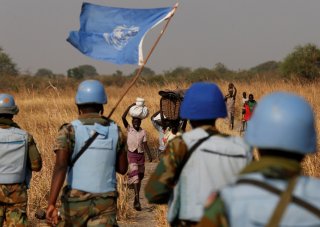 Amid the surge of global crises, from Afghanistan to Ethiopia and now Ukraine, the chance to stem what may be the next great crisis is being lost. Tensions in South Sudan are rising ahead of the end of the country’s transitional peace period and planned elections in 2023, risking a return to the kind of widespread atrocities that killed more than 380,000 people during the country’s civil war a few years ago. Violence, displacement, and hunger are all likely to increase in the year ahead.

It is therefore noteworthy that a robust mandate for the United Nations peacekeeping mission in South Sudan (UNMISS) has just been renewed. But the mission will need support from the United States and other countries if it is to successfully balance increased demands to support lagging implementation of the country’s 2018 peace agreement ahead of elections with the more immediate need to protect civilians. The world must also not ignore the growing humanitarian crisis in South Sudan, where one-third of the population remains displaced and two-thirds are in need of humanitarian assistance.

Three things are needed if South Sudan is to keep moving toward peace.

First, UNMISS must continue to protect South Sudan’s civilians even as it faces limited resources and increasing demands to support such vital, delayed aspects of peace implementation as drafting a new constitution, preparing for elections, and forming a unified army. UNMISS is tasked with the protection of civilians, furthering peace, creating safe conditions for humanitarian aid, and monitoring and reporting on violations of human rights and humanitarian law. Protecting the South Sudanese is bound to get harder, however, as political jockeying raises tensions in the lead-up to next year’s elections. The reality is that the country’s political elites have continued to stoke violence in pockets of the country. UNMISS has had some success in quelling the violence by setting up 125 temporary operating bases in potential hot spots.

But this approach must be balanced with the need to keep watch and respond to dangers in UN bases known as Protection of Civilian sites, to which tens of thousands of people fled for refuge during the civil war. Over the past year, UN peacekeepers have handed over all but one of these five sites to South Sudanese authorities. But often this means that those sites are now overseen by the same authorities who led the attacks that caused people to flee to those sites in the first place. The fact is that these sites will remain centers of vulnerability in need of monitoring. And peacekeepers will need to respond rapidly if violence should break out. Meanwhile, the UN mission should wait to transfer the fifth site, in Malakal, until conditions safely permit. That is unlikely to happen anytime soon.

Second, international donors must step up humanitarian aid to meet the rising needs. South Sudan is already facing the highest levels of food insecurity since its independence in 2011. Some 8.9 million people, out of 12.4 million, need humanitarian aid; half are children. The continuing violence, the large-scale displacement of the population, and a strained economy are driving the crisis. The Covid-19 pandemic, recent flooding and drought, and bureaucratic and security constraints on aid access have made matters worse. So, too, has the history of South Sudanese authorities misappropriating humanitarian aid, which is likely to increase as the elections approach. But this isn’t a reason to reduce aid to people in need. Instead, it’s a call for further due diligence and political attention to keep track of how it’s spent.

This leads to the third important step: more diplomatic attention from the United States and its key partners, including notably Norway, the United Kingdom, and South Sudan’s African neighbors. As the leading donor of humanitarian aid to South Sudan, the United States should urge other countries to donate more and step up its own diplomacy to bring peace closer. Washington can start by putting its diplomats in place. After more than a year and a half without a U.S. ambassador, the Biden administration has now announced a nomination, which Congress should vet and approve quickly. Even so, the State Department’s post of special envoy to Sudan and South Sudan has remained vacant since last August. The Biden administration should fill the job or, at a minimum, name a high-profile official to focus on South Sudan within the office of the special envoy for the Horn of Africa.

South Sudan has suffered from war through most of its first decade as a sovereign nation. The renewed UNMISS mandate ahead of a critical year for peace implementation must be utilized to turn things around in the decade ahead. Let us not forget South Sudan.