Worried About the Stock Market? This Is Just the Beginning. 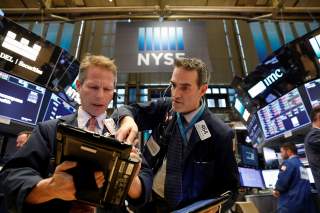 Watching the financial markets gyrate over the past week, it is tempting to wonder if the global economy will ever return to an era when the decisions of private investors are more important than the policies of governments. Since 2008 and even before, central banks have been buying public and private debt and even private stocks, all in an attempt to “boost growth.” But now the proverbial party is over.

For years now, most investors could buy a stock or bond and have a high degree of confidence that the position would generate a profit—or at least avoid a loss. The market volatility of the past week signals that the free ride is over. As this writer told the audience on CNBC this week, global markets are engaged in price discovery in a world where central banks now own a third of all securities, including debt and stocks.

“We are coming from a period in which there was virtually no financial market volatility whatsoever,” notes Allianz chief economic adviser Mohamed A. El-Erian. “Last year alone we saw six of the seven lowest measures for volatility in history. . . . Equity markets went a very long way up very quickly and you tend to get technical corrections, you tend to get air pockets.”

Air pockets indeed. One of the more alarming indicators of the troubles facing the global economy in the journey back to “normal” is the huge accumulation of debt by the major industrialized nations. If you add up all the money that national governments have borrowed, it tallies to a hefty $63 trillion, according to a post last year by Visual Capitalist. The question raised by this report is whether global central banks can really ever end debt purchases without facing default by some of the more heavily indebted nations such as Italy and Japan.

“The U.S. is a prime example of ‘debt creep’—the country hasn’t posted an annual budget surplus since 2001, when the federal debt was only $6.9 trillion (54 percent of GDP),” notes the Digital Capitalist. “Fast forward to today, and the debt has ballooned to roughly $20 trillion (107 percent of GDP), which is equal to 31.8 percent of the world’s sovereign debt nominally.

Doug Bandow stated the situation nicely in the American Conservative:

The United States is effectively bankrupt, but that doesn’t matter to the GOP. Once evangelists of fiscal responsibility and scourges of deficit spending, Republicans today glory in spilling red ink. The national debt is now $20.6 trillion, greater than the annual GDP of about $19.5 trillion. Alas, with Republicans at the helm, deficits are set to continue racing upwards, apparently without end.

Rising deficits and interest rates signal a return of volatility. As the Federal Open Market Committee (FOMC) ends its purchases of securities and allows its portfolio to slowly run off, the financial markets will see the end of the period of little or no volatility in terms of prices for stocks and bonds. Many investors took severe losses on February 5, when the Dow Jones Industrial Average ended down more that 1,200 points.

While the move in the DJIA was severe, the bigger problem was the surge in the various derivatives such as the CBOE Volatility Index, known by its ticker symbol “VIX,” a popular measure of the stock market’s expectation of volatility implied by S&P 500 index options. Many traders who had taken “short” volatility positions anticipating that the artificially calm markets created by the FOMC would last indefinitely were subject to rude shock when the VIX trebled in price in a matter of hours.

Billionaire investor Carl Icahn told CNBC this week there are too many exotic, leveraged products for investors to trade, and one day these securities are going to blow up the market. The market is a “casino on steroids” with all these exchange-traded funds and exchange-traded notes, he said.

These funds, especially the leveraged ones, are the “fault lines” that will eventually lead to an earthquake on Wall Street, Icahn said. “These are just the beginnings of a rumbling.”

Volatility is commonly viewed as a statistical measure of the dispersion of returns for a given security or market index. Volatility can either be measured by using the standard deviation or variance between returns from that same security or a market index such as the S&P 500. But like measuring “liquidity,” trying to quantify forward price movements of a security based upon past data is a fool’s errand. Students of Dow theory know that the past tells you nothing about the future, as proven this past Monday.

The Fed has suppressed interest rates and credit spreads through purchases of Treasury debt and MBS, but it has also dampened market volatility. In fact, thanks to the Fed’s manipulation of the credit markets, we are all short volatility whether we know it or not. Unlike measures of actual market price movements, the VIX is a popularity contest; the measure of expected future volatility in the S&P 500’s rate of return.

By holding down bond yields and, indirectly, compressing credit spreads, the Fed and other central banks have reduced actual volatility and, more important, also gradually reduced the market’s expectations for future movements in the prices of securities. Thus, on Monday investors got a very big shock indeed when market prices started to fall after years of a sustained and very artificial bull market.

Not only has former Federal Reserve Board Chair Janet Yellen and her colleagues on the FOMC created a time bomb of volatility in the U.S. bond and equity markets when it comes to risk, but the extended period of low-interest rates has also created a hidden wave of future loan and bond defaults.

By suppressing credit spreads and thus the cost of credit, the FOMC afforded interior corporate and individual borrowers access to credit at premium, investment grade prices. Now corporate and consumer debt defaults are starting to accelerate. “For the first time since January 2017, the default rate for autos, bank cards and mortgages all rose together,” says David Blitzer, managing director and chairman of the index committee at S&P Dow Jones Indices.

Over the next year and more, the U.S. financial markets will become increasingly volatile as interest rates rise and credit spreads also return to something approximating normal. Borrowers who could access credit at ultra-low rates will find themselves constrained, both by the cost of credit and the willingness of investors to take risk. And retail investors who have purchased the plethora of derivative such as exchange traded funds will face a very dangerous market environment.

Investors, after all, dislike change and love risk-free returns. As the FOMC attempts to normalize policy after almost eight years of extraordinary market support, the equity markets are likely to retreat—especially with the Treasury ramping up its borrowing schedule. Each incremental increase in interest rates gives investors a greater incentive to take their profits off the table in stocks and move back to the relative safety of Treasury securities. For new Federal Reserve Chairman Jerome Powell, 2018 is likely to be a very challenging year indeed.