Would Air Strikes in Iraq Be Legal? 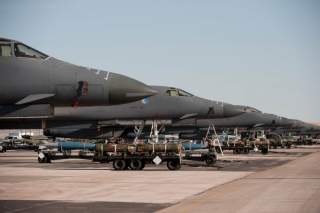 Following the stunning advances made in Iraq in the past week by the Islamic State of Iraq and al-Sham (ISIS), the U.S. government has said that it is considering conducting air strikes against ISIS in order to help “break the momentum” of the group. Over the past several days, the excellent group blog Lawfare has served as a symposium on the question of what the legal justification for such strikes would be. See, for example, Jack Goldsmith’s two posts, as well as those by Wells Bennett and Bobby Chesney. Daniel DePetris also addressed the issue here at The National Interest.

The situation is particularly complicated because there are three separate justifications that the Obama administration might rely upon, all of which have some level of plausibility but none of which are obviously ironclad. They are: the 2001 Authorization for Use of Military Force (AUMF) passed in response to the 9/11 terrorist attacks; the 2002 AUMF that authorized the Iraq War; and the president’s inherent Article II powers as commander in chief.

Of these, the 2001 AUMF seems to be the weakest argument. Under the 2001 AUMF, the U.S. government considers itself to be at war with Al Qaeda and its “associated forces.” But Al Qaeda’s leadership formally severed its ties with ISIS earlier this year, saying in a statement that ISIS “is not a branch of the al-Qaeda group” and “does not have an organizational relationship with it.” With that in mind, it’s hard to see how ISIS could reasonably qualify as a cobelligerent of Al Qaeda at this stage in time and thus be covered under the 2001 AUMF.

The 2002 Iraq AUMF, conversely, appears to represent a stronger justification. There is no temporal limitation on the authorization, and it was never repealed even after the United States completed its withdrawal of military forces at the end of 2011. The text of the authorization allows the president to act to “defend the national security of the United States against the continuing threat posed by Iraq.” With this mandate, Washington waged a war for over eight years, first to topple Saddam Hussein and then to support the newly formed Iraqi government in its battle against insurgents. In attacking ISIS, America would be doing something akin to what it was doing in the latter stages of its original involvement in Iraq: using military force to support the Iraqi central state against its enemies.

Yet relying on the Iraq AUMF raises some thorny political questions for the White House, if not legal ones. The Obama administration has for some time supported the repeal of the Iraq AUMF. The National Security Council’s press office confirmed to me on Twitter (and to Adam Serwer at MSNBC) on Friday that it continues to hold this position even after ISIS’s recent gains. The fact that the administration has made its continued support for repealing the Iraq AUMF explicit suggests that it is not about to use this legislation as the basis for a new offensive. If it did so, it would be using military force on the basis of legal powers that it officially believes it should no longer have. This wouldn’t necessarily be illegal, but it would be a pretty brazen act of hypocrisy.

That leaves the third possibility: the president’s Article II powers. This might involve a claim to be protecting American citizens or property in Iraq, or to be fulfilling the terms of the strategic framework agreement between the U.S. and Iraqi governments. The administration would probably claim, as it did during the 2011 Libya intervention, that congressional authorization was not necessary due to the “limited nature, scope and duration of the anticipated actions.” Chesney believes that this is the most likely course of action, writing, “If airstrikes occur, I’m pretty sure the argument will be Article II and only Article II.” Goldsmith, in contrast, believes that there is a “weak basis for relying on Article II alone” and that basing the use of force on Article II would further stretch the president’s war powers, which are already quite substantial.

All of this ought to serve as a reminder of two things. The first is the danger that can result from drift in policy making. Critics of the post-9/11 AUMF have frequently alleged that the legislation has served to justify a “war on terror” that is far more expansive than anyone who voted for it in 2001 could have envisioned. Now, we’re seeing the potential consequences of a different kind of drift in the case of the 2002 Iraq AUMF. Senator Rand Paul made a push to repeal the Iraq AUMF as U.S. forces were being withdrawn in late 2011, but his effort was decisively rejected in the Senate, by a vote of 67-30. He renewed this push earlier this year, with the support of several Democratic senators and the White House, yet the law still remains on the books. Now we are in a situation where the law could potentially be used to authorize force in Iraq again, years after President Obama declared the war over and in circumstances far different from those surrounding the initial invasion. Blogger Marcy Wheeler was one of the few who presciently warned in 2011 of the danger of leaving “all these AUMFs lying around on the books . . . rather than simply and cleanly declaring a war over.” If the president does use the 2002 AUMF as part of the legal basis for conducting strikes in Iraq, no one in Congress who voted against its repeal will have any grounds to complain about it.

Second, this episode is further confirmation that the most important constraints on a president’s ability to wage war are political rather than legal. Recall that during the debate last year over whether to strike Syria, Obama explicitly stated, “I believe I have the authority to carry out this military action without specific congressional authorization,” presumably under his Article II powers. However, he went to Congress, he said, because America is “the world's oldest constitutional democracy” and “the country will be stronger if we take this course.” If Obama bypasses Congress now, he will no doubt be asked to explain why it was good for American democracy to seek congressional approval in Syria but not in Iraq. This, however, is a political barrier rather than a legal one.

An unnamed Senate Armed Services Committee aide gave a quote to Serwer that perfectly illustrates this dynamic. The aide said:

In terms of the debate that we’re likely to be in in the next couple of days, what exactly is authorized and what is not authorized is secondary to what the right thing to do is from a policy standpoint. Acting to protect American interests, if an action would serve our national security, that’s going to be what’s important rather than the fine points of legality here.

This, in a nutshell, is how executive war powers work. If Congress and the public are in general agreement that military action is “the right thing to do” and “would serve our national security,” they are much less likely to be troubled by the “fine points of legality.” In Syria, it was precisely because there was no such consensus that using force was the right thing to do—with the proposed intervention voted down in Great Britain and overwhelmingly unpopular with the U.S. public—that Obama felt he needed to try to obtain congressional buy-in. In Iraq, ISIS’s recent gains have come so quickly that there hasn’t been much time for public attitudes to become clear, and some GOP members of both houses of Congress are already calling for immediate military action. All of this serves to suggest that, while we still don’t know whether Obama will in fact choose to carry out air strikes against ISIS, it’s a safe bet that the law won’t be what stops him from doing so.