Would North Korea Agree to an Iran-Style Nuclear Deal? 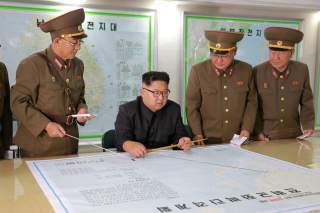 With the standoff between the United States and North Korea over the latter’s nuclear weapons program creeping closer and closer to an actual confrontation, the international community could very much use a calm, measured and pragmatic world leader in the middle of the situation. German chancellor Angela Merkel, a stateswoman who has exemplified that kind of pragmatism and restraint on a daily basis over the past twelve years, could be the person to serve that role.

Speaking to a German newspaper this past weekend about the North Korean nuclear crisis, Merkel speculated openly that an Iran-style agreement may be the widest exit ramp that the international community can use to avert a massive and deadly wreck further down the road. “I could imagine such a format being used to end the North Korean conflict,” Merkel told the paper, before adding that “Europe and especially Germany should be prepared to play a very active part in that.”

It’s an interesting and noble proposition, and one that has been debated openly in the past. Ali Wyne previously offered a convincing case as to why an Iran-deal scenario would be highly unlikely in the context of North Korea. He correctly expressed that “it is difficult to imagine a set of conditions under which the [Kim Jong-un] regime would scale back, let alone eliminate, that program, which it frames as its only defense against U.S. military action.” Indeed, the North Korean government is not shy in reminding countries around the world—the United States in particular—that its nuclear weapons program is not an asset to be negotiated in return for economic aid, diplomatic recognition from Washington, or the signing of a peace treaty formally terminating the Korean War. When North Korean foreign minister Ri Yong Ho told delegations at an Asian security meeting last month, “We will, under no circumstances, put the nukes and ballistic rockets” on the table, he merely reaffirmed what many North Korea and nonproliferation scholars have known for quite a long time—to Pyongyang, the nuclear and missile cards are not only the crown jewels of the Kim regime, but likely the only thing protecting it from a U.S. invasion. Washington may not buy into that narrative and swat away any D-Day invasion talk as nonsense from a hyper-paranoid country, but the North Koreans sincerely believe this is an option the United States has planned for.

Merkel’s idea of a JCPOA equivalent to North Korea, however, deserves some thought in policymaking circles from Washington and London to Beijing and Seoul. To critics of the Iran agreement who are still trying to persuade the Trump administration to decertify Iranian compliance, a North Korea JCPOA would be a punch to the gut. But if a reasonable, albeit imperfect, diplomatic accord is something that could de-escalate the situation and prevent us from moving towards a military conflict that most consider a doomsday scenario, then it would be an act of extreme short sightedness if world leaders didn't at least think about it.

Unfortunately, notwithstanding the UN Security Council’s official position that Pyongyang “shall abandon all nuclear weapons and existing nuclear programs in a complete, verifiable and irreversible manner,” any diplomatic deal on North Korea’s nukes and missiles would be far, far below that threshold. Pressuring Kim Jong-un to put his signature on a denuclearization pact is an illusion; like the Yeti and Big Foot, it’s a search for a mythical creature that doesn’t exist.

So assuming that the Trump administration would go into a negotiation with reasonable expectations in mind and that Kim would authorize his diplomats to participate, a North Korea JCPOA could include the following items:

- U.S. preconditions for beginning a comprehensive negotiation should be dropped. As Robert Einhorn, a former nonproliferation director of President Barack Obama’s National Security Council observed in a recent report, “The North Koreans will not take steps toward denuclearization as a condition for starting negotiations; nor will they agree, in advance, on the goal of the negotiations.” Yet this is exactly the course the Obama and Trump administrations have long traveled on: demanding Pyongyang not only declare on the front-end that its nukes will be surrendered at the end of the process, but also demanding that the regime take steps to demonstrate its sincerity before formal talks can start. The result of these preconditions has been an elevation of the dispute to a more dangerous level.

- North Korea should immediately suspend its nuclear activity, including plutonium production and reprocessing; uranium enrichment; research and development across the entire nuclear supply chain, including on centrifuge production; a suspension of intercontinental and intermediate-range ballistic missile tests; and a granting of regular and snap inspections from the International Atomic Energy Agency across all of Pyongyang’s nuclear facilities. Due to North Korea’s history of broken promises and overt nuclear development, the IAEA would be allowed to request access to any site (declared or undeclared) if it has information that nuclear-related activities may be taking place.

- In exchange, the United States and its Asian and European allies could offer a suspension of additional unilateral and Security Council sanctions for as long as Pyongyang abides by the testing moratorium; a written commitment from the United States that talks on a peace treaty will commence at a later date; and a written reassurance from the Trump administration that U.S. policy does not include regime change. A gradual suspension of some Security Council sanctions on designated entities could be an inducement if Pyongyang refuses to accept a broad IAEA mandate, but in no way should Washington provide such concessions upfront.

- An understanding between the parties that nuclear negotiations will not be unlimited. A soft deadline should be established in order to ensure that North Korea doesn’t unnecessarily drag out the process or play for time. If negotiators believe that progress is being made, the deadline could be extended for additional designated periods on mutual consent. This arrangement proved to be critical during the P5+1 diplomacy with Iran, where highly technical aspects of Tehran’s nuclear program needed more time to be hammered out among the experts.

- Once interim arrangements are made and a period of time has passed that provides all parties with evidence that implementation is being carried out faithfully, talks on a long-term denuclearization-for-peace package could begin. Everybody who has studied North Korea over the last twenty-five years knows what a comprehensive accord with the North Koreans would look like—in sum, Kim would hand over his nukes, shut down all of his facilities, and bring his missile inventory within limits. The United States would remove nuclear-related unilateral secondary sanctions, remove the North Korean nuclear issue from the Security Council’s agenda, sign a peace treaty ending the Korean War, and normalize relations with the regime. This phase of the diplomacy will be the most difficult, and United States should hope for the best but prepare for the worst. The regime has been firm that denuclearization is no longer a concession they are able to offer.

Above all, a North Korea JCPOA would look a lot like the original JCPOA with the Iranians; a good-enough agreement involving economic and political incentives from the United States to which many lawmakers (and much of the think-tank community) would be implacably opposed. A prospective deal with Kim Jong-un would require a huge chunk of political capital from President Trump himself, and it would surely further divide the Republican Party between hawks resistant to a deal and Trump loyalists who want to support their president.

But if the choice is between an OK agreement that buys time and an armed conflict with hundreds of thousands or even millions of casualties, it’s really no choice at all.