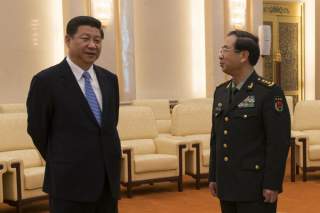 As the world turned its eyes to the mass protests in Hong Kong, it focused primarily on how the territory will elect its chief executive. The people who have taken to the streets of Hong Kong’s central business and government districts are ostensibly protesting Beijing’s decision to dictate the slate of candidates for which the citizenry of Hong Kong may cast their vote.

But such a framework is far too narrow. It implies that, if only some solution could be found to the issue of selecting a slate of candidates, all would be easily resolved. In reality, the situation is more complex for Hong Kong than just the matter of selecting a chief executive (although this is, in fact, a major issue). It is also complex for China, presenting Xi Jinping with his first real crisis since taking office.

When Hong Kong reverted from British control to Chinese in 1997, the territory was clearly economically superior to its larger neighbor. As of 1996, Hong Kong was:

Since then, Hong Kong’s preeminence has receded, in no small part because of the relative gains made by the People’s Republic of China (PRC). Whereas in 1997, Hong Kong’s GDP was 18 percent that of China’s (despite a population that was only 0.5 percent of the mainland’s), today the territory’s economic output is only 3 percent of China’s GDP. While Hong Kong’s GDP per capita remains substantially higher than China’s ($38,000 to $6,800), the gap has been narrowing there as well.

As important, the gap between the two societies has also shrunk. As China’s middle class has grown, the demand for higher end goods and services has also increased. This, in turn, has led more and more mainland Chinese to see Hong Kong as a shopping and services destination—at times to the detriment of the local population.

For the last several years, for example, a growing number of mainland Chinese have visited Hong Kong essentially as medical tourists. Wealthier Chinese women go to Hong Kong hospitals to give birth. Their children, being born in the Hong Kong Special Administrative Region (HKSAR), receive a HKSAR passport, which entitles them to live and work there. (The children may also not be counted against the one-child limit.) These amounted to some 44,000 births in 2013, accounting for perhaps half of all births in Hong Kong hospitals. This, in turn, has imposed significant stress on maternity wards and hospital facilities.

A similar phenomena has resulted from “locust” tourists—groups of mainlanders who come to the territory mainly on shopping sprees. These tourists are believed to comprise the bulk of the 40 million tourists from China who came in 2013—nearly eight times the population of the territory itself (7.18 million). While some of these “locusts” have focused on purchasing high-end luxury goods (which are substantially cheaper in tax-free Hong Kong), many more have been mainly buying staples, especially baby formula. Due to fears about consumer product safety in the mainland, many mainland mothers prefer Hong Kong-sourced milk powder and formula over those available in China, even if it is the same brand. Consequently, supplies in the territory (especially near the border) are often short and sold at inflated prices. The massive influx of “locust” tourists also affects the locals’ access to mass transit, taxis, restaurants and so on, to the point that even the Beijing authorities have recognized that this is a problem.

These tensions reflect a broader unease that has been growing within the Hong Kong populace, as Beijing seeks to remake the territory more like the mainland. Such concerns date back to the hand-over and before, as local Hong Kong citizens rushed to learn Mandarin (the language of Beijing) to supplement the local Cantonese dialect.

While Beijing initially sought to minimize its impact, its measures now have become more intrusive. In 2012, Chinese efforts to inject more “patriotic education” into the Hong Kong school curricula precipitated large-scale protests, as students and teachers resisted what they termed “brainwashing.” In the end, the Hong Kong and Beijing authorities rescinded that decision, allowing Hong Kong’s school system to set its own curriculum. But Beijing has clearly become more intent on bringing the territory to heel.

This has come to a head with the debate over universal suffrage in Hong Kong. The Chinese central authorities and Hong Kong officials agreed that the eligible population of Hong Kong would be able to exercise universal suffrage in the 2017 elections. However, Beijing made clear that it would have a firm say over the slate of possible candidates. The electorate could not be allowed to vote into office a chief executive who might openly challenge Chinese control of the HKSAR. Beijing would, in short, retain the right to determine for whom the electorate would be able to cast votes.

The June 2014 Chinese white paper on Hong Kong made this point explicit. After repeated references to the “one country, two systems” approach and the importance of local autonomy, the paper states:

The paper then clarifies that the “two systems” aspect pertains to the running of the territory’s economy:

To reinforce the point, the paper reiterates:

For Hong Kong to retain its capitalist system and enjoy a high degree of autonomy with "Hong Kong people governing Hong Kong" according to the Basic Law, it must fully respect the socialist system practiced on the mainland in keeping with the "one country" principle and, in particular, the political system and other systems and principles in practice.

Not surprisingly, the publication of the paper aroused a strong reaction from Hong Kong citizens, as it essentially redefined the terms of the Basic Law and the Joint Anglo-Chinese statement that was supposed to chart the territory’s path for the half century after reversion. Passions were further inflamed when the Standing Committee of the National People’s Congress passed a resolution that again made clear that Beijing would control the slate of possible candidates for which Hong Kong citizens could vote. The result has been the recent major demonstrations in the city’s downtown districts.

For Xi Jinping, the onset of major demonstrations in China’s premier financial center constitutes a major potential challenge to his rule. Unlike previous confrontations since Xi took power in November 2012, this is not a situation that he can control outright. By contrast, the November 2013 East China Sea Air Defense Identification Zone (ADIZ) issue, and the confrontation with Vietnam over the Chinese HY 981 deep-sea oil rig earlier this year, as well as the recent P-8 and USS Cowpens incidents involving the U.S. Navy have all been much more subject to Chinese timing. China can deploy more or fewer forces around the Senkakus, intercept more or fewer aircraft transiting the ADIZ, and assume a more or less aggressive stance in the South China Sea. But the students demonstrating in Hong Kong may or may not respond as Beijing expects. Thus, they pose a greater challenge to Beijing than any other recent crisis.

Xi now faces the first real test of his crisis-management skills. How he handles the students and other protesters—whether he cracks down promptly, allows events to run their course or relies upon local authorities, perhaps even devolving some authority to them—will provide insights to his broader approach to crises. For this reason, Xi’s domestic rivals will be watching developments in Hong Kong carefully to assess his potential vulnerabilities, as well as to exploit potential openings that might emerge.

In the past, this might not have mattered as much, as Xi, barely into his second year of leadership, would have had plenty of time to compensate. But unlike his predecessors Jiang Zemin and Hu Jintao, Xi was not selected for the top leadership by a revolutionary-era Communist Party leader. Neither Mao, nor Deng designated him to carry on the banner of the Chinese Communist Party. Consequently, his legitimacy is more open to question than any previous leader. As important, of the seven members of the ruling Politburo Standing Committee, only two—Xi Jinping and Premier Li Keqiang—can stay on in 2017; the other five have to retire. This means that 2016 and 2017 will likely see Xi (and Li) jockeying to place their own people onto the twenty-five-member Politburo and the seven-member Politburo Standing Committee. A weak Xi is likely to find it difficult to dominate such a power struggle.