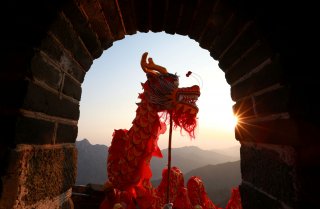 If the Great Wall of China was the symbol of its past reclusiveness from the rest of the world as some have asserted, then Xi Jingping’s thought policing has created an Internal Great Wall that still exists today.

Before building the Great Wall, China was technologically advanced. The Chinese people had accurate clocks, crossbows, compasses, and even successfully deep-drilled for natural gas. Yet when China built the Great Wall for protection during the Ming Dynasty, they began to lag increasingly further behind. By decreasing their interaction with the rest of the world, they wound up missing out on the Industrial Revolution. Their own only started some forty years ago.

Since China began to open its economy in the 1980s, it has made incredibly rapid steps and become a near-peer economically to the United States. Yet though China appears technologically advanced today, since Xi Jinping’s arrival as president and paramount leader, the Chinese Communist Party’s increasing thought suppression of its own citizens—Xi’s Internal Great Wall—has driven the country further backward, not forward.

In controlling Chinese citizens’ political activity, Xi’s CCP has used subtle propaganda methods, overwhelming the web with positive stories about the Chinese government to distract its citizens from ideas that are more threatening to the regime. The CCP has even gone so far as to rewrite textbooks since, in the words of Xi himself, they believe presenting a positive “China story” will smooth the path for investments that benefit China’s economy.

Xi has used these tactics to attempt to propel China ahead of other nations, in the long-term goal of being the leading global superpower. But by teaching the Chinese people to quell any thought contrary to Party purposes, the CCP has created serious problems for itself—namely, that even with its leads in technology acquisition, China still falls far behind the United States in innovation and ingenuity.

As Elizabeth Economy points out in her 2018 book, The Third Revolution: Xi Jinping and the New Chinese State, China’s tight rein on the internet has been a proven damper on innovation. Economy records how Chinese scientists are at a severe disadvantage, not only because they can’t access leading scholarships online through Google, but because their own research can’t be successfully disseminated online—making it almost impossible to be competitive in the global scientific community.

Economy quotes Chinese scientist Zheng Wan to illustrate how much of a handicap this is:

“With no access to Google scholar—which I prefer over other search engines, because it combines books, papers, theses, patents and technical reports—I have to keep track of trends by individually searching the databases operating by publishers that are still accessible” (101).

The CCP’s censorship extends far beyond the internet, however. Since 2014, China’s government has been closely monitoring its citizens and ranking them based on a social credit system, wherein people are penalized for posting fake news, as defined by the CCP, among other things. If a Chinese citizen doesn’t have enough social credit, then she is unable to travel, her Internet speed is throttled, her children aren’t allowed to attend good schools, and she is barred from the most desirable jobs.

In 2015, we learned the social credit system also includes a blacklist. Li Xiaolin, a lawyer placed on the list, found he could not purchase plane tickets or apply for a credit card, regardless of his social credit score.

Xi hasn’t stopped there. In 2017, the Chinese government was already installing the Beidou satellite navigation system, which launched last month in every Chinese vehicle. The GPS-competitor is said to track location within one meter of accuracy. Meanwhile, even those without vehicles can be tracked by the CCP through the two mandatory apps on every cell phone: “Web Cleansing” and “Citizen Security,” which control and collect data from the population.

In addition to tracking citizens’ every move, Xi’s CCP has actively silenced dissenting voices—even whole people groups, like the one million Uighurs currently held in “re-education camps” in Xinjiang China today. Since 2016, the Chinese government has admitted to using the Integrated Joint Operations Platform, a regional data system that uses artificial intelligence to monitor, identify, and target Uighur Muslims at countless checkpoints in Xinjiang. The IJOP can immediately warn police when a person enters any public place, whether that’s a bank, hospital, shopping mall, or park. The program also alerts the government if an increasing number of Uighurs gather in the same area in a short period of time.

More devastating is the knowledge that these Uighurs held in “re-education camps” are forced to labor, listen to hours of Communist Party propaganda, renounce the reading of the Koran, and eat pork for their crime of belief.

In all of this, Xi’s objective is a tight rein on the Chinese population, with the belief that this will promote a strong, united China to the rest of the world. But the reality is that as each of Xi’s predatory police tactics is discovered by the rest of the world, the world is increasingly suspicious of doing business with such a regime—as it should be.

Like the Great Wall of generations past, Xi’s Internal Great Wall will continue to keep China behind the rest of the world because a nation that suppresses its own people is not a nation the world can trust to do business fairly. The more China isolates its people from the world, the more the world will leave them behind in the dustbin of history.

Rep. Mark Green is a decorated combat veteran, successful business leader, and ER physician. He served on the mission to capture Saddam Hussein, and he interviewed Saddam Hussein for six hours on the night of his capture. He serves on the House Oversight and Homeland Security Committees.