Xi Jinping and China’s Future: The Bigger Problems Lie Within 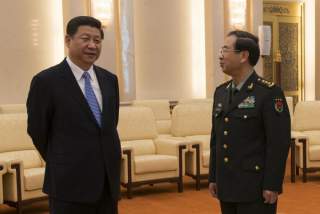 The apparent rise of China’s assertiveness in Asia has attracted a great deal of interest in the lead up to Xi Jinping’s upcoming visit to the United States to meet with President Obama. Such a focus has been driven by Beijing’s ongoing efforts to bolster its territorial claims in the South China Sea. It was underscored on September 3rd by the display of a new array of military hardware during China’s commemoration of the 70th anniversary of Japan’s surrender that ended World War II.

These developments are cause for concern as they raise questions regarding the overall orientation of China’s foreign policy, its relationship with the rest of Asia, and more broadly the United States. As such during Xi’s state visit to the White House we can expect that President Obama will press his Chinese counterpart on these issues.

However, of even greater import are changes that the Chinese leader appears to be making inside his country. Over the last several years Xi’s government has narrowed the space within China for freedom of speech and the expression of dissenting viewpoints. This trend has been characterized by a visible escalation of censorship of the Chinese Internet and social media outlets, growing restrictions upon the country’s press, and efforts to bring its academics and intellectuals to heal on a wide variety of issues.

It is overly alarmist to contend that such policies are bringing China back to the isolationism of its not so distant Maoist past. However, it is accurate to observe that they have endangered many of the nascent openings between the country and the outside world. They have also begun to seriously encroach upon the limited rights and freedoms that the Chinese people had recently begun to enjoy.

This development is worrisome as American policy toward China since the end of the Cold War has been premised on seeing it move in the direction of a deeper integration with the rest of the international system. Despite Beijing’s reservations about “peaceful evolution,” and its vociferous objections to perceived interference in China’s internal affairs, in a broad sense the country has followed such a path. It moved, albeit fitfully, and not without great hesitation, toward becoming a member of an internationally society which values individual rights and freedoms. It was a country that was confident enough to allow its citizens some space to express themselves (at least sometimes).

Xi’s efforts to wall China off cut against the grain of this pattern. Such a move is a more momentous shift in Chinese politics than whatever changes he has enacted in the foreign policy arena. It is potentially seismic in its scope and implications.

This being said, it is unclear that Xi can succeed in such efforts. On the one hand, he appears to enjoy broad support throughout the country. On the other hand, the list of social, economic, and environmental grievances within China is long, and in the wake of recent events only likely to expand. In other words, the Chinese economic and political system is under a great deal of pressure, and it is unclear where Xi’s efforts to put a lid on these developments will end.

The bigger problem with China then is not how it is approaching its neighbors, but how its government is handling its own people. Given China’s rise the days have probably passed when an American leader can lecture to his Chinese counterpart regarding issues of human rights and individual freedoms. However, it is not too late to remind Xi that closing China off is unwise.

China has grown over the last decades by gradually, incrementally, dismantling barriers between itself and the rest of us. Putting such boundaries back up will limit China’s ability to innovate and change, and hamper its growth as a global power. Only a weak, backward looking state would be compelled to prohibit such trends. If China is indeed as strong as Xi likes to portray it to be, he should feel no need to continue constraining the Chinese people. If he does, then perhaps, his country is much less than many assume it to be.