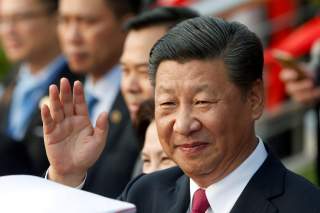 China’s official Xinhua News Agency on Sunday reported that the Communist Party’s Central Committee has recommended the scrapping of the country’s two-term limit for the office of president of the Chinese state.

If the National People’s Congress adopts the measure at its annual meeting this month—passage looks likely despite increasingly stiff internal resistance—Xi Jinping will be eligible for a third term in 2023 as well, of course, for successive ones. At the moment, he has not yet completed his first.

The ending of the presidential limit is by no means the most significant move China’s bold leader has made to consolidate power over the past year. It is, however, the one that has triggered widespread condemnation, in China and elsewhere. And it could eventually lead to the end of communist rule in that country.

By itself, the end of this term limit is relatively unimportant. If China’s presidency, largely a ceremonial post, has any significance, it allows Xi to deal with national leaders who are squeamish about interacting with someone with only party posts.

Xi’s real power rests on two other roles comprising “the trinity system.” His most important position is general secretary of the Communist Party’s Central Committee. There are no term limits on that post. Xi is in his second five-year term as the head of China’s ruling organization.

The last component of the trinity is the chairmanship of the Party’s Central Military Commission, another position without term limits.

Xi, for the moment, holds all three positions. And he obviously wants to continue doing so. The most far-reaching development in Chinese politics in recent years is that at the 19th Communist Party National Congress, held last October, Xi broke convention by preventing the designation of a successor. He did that by making sure no one who might follow him was named to the Politburo Standing Committee.

Moreover, as John Pomfret pointed out in the Washington Post, Xi actually targeted an up-and-coming figure, Sun Zhengcai from Chongqing, by having him detained for “serious discipline violations,” the code phrase for corruption, ahead of the 19th Congress.

By the end of October, therefore, Xi had ignored Communist Party norms and confirmed long-held suspicions that he intended to rule indefinitely. These norms, which before Xi had been hardening into rules, limited Chinese leaders to two five-year terms as general secretary and two five-year terms as president. Moreover, successors to a leader, according to the developing Party rules, were picked at the beginning of that leader’s second five-year term as general secretary.

The effects of the abolition of the presidential term limit are bound to be bad. The proposed constitutional amendment is roiling Chinese society and politics, it has deinstitutionalized the country’s political system, and it will make sound governance extremely difficult.

And there is one other effect. Xi’s grab for absolute power—the only way to interpret his quest to abolish a term limit for a relatively insignificant post—captured the attention of the world.

The attention-grabbing move is resulting in a stark change in the worldwide narrative. Before, the consensus was that an unstoppable China was replacing an America “in retreat.” Now, the global discussion is focusing on a China rushing to catastrophe.

There are many reasons to see catastrophic consequences. The “rules” Xi Jinping is destroying have been credited with minimizing the nation-shaking disruptions caused by political struggles, like the decade-long Cultural Revolution and the earlier Anti-Rightest Movement.

These struggles were the result of Xi’s hero, Mao Zedong. Deng Xiaoping, who made himself China’s leader by tossing out Mao-heir Hua Guofeng, reduced the cost of losing political battles so they could not tear the Party apart. To his credit, Deng treated Hua relatively well after removing him from power.

As a result of Deng’s moves, many foreigners, including long-time regime critics like Andrew Nathan of Columbia University, thought the Communist Party was well on the path to institutionalizing itself, and this, of course, created optimism about the country’s prospects. Optimism, in turn, resulted in foreign support for the Party itself.

Yet many, supporters and critics alike, misperceived the nature of China’s system by overestimating its strength. There was calm in the post–Mao years largely because Deng was strong enough to pick not only his successor, Jiang Zemin, but also Jiang’s successor, Hu Jintao. Deng was not in a position to pick Hu’s successor, and it is no coincidence that the post–Deng calm is coming to an end during the rule of Xi Jinping, who followed Hu.

Now, thanks to Xi, there is division in China’s ruling group. Reuters, for instance, is reporting that Xinhua’s press release “was designed to railroad” recalcitrant members of the Central Committee, and those brazen tactics are evidently causing even more friction in a badly split Party leadership.

The Party in the post–Mao era has been able to manage its “miraculous” rise in large part because of an extraordinarily benign and supportive international environment. For more than four decades, for example, U.S. presidents have believed it was in America’s interests to support the integration of China into the international system. Other countries have even longer histories of “engagement” of Beijing. Engagement was premised on the notion that China’s political system and economy would evolve in positive directions, and Americans and others acted accordingly.

Xi, by trying to hold onto a ceremonial post, has made it clear that his vision for the country is more Maoist than modern. That, by itself, reduces the incentive to continue generous—and often indulgent—approaches to Beijing.

The risk for Xi is clear. The increasingly pro-Beijing South China Morning Post captured the mood of the moment in a headline on Monday: “End to Term Limits at the Top May Be Start of Global Backlash for China, Analysts Say.”

Moreover, if China is fragile, as some are now correctly arguing, there will be even less reason to believe that Beijing must be accommodated. These days, and as far back as the Clinton presidency, many have maintained it would not be wise to upset the future owner of the twenty-first century.

In the last few days, the view of a dominant China is being questioned. As Tom Pepinsky of Cornell University tweeted Sunday, “I’m no China expert, but centralizing power in the hands of one leader sounds like the most typical thing that a decaying authoritarian state would do.”

In short, China is beginning to appear weak as well as hostile and dangerous.

That is not a formula for success for a country that still needs a supportive environment. In fact, it looks like a recipe for regime failure.