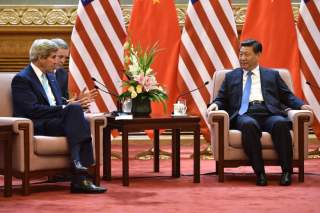 The ascent of Xi Jinping, beginning in late-2012, to the helm of China’s political system has coincided with growing tensions across the South China Sea. Far from calming the boiling waters on China’s peripheries, the new Chinese leader has upped the ante by expanding the country’s paramilitary patrols, as well as construction and energy-exploration activities across disputed features, from the Paracels to the Spratly chain of islands. Beijing has also flatly rebuffed recent attempts by the Philippines and the U.S. to de-escalate tensions in the South China Sea, particularly the widely-supported Triple Action Plan (TAP), which calls for a freeze on construction activities and other forms of provocative actions in the disputed areas, the development of a legally binding Code of Conduct (CoC), and the resolution of the disputes in accordance with international law. Recently, Filipino authorities have also warned about the presence of Chinese surveillance ships close to the hydrocarbon-rich Reed Bank, which lies well within the Philippines’ Exclusive Economic Zone (EEZ).

China’s maritime jostling, under the Xi administration, has come as a huge disappointment to neighboring countries such as the Philippines, which back in 2012, fervently hoped that the departure of the Hu Jintao administration would pave the way for the emergence of a more confident and stable leadership in Beijing. In the view of some neighboring governments, the Hu administration lacked the wherewithal and political capital to rein in hardline elements within the Chinese state apparatus, both civilian and military, who advocated for a more forceful Chinese posturing in the Western Pacific. After all, the Hu administration was overwhelmed by brewing socioeconomic troubles at home, as Beijing struggled to maintain robust growth rates and contain spiraling inflation, corruption and protests in the heady aftermath of the 2007-08 Great Recession. Historically, autocratic regimes, lacking democratic legitimacy, tend to compensate for domestic vulnerability by projecting a tough image abroad. As perceptive scholars such as Robert Ross observed: “Beijing’s tough [territorial] diplomacy stemmed…from a deep sense of insecurity born of several nerve-racking years of financial crisis and social unrest.”

Unlike China’s paramount leaders, Mao Zedong and Deng Xiaoping, President Hu lacked the necessary charisma and bureaucratic prowess to inject discipline into the country’s floundering territorial diplomacy, which encouraged many neighboring states to welcome a greater American strategic footprint in East Asia—undermining a decades-long Chinese strategy aimed at establishing a “sphere of deference” in the region.

Widely seen as a consensus candidate among China’s outgoing leaders, in the Central Politburo Standing Committee of the Communist Party of China (PSC), Xi represented a potential game changer—not only for the country’s domestic politics, but also for its foreign policy. So far, he has overseen an uptick in China’s territorial assertiveness, accompanied by the growing consolidation of bureaucratic power under his control. As Xi gradually emerges as China’s next paramount leader, however, he will also increasingly be in a position to introduce major changes to the country’s foreign policy, which would potentially open up the space for a diplomatic compromise—or at least a much-needed de-escalation—in the maritime disputes in the Western Pacific, especially in the South China Sea.

In many ways, Xi Jinping has the potential to become one the most consequential Chinese leaders in recent history. His late father, Xi Zhongxun, was among the founding members of China’s Communist regime, later emerging as a major proponent of economic reforms and a respected reformist leader within the Chinese Communist Party (CCP). As a pragmatic and highly respected leader, Xi Jinping himself oversaw an economic boom in Fujian and Zhejiang, blending market reforms with an effective brand of hands-on governance, including a high-profile anticorruption crackdown during his tenure in Zhejiang. He also enjoyed cordial ties with the People’s Liberation Army (PLA), partly thanks to a previous stint as an aide to Geng Biao, a former secretary general of the Central Military Commission (CMC) and minister of national defense.

True to form, Xi began consolidating power as soon as he took over the key organs of the Chinese political system, placing himself at the center of all important decision-making processes and reorganizing the bureaucracy to enhance his personal control. From early-2013 to early-2014, he began presiding over newly created and important state organs, such as the National Security Commission, the Central Leading Group for Comprehensively Deepening Reforms, the Leading Small Groups on foreign and security affairs, as well as the Taiwan Affair and a new group tasked with overseeing military reform. Traditionally, the Chinese premiere has been tasked with overseeing economic affairs, but Xi couldn’t resist outshining his deputy, Li Keqiang (protégé of Hu Jintao), by also chairing leading groups on financial and economic affairs. Xi has also engaged in a historic anticorruption crackdown, which has led to punishment of up to 182,000 officials. So far, Bo Xilai, the former party chief of Chongqing, and his patron, Zhou Yongkang, the former internal-security Czar and member of the PSC, have featured as the most high-profile victims of Xi’s unprecedented crackdown.

At the heart of his agenda is a commitment to contain chronic corruption within state institutions, shepherd China towards a more sustainable model of economic development and reassert Beijing’s grip on the peripheries of the Sinosphere, from the autonomous regions of Xinjiang and Hong Kong, to (de facto independent island of) Taiwan—issues that are considered as “core interests” to China’s leadership.

Xi has sought to carve out a legacy for himself in China’s history by promoting the slogan “China Dream”, a vision to restore China’s historical grandeur, which was punctured by the colonial incursions (of Western powers and later Japan) from the mid-nineteenth century up until the end of the Second World War. For the country’s leadership, China is not a rising power per se, but simply returning to its rightful historical stature. Thus, China’s new generation of leaders believes that it is just natural for China to leverage its rising economic (and military) prowess to shape the regional order along its preferences.

Against the backdrop of rising popular nationalism in the country, Xi has often adopted tough rhetoric on China’s territorial disputes with neighboring countries, declaring “no country should presume that [China] will engage in trade involving our core interests or that we will swallow the ‘bitter fruit’ of harming our sovereignty, security or development interests”. China maintains that it has “inherent” and “indisputable” sovereignty over much of the South China Sea, increasingly treating them as core interests. Recently, he also made an unusually high-profile visit to a special ceremony marking the defeat of Imperial Japan by Chinese forces during the Second World War. In what sounded like an “Asia for Asians” kind of rhetoric, Xi didn’t shy away from a thinly veiled criticism of Washington’s pivot to Asia policy. On the sidelines of the fourth Conference on Interaction and Confidence-Building Measures in Asia (CICA) summit in Shanghai, he argued "Asia countries should all cooperate to resolve security issues in the region…a third party aimed at enhancing military alliances in the region does not serve our interests." It was a thinly-veiled criticism of American strategic reengagement with Asia, and, one could argue, an implicit call for Chinese leadership in the region.

Nonetheless, down the road, there could be a silver lining: Xi’s ongoing attempts to tighten his grip on the Chinese state apparatus could introduce more discipline and predictability to the country’s maritime policy. During the previous administrations, particularly under Hu Jintao and Jiang Zemin, one of the most challenging aspects of the territorial disputes in the South China Sea was the highly fragmented nature of the Chinese maritime bureaucracy, involving eleven ministerial-level government agencies, which, in turn, oversaw five law-enforcement agencies. Dubbed as the “five dragons contending for the sea”, China Marine Surveillance (CMS), the Border Control Department (BCD), the Fisheries Law Enforcement Command (FLEC), the General Administration of Customs, and the Maritime Safety Administration (MSA) jostled for influence over China’s territorial claims in the South China Sea, with each agency pursuing its own bureaucratic interest and strategic vision in the disputed waters.

On a macro level, leading law-enforcement agencies, particularly the CMS and the FLEC, had to contend with other major actors in shaping Beijing’s policy in the South China Sea: Namely, the provincial government in Hainan (and to a certain degree, also those in Guangdong and Guangxi), which have a direct stake in the rich marine resources in the disputed waters, the PLA Navy (South Sea Fleet), which has vociferously lobbied for increased defense spending and expanded strategic presence across the Western Pacific in recent decades and the Chinese Foreign Ministry, which has largely sought to prevent a diplomatic breakdown with rival claimant states.

No wonder, other claimant states have wondered whether China has had any standard, unified policy on its territorial claims. This presented two key problems for the region: (a) with multiple competing actors shaping China’s territorial policies, the risk for unintended clashes and rogue activities by hardline elements progressively increased; and (b) the Chinese Foreign Ministry gradually lost its long-privileged position as the main diplomatic bridge between Beijing and its worried neighbors, who began to doubt whether Chinese diplomats carried the necessary mandate to negotiate any lasting solution to the brewing maritime disputes in the South China Sea.