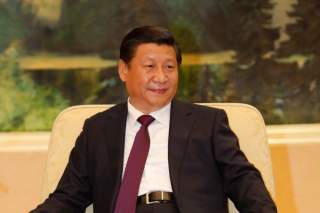 For a country that has accumulated great power and stupendous wealth in recent years, and whose “meritocratic” political system is supposedly leaving democracies in the dust, China’s behavior has been rather odd of late, its regime acting more like a fearful government than an in-group that has the situation well under control. Highly paranoiac and increasingly retributive, President Xi Jinping’s Beijing doesn’t inspire confidence—not among the Chinese people, and not among those who live on China’s “peripheries,” who have taken note of the erosion of liberties that has accompanied this slow descent.

Given its accomplishments over the years, from a booming economy that has lifted millions of people out of poverty to Beijing’s emergence as an indispensable player in global affairs, we’d have assumed that China would have become more self-confident and therefore more willing to accommodate different voices within its society. After all, the Chinese Communist Party (CCP) has performed rather well on most of the issues that presumably contribute to the legitimization of the party in the eyes of the Chinese people: economy, prestige, and respect.

A more self-assured party that has earned the respect of its people would perhaps even have considered taking the first steps toward political liberalization, a gradual opening up that, while not allowing for pluralism (which remains anathema to the party), could nevertheless have created more space for dissent, civil rights, and the free dissemination of information across society.

But it wasn’t meant to be. Instead, the world’s No. 2 economy has turned in the other direction and threatens to take the country back to an era that most Chinese believed had been buried. Consequently, China is looking increasingly like a police state. Mr. Xi’s anti-corruption campaign, while initially welcomed by the public, has acquired the flavor of a witch hunt in which potential opponents of Mr. Xi, real or imagined, are targeted for various “violations” of discipline and law. Given the often contradictory and certainly arbitrary nature of China’s legal system and tax code, the CCP has dirt on practically anyone and can use this pervasive ambiguity to take would-be opponents out of the game.

Whether the campaign has slipped from Mr. Xi’s control and taken on a life of its own, or was indeed designed to eliminate all his opponents, is the object of debate among China watchers. What is certain, however, is that the current environment, in which one can be part of the in-group one day and targeted for various crimes the next, has echoes of Mao’s China or the Stalin’s Soviet Union.

Even more worrying are signs of a hardening against society itself, as exemplified by the new draft Cyber Security Law, a crackdown on bloggers, and the just-passed new National Security Law, whose broad and vague definition of national security promises further restrictions on free speech and even engages in extraterritoriality by imposing “responsibilities” on the people of Taiwan, a country that has its own national security laws.

The recent detention and disappearance of more than 100 human rights activists and lawyers in a nationwide crackdown against what the authorities described as a “major criminal organization” also signals a marked escalation in state repression of civil society. The move, as well as the death of Tenzin Gelek Rinpoche in a Chinese prison, where he was reportedly denied medical treatment for his heart condition, sparked global condemnation. Along with the arrests, his death has sparked protests against various Chinese diplomatic missions overseas, among them the Chinese consulates in New York City and San Francisco.

All of this—the new stricter laws, the crackdown on non-governmental organizations, lawyers, bloggers, web sites, and journalists—is indicative of a government that does not have the situation under control, a situation that is unlikely to be helped by the recent stock market crash. Rarely is authoritarianism a signal of strength; instead, it stems from fear, paranoia, and panic—hardly the “meritocracy” whose merits Daniel A. Bell vaunts in his new, and not uncontroversial, new book The China Model.

Another problem for Mr. Xi is that the growing repression in China is being noted by people on the “peripheries” who are apprehensive about what this might mean for them. Chief among them are the people of Hong Kong, who under “one country, two systems” have already felt the effects of the mainlandization of the political sphere and whose liberties face further constraints under the new National Security Law, whose purview includes the Special Administrative Region (as well as Macau and presumably Taiwan). The intensification of repression in China proper will inevitably have an effect on civil society in HKSAR, which has already demonstrated its willingness to stand up to Beijing on issues such as genuine universal suffrage.

Whether the crackdown in China and the new regulations will cow the residents of Hong Kong into submission or encourage them to intensify their campaign remains to be seen. My bet is on the latter outcome, which if I am right presages future unrest in HKSAR.

Perhaps even more detrimental to Mr. Xi’s cause is the effect that the ongoing repression across China is having on Taiwan, which Beijing maintains is part of China awaiting “re-unification.” Although the two sides of the Taiwan Strait have joined in a process of rapprochement since 2008, opposition to unification among the Taiwanese public—from support for de jure independence to a desire to maintain de facto independence under the “status quo”—has remained very high. Among the 15.5 percent of Taiwanese who, according to the latest Taiwan Mood Barometer Survey, support unification with China at some point, only 4.2 percent want such an outcome “urgently”—in other words, irrespective of the current political situation in China. The remaining 11.3 percent, who want the “status quo” for now and would consider unification in future, tend to make the democratization of China a precondition for possible unification.

With all the trend lines in China pointing in the opposite direction, it is difficult to imagine how China could succeed in engineering the “peaceful” unification of Taiwan that the recent détente was supposed to lead to. In fact, the crackdown on Chinese society is having the opposite effect and is hardening the desire among Taiwanese of all political persuasions (the 4.2 percent hardline pro-unification types notwithstanding) to maintain their nation’s independent status. Regardless of the outcome of the January 2016 presidential and legislative elections in Taiwan, the CCP’s intensifying assault on Chinese society will make it increasingly difficult for any government to enter political negotiations with Beijing, let alone on matters that pertain to the sovereignty of Taiwan.

A political system that was already unpalatable to the Taiwanese, who are proud of their rowdy democracy, has become even more unappealing thanks to recent developments in China. Ironically, the hard measures that have been implemented in China recently will make the dream of Chinese “re-unification,” another instrument of self-legitimization for the CCP, a far less achievable one.

Mr. Xi, undoubtedly a proud Chinese nationalist, is struggling to keep it all together, a feat that, given the complexities of China’s society and geography, would be challenging to any leader. But if his “meritocratic” advisers are as meritorious as they are said to be, they would perhaps counsel leniency and tolerance rather than the kind of institutionalized repression that will likely send ripples across China and beyond.

J. Michael Cole, a former analyst at the Canadian Security Intelligence Service, is editor in chief of www.thinking-taiwan.com, a senior non-resident fellow at the China Policy Institute, University of Nottingham, and an Associate researcher at the French Center for Research on Contemporary China (CEFC) in Taipei. His latest book, Black Island: Two Years of Activism in Taiwan, was published in March. He can be found on Twitter at @JMichaelCole1.