Xi Jinping Is Now China's President for Life. What Would Machiavelli Think? 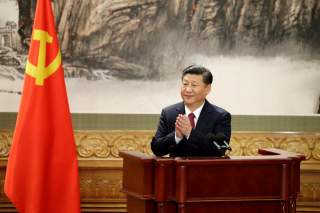 News reports indicate that the Chinese Communist Party (CCP) stands poised to amend China’s constitution to cancel term limits for the presidency. Presumably the related custom that the CCP general secretary must surrender power at a given age will give way as well. If so, abrogating term limits will let Xi Jinping remain the party supremo and China’s president so long as he deems fit. “Essentially,” contends Professor Willy Lam of the Chinese University of Hong Kong, Xi has “become emperor for life.”

What would the shade of Niccolò Machiavelli—Renaissance Italy’s theorist of bare-knuckles statecraft—make of these developments?

In all likelihood Machiavelli would assign President Xi and the party leadership mixed marks while projecting a bleak future for China under strongman rule. Xi has gone to drastic lengths to purge his opponents from the party apparatus under the guise of combating corruption. Such measures would win plaudits from Machiavelli, who prescribed cutthroat methods for amassing, husbanding and exercising political power. At the same time, though, he pooh-pooh’ed any individual ruler’s ability to cleanse a state of its corrupt ways.

And although Machiavelli wrote his most famous work, The Prince, to ingratiate himself with an autocrat—his eponymous prince being Lorenzo de’ Medici, grandson of the legendary Lorenzo the Magnificent—the Florentine scribe was no cheerleader for autocratic rule.

First, Machiavelli might award some accolades. He would instantly comprehend Xi’s purpose and methods. He was a keen student of how to found and maintain regimes, and prescribed a simple formula for the would-be founder of a new order such as China’s presidency for life. Namely this: do away with stakeholders in the old order by any means necessary. Warns Machiavelli, “whoever . . . does not secure himself against those who are enemies to that new order makes a state of short life.”

Machiavelli harnessed classical Roman history, chiefly as related by Titus Livy, to instruct princes and republican leaders. His Discourses on Livy provides a fount of insights into events in China, where his brand of power politics—never altogether abolished—is making a comeback. (For any purists out there, I’m mixing and matching quotations from the translation of the Discourses by Harvey Mansfield and Nathan Tarcov and the one by Peter Constantine.)

Machiavelli recounts Livy’s tale of the sons of Brutus, consul of Rome, to make his point about eradicating foes of a new regime. Roman republicans had just deposed the Tarquin monarchy, and Brutus’ sons intrigued to bring the kings back. Why? “As the history shows,” observes Machiavelli, the youths “were induced to conspire with other young Romans against the fatherland because of nothing other than that they could not take advantage extraordinarily under the consuls as under the king, so that the freedom of that people appeared to have become their servitude.”

In other words, the sons of Brutus subverted the republic because they couldn’t turn its institutions to their personal gain. Their enmity left the fledgling regime in an uncomfortable predicament: “a state that is free and that newly emerges,” contends Machiavelli, “comes to have partisan enemies and not partisan friends.” Those who profited by the old order become implacable foes of the new order, while friends of the new order hedge their bets until and unless the new rulers consolidate their hold on power.

In other words, the new republic faced resolute opposition while commanding only tepid support. The consul had to vanquish Rome’s enemies in dramatic fashion to win wholehearted allegiance from the populace. “If one wishes to remedy these inconveniences and . . . disorders,” maintains Machiavelli, “there is no remedy more powerful, nor more valid, more secure, and more necessary, than to kill the sons of Brutus.” Brutus oversaw the scourging and beheading of the conspirators—and endeared himself to generations of republicans.

Brutus ranked among the founders of a liberal regime while Xi Jinping is rolling back constraints on his power and authority. Still, Machiavelli would understand and probably condone Xi’s methods, if not his purposes.

Second, Machiavelli was a skeptic toward anti-corruption campaigns. How deep the corruption goes worried him in particular. Had the Tarquin monarchy endured for two or three more generations, he maintains, and if the corruption had spread from the kings throughout the “branches” of the regime and society, then “once the branches were corrupted, it would have been impossible ever to reform Rome again.” Only the “goodness and skill of a single ruler” could heal the state—and then “only for the duration of that ruler’s life.”

Virtue is perishable, it seems.

Machiavelli thus issues a grim finding: once a state is corrupted, “even the soundest laws are of no use unless they are enacted by someone who can ensure with great force that they are observed, so that the state’s nature becomes good.” He questioned whether any prince had ever pulled off such a feat—and whether it was even possible. But even if lightning does strike, “the moment that ruler dies, the state will regress” to its bad old ways. “The reason,” he concludes, “is that no man can live long enough to tame a state that has had bad habits for a long time.” Only a prince gifted with “an exceptionally long life” might stand some chance of straightening out a crooked state.

Xi Jinping is sixty-four years old at the outset of his presidency for life. Does he have the enlightenment and longevity to do what Machiavelli doubts anyone can do? Italy’s master of statecraft would bet against it.

And lastly, Machiavelli cautions posterity to beware of autocratic rule, even apart from the question of corruption. A society might endure one-man rule for the lifetime of a virtuous leader, but perils arise when the time comes for a new ruler to succeed to power. Machiavelli warns against hereditary succession in bracing language, but what really seems to worry him is the prospect that a successor will be anointed for some reason other than merit. Birth is no qualification to rule, but neither is currying favor with the current ruler.

Whom Xi grooms for future leadership—if anyone—will say much about China’s prospects under its new prince.

And that’s the main hazard of having one ruler for life, isn’t it? Too much depends on the character, farsightedness, and political and strategic dexterity of a single prince, or president, or general secretary. But even if a society does luck into an enlightened despot, there’s no guarantee the next strongman will display the same healthy traits. In fact, the odds are against it according to the sage of Florence.

James Holmes is J. C. Wylie Chair of Maritime Strategy at the Naval War College and coauthor of Red Star over the Pacific (second edition forthcoming this October). His personal blog is The Naval Diplomat, https://navaldiplomat.com. The views voiced here are his alone.