Xi Jinping Will Usher in a Dark Age for China 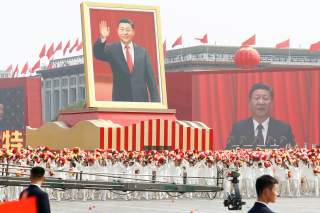 Today marks the seventieth anniversary of the People’s Republic of China.  In the Communist world, the anniversary of the Party’s seizure of power is always employed to send political messages. This is particularly true on this occasion.  We expect China’s leader, Xi Jinping, to use the occasion to glorify himself as the savior of China, celebrate his rise to power by boasting the Chinese Communist Party’s (CCP) accomplishments under his leadership, and herald a new age of repression.

Xi Jinping needs this event to save face from the humiliation he suffered from the Hong Kong protests, to distract attention from his mismanagement of Sino-American relations, to shore up his rule against his political enemies, and to demonstrate his popularity. However, most importantly, he needs the historic event to rally the Chinese people in support of the CCP’s struggle against the United States.

Like his role model, Mao Zedong, Xi will tout himself to be the creator of a “New Era” for China in which he, as the strongest leader since Mao, has led the CCP as it has undergone historic changes and achieved unprecedented accomplishments culminating in what he and his acolytes refer to as the “great national rejuvenation.”  He will advance three messages.

First, Xi and his clique will explain to his followers why he is the equal of Mao Zedong and has further advanced and improved Marxism-Leninism-Maoism, perhaps hinting that it should be Marxism-Leninist-Maoism-Xiism as his intent is be their equal and join the Communist pantheon. Only he will restore the Middle Kingdom’s past glory and secure China’s rightful place in the world which will be achieved by 2049, the PRC’s centenary.

Second, Xi will convey China’s global strategy in veiled and honeyed terms.  Under his leadership, the world has witnessed China rising beyond regional power into superpower status.  He will continue to advance a new global governance framework that is benignly termed “the common destiny of mankind,” less benignly, Chinese domination, and tout the “Belt and Road Imitative” as an alternative for democracy, free market, and the existing international order.  He will promise a better and more prosperous life, not just for the Chinese people but for people all over the world.

Third, Xi will explicate to his audiences that China’s problems are really the fault of a sinister United States.  The United States is Xi’s major enemy because it threatens China’s regime security via the threat of “color revolutions,” and it stands in the way of China’s rise and the realization of its global ambitions.

Xi’s boasts are alarming because they signal directly that he is an aggressive and dangerous dictator whose vision for China is retrograde and oppressive.  His rule will likely result in unprecedented disaster for China, and, indeed, the world too, as his actions will adversely affect the global community.

Thus, the world should also use the occasion to reflect on the CCP’s rule.  As it does so, it must j’accuse, and present the crimes of Xi Jinping and the CCP.

First, we accuse the CCP of seventy years of tyranny.  As the CCP and the Chinese people contemplate the past seventy years, it is impossible to escape the conclusion that China has suffered seven decades of years of misrule precisely because of the one-party dictatorship under which tens of millions of people were killed or starved to death. This totalitarian system Mao created is as barbaric, dehumanizing, and brutal as what was created by the Nazi and Soviets.  The difference is that those regimes are in the dustbin of history while the CCP remains.

Second, we accuse the CCP of perpetuating a colossal lie.  Whenever the CCP is criticized over its misrule, its reflexive reaction is to justify its oppression by explaining that China today has transformed from deep poverty and penury to the world’s largest economy, only next to the United States.  No doubt, China’s opening to the outside world over the past three decades has lifted many Chinese out of poverty.  That does not justify the profound cost to the Chinese people, including mass killings and China’s denial of its citizens’ political and civil rights. That does not justify the fact that China has enriched the CCP elite through corruption and other gross abuses of public power.

But it is dishonest to claim that the CCP did this.  In fact, the West did it.  This critical point is seldom recognized even in the West:  The West should be rightfully credited with this accomplishment because Western decisionmakers allowed China into the West’s economic ecosystem.  Western economic might and technology lifted these hundreds of millions of Chinese, and many more hundreds of millions worldwide.

It is correct to recognize that due to CCP policies, China’s rapid economic development was—and continues to be—achieved at very considerable costs.  These include the poor working conditions of Chinese workers, massive environmental pollution (which affects the health of the world’s population), food and pharmaceutical safety (which poisons people around the globe), millions American jobs lost, and over a trillion dollars worth of U.S. intellectual property theft. More significantly, the CCP’s intent of economic development is not to “serve the people” but itself. In short, it legitimizes its perpetual rule and modernizes its military in preparation for struggle with the United States and its allies.

Third, we accuse the CCP of building a massive dictatorial machine to oppress the Chinese people.  The CCP has survived seven decades not just because it has built such an apparatus devoted to coercion—recall Mao’s famous observation that power follows from the barrel of a gun—in order to seize and to keep state power.  It also remains in control because it uses an ideology and mammoth propaganda industry to control the information available to Chinese people, to incite ultra-nationalism, and to sustain numerous historical myths to deceive the Chinese people.  They are required them to hold the CCP’s ideology as their own.  However, China’s economic development has also awakened people’s awareness of political and civil rights.  In turn, this allows civil society to grow and introduces a potential threat to the CCP regime. Deng Xiaoping’s reforms and legacy caused a bottleneck for Xi Jinping when he came to power about six years ago.  Xi’s predatory character and limitless ambition has made him far more reckless and repressive than his predecessors—only Mao is his equal.  His megalomania and his weakness will compel him to overcompensate.  He is guiding China back to a nadir.

Fourth, we accuse Xi’s design of the “New Era” of being a grotesque effort to conceal the CCP’s power and the expansion of Chinese domination.  The “New Era” is one of control and oppression, and thus it is, in fact, very old school.  He contends that this “New Era” is based on the Party’s fourteen organizing principles, which must be upheld.  The core principle is that “the CCP leads everything, everywhere” and thus needs to build “a shared destiny of mankind.”  This shared destiny is to create a world modeled after China’s political system which, if realized. would condemn many states to oppressive rule.

Fifth, we accuse Xi of dictatorship.  Xi has ended presidential term limit, which was Deng Xiaoping’s principal political reform.  Unlike China’s rulers since Deng’s reform, Xi intends to rule China for life. This unrivaled power has allowed him to hijack the entire party and country. Increasingly, no one dares to criticize because the dictatorial machine has become far more sophisticated and refined in repression. It uses all the tools of the information age—artificial intelligence, big data, social media, and other technologies—to conduct mass surveillance of every person one every street corner in urban China, which greatly contributes to the precise suppression and persecution of dissent.  Xi is the bespoke tailor of repression.

Sixth, we accuse Xi of criminal corruption on an unparalleled scale.  He has reinforced and strengthened state socialist economy by plundering the wealth from private entrepreneurs. He has augmented state-owned enterprises to aid his position. He has refused the structural changes proposed by the United States to address China’s unfair trade practices and IP theft, reneged on a negotiated trade deal, and caused the escalation of tension between the two countries.

Seventh, we accuse Xi of aggression and preparing for conflict against China’s neighbors and the United States. Xi uses his modernized military to continue China’s military expansion in the South China Sea, to threaten Taiwan, to coerce Hong Kong, to foment hyper-nationalism, and to prepare for war against the United States, its allies, and other states in order to achieve hegemony.

Eight, we accuse Xi of ruining China.  China’s economy is worse off than it was at the dawn of his regime.  China is also less secure due to the maladroit actions of his regime.  The Chinese people are worse off as well.  Xi Jinping is demonstrating that he is indeed Mao’s equal in his megalomania and pursuit of disastrous policies that weaken China.  This is a dangerous situation for the Chinese people and the rest of the world.

It is lamentable that after seventy years, China is not only as dangerous to international stability as it was when Mao created it.  Still, it is more dreadful to realize that within a far shorter period of time, China’s economic, military, and political power will present an existential challenge to the free world and western civilization. It is unclear whether the world is ready to meet that challenge.