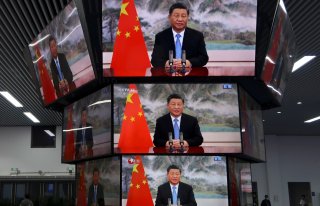 When Xi Jinping became China’s president in 2012, he feared the party he led was neglecting history. The situation was so dire that it could spell the Chinese Communist Party’s (CCP) ruin.

Within the first months of Xi’s tenure, he was warning in public speeches of the dangers of “historical nihilism”—party-speak for the neglect of history. “Historical nihilism” was a primary cause of the collapse of the Soviet Union, a fellow communist party-state. “There was a complete denial of Soviet history, denial of Lenin, denial of Stalin, pursuit of historical nihilism,” he explained in a leaked speech to Party officials. “The great Soviet socialist nation fell to pieces.”

This fear explains Xi’s efforts this past year to elevate party history to a pride of place it has only been granted twice before in the hundred-year history of the CCP. The first “Historical Resolution” came under Mao Zedong in 1945; the second under Deng Xiaoping in 1981. This third resolution marks a third revolution.

To Xi, the danger of “historical nihilism” remains a pressing concern. And the phrase has found its way into many of the party’s most authoritative documents ever since.

To combat this danger, Xi considers teaching the past a key mechanism for avoiding the Soviets’ fate.

So far this year, to address the risk of “historical nihilism,” Xi has launched a formal Party History Study Campaign—the largest ideological indoctrination effort since Mao’s time—overseen the release of a new 531-page history of the Communist Party, and put forward this landmark “Historical Resolution” last month at the party’s Sixth Plenum.

Of these three projects, the November historical resolution, titled, “Resolution of the Central Committee of the Chinese Communist Party on the Major Achievements and Historical Experiences of the Party’s Hundred-Year Struggle,” is Xi’s most consequential move to counteract the forces of “historical nihilism.”

The seventy-page historical resolution can be roughly divided into thirds: the first third is official history, the second third is policy proposal, and the final third is party propaganda.

“It is a forward-looking document, more about creating history than summarizing it,” writes one respected China watcher. “The idea of looking back is to look ahead to the struggle of the future,” adds another. “It is not really a resolution about past history, but a resolution about future leadership,” explains the New York Times.

As a result, many analysts’ commentary has focused on what the text of the resolution signals about the longevity of various Chinese policy initiatives such as “common prosperity” and the Belt and Road Initiative. The party history portion is wrongly treated as context rather than core content.

The two prior “historical resolutions” to appear in the party’s hundred-year history are not written in the style of narrative history; they are more narrowly theoretical documents, meant to buttress each leader’s standing in life-or-death bouts of party infighting. Mao used his resolution to silence rivals. Deng used his to emerge from Mao’s shadow. Xi, meanwhile, seems to be telling history for its own sake.

With no obvious rivals, there might seem to be no need to dedicate a precious plenum session to a new historical resolution. But in Xi’s mind, retelling party history is still a necessity—if not for personal political supremacy, then for the survival of the regime more broadly.

This sense of urgency becomes clear through the specific choice of historical reference points invoked in the resolution. Tellingly, a line about the “demise of the Soviet Union” sits in the same paragraph as an allusion to the party’s 1989 Tiananmen Square crackdown, and a direct causative link is implied between the two, demonstrating just how catastrophic the collapse of Communist rule in Moscow is considered in Beijing. More than that, too, it points to real and current anxieties about the vital need to remember history in order to prevent another Tiananmen-scale threat to the CCP today.

Constantly retelling Party history—or, in Xi’s words, working vigilantly to prevent “historical nihilism”—is one of the primary lessons current Chinese leadership has taken from the crumbling of the Soviet Union, which Xi and his compatriots ascribe to the cadres’ break with Vladimir Lenin and Josef Stalin and general abandonment of the Soviet Communist Party’s past. This new resolution, then, with its nod to Soviet history within the telling of CCP history, is a practical mechanism for avoiding a similar fate.

More and more, the construction and utilization of historical narrative is becoming a central policy prescription in Xi’s China because forgetting history is remembered as such a destructive act in Soviet Russia. In this way, the issuing of this new resolution marks the beginning, rather than the end, of this project; As the Twentieth Party Congress approaches and Xi’s effective coronation as leader for life looms, the telling of Soviet history will only get more urgent and its lessons direr.

Christopher Vassallo is a contributing writer for The National Interest and a junior fellow of the Center for the National Interest’s China and the Pacific program. He is a former Schwarzman Scholar and researcher at the Asia Society and Harvard Belfer Center. His Twitter handle is @VassalloCMV.