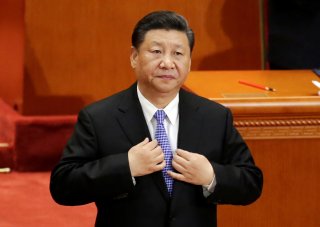 China’s astounding economic and social achievements since Deng Xiaoping have clearly challenged the prevailing world order. But President Xi Jinping’s recent moves to consolidate his hold on power may presage the self-inflicted defeat (or at least constraint) that China’s geopolitical competitors cannot even hope for, let alone devise and implement.

Xi has now accumulated more political and economic power and authority than any leader since Mao Tse-tung. The 19th Communist Party Congress last October reelected Xi as the general secretary of the party and the only contender of the post-Deng period left standing. Xi has replaced the collective leadership model and organizational limitations Deng installed to diffuse authority, to create some balance of individual and institutional power, and to preclude another cult of personality like the one Mao built, all precisely to thwart, for example, the catastrophes of the Great Leap Forward, the purges and the Cultural Revolution. In March 2018, the National People’s Congress, China’s parliament, unanimously re-elected Xi to another term as president and amended the national constitution to eliminate the two-term limit on presidential terms, another provision established by Deng to prevent indefinite rule, the personality cult and the concentration of power. Xi may now be president for life and certainly for the foreseeable future. Simultaneously, the National People’s Congress enshrined Xi Jinping’s thought (“socialism with Chinese characteristics in a new era”) in the country’s constitution alongside Chairman Mao’s thoughts. The People’s Congress re-elected Xi as chairman of the Central Military Commission, Deng’s position of power in his latter days and the primary mechanism to ensure that the military remains under party control.

Only twenty years ago, Xi was one of several “princelings” angling for power, barely elected in 1997 as an alternate member of the Party’s Central Committee—indeed the lowest of the 151 candidates. Now at the top of the heap, he has removed all competitors. He runs the party, the congress, the bureaucracy and the military. His only rival is historical: Chairman Mao himself.

President Xi has concentrated his power in other ways as well, ways that portend problems and create weaknesses well-known to authoritarian regimes. He has empowered the Central Commission for Discipline Inspection to find corruption and root it out not only proscriptively through rules and regulations but vigorously prosecuting particular officials for their past transgressions. It has launched a broad and deep anti-corruption campaign disciplining hundreds of party and military cadres, notably including Xi’s earlier rival princeling, Bo Xilai, and then Sun Zhengcal, an obvious next-generation candidate for succession to Xi. Both had been communist party chiefs in Chongqing, a launching pad for party leadership, and both were removed and tried, though not before enduring humiliating confessions reminiscent of Mao’s purges. “I sincerely plead guilty and express remorse. I have only myself to blame and deserve to be punished,” pled Sun recently before his prison sentence rather than, as widely expected, his election to the Politburo Standing Committee. Hardly unique to Xi Jinping, authoritarian officials commonly target anti-corruption campaigns through selective prosecution of their predecessors and potential successors to secure their own tenure and monopoly on power—a recipe for poor governance and, ironically, additional corruption.

Perhaps more ominously for China, Xi used the 19th Party Congress to reverse the policy trajectory of the post-Deng era. “Government, the military, society and schools, north, south, east and west—the party leads them all,” he announced. Although the economy was not mentioned explicitly, it was clearly included. And to ensure that message, Xi has pruned previous emphasis on the private sector as the engine of growth. Private enterprises, especially large ones, have been ordered to trim acquisitions and to remember their socialist responsibilities. Moreover, “invitations,” “suggestions,” even orders have been delivered to large state-owned enterprises and many private ones to purchase and incorporate smaller, weaker, indebted, inefficient and even bloated SOEs, as well as for banks to again provide them loans or forgive or discount their debts. All of this is part of Xi’s “mixed ownership reforms.” Since its creation in 2003, the Assets Supervision and Administration Commission has taken over nearly 200 governmental economic and military enterprises and amalgamated them into about 100 monopolies or oligopolies, which now account for around 40 percent of China’s industrial assets but which are so heavily indebted and so unprofitable that they constitute non-negligible systemic risks to the financial system. At the very least, the historical record is clear that SOEs don’t do well. They are a drag on, not a contributor to, the economy. They do, however, allow for greater political control.

More broadly, President Xi has reined in traditional and social media outlets. He has mandated further deployment of facial recognition technology connected to resident identity cards and the social credit system, and encouraged greater social surveillance, which is growingly ubiquitous. The Internet is now under much greater scrutiny and control. The state has clamped down on opinion of every non-hagiographic kind with particular vigor for political dissent and in areas with minority populations, like Xinjiang and Tibet. The contribution these measures make to social control is obvious and disconcerting.

But even from Xi’s perspective, China’s future, like that of all industrialized countries, lies with innovation and creativity. Future competition will be keen. And Xi’s recent efforts might not constitute Mao’s Great Leap Backward, but are certainly a step in that direction.

We have seen variations of this movie before, many times in fact, and none of the them end well. We have seen it in the Soviet Union, Central and Eastern Europe, most of sub-Saharan Africa, South America in the 70s, and Venezuela and Cuba now. It is possible that China will break with the historical record, but not very likely.

However, if you are a competitor to China worried about its Leviathanian momentum, its apparent relentless accumulation of market share, its illicit appropriation of intellectual property, its increasing presence in cyber-technology robotics and artificial intelligence, and its political/military ascendance in the South and East China Seas, this may be good news. But not if you are Chinese, let alone President Xi Jinping, with his vision of “the China dream” as the “moderately prosperous” “great modern socialist” Middle Kingdom building tributaries and dependencies far and wide.