Xi Jinping's Message to the World: China is Back 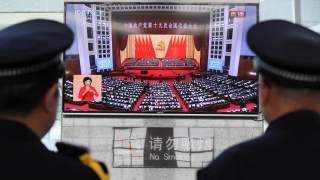 China’s 19th Party Congress, which opened this week in Beijing, is a landmark event for the world’s second-largest economy. In China’s one-party state, these congresses determine the country’s leadership, and are held every five years. But this one is special. It’s the first to be held since China’s current top leader, Xi Jinping, took power in 2012, and much has happened since then. Under Xi, the size of China’s economy has grown from 7.2 to 9.5 trillion U.S. dollars, its notorious one-child policy has been abolished, and it has rather improbably become a global leader on issues like climate change. Xi’s message to his people has been clear: these achievements have occurred under his leadership, and their loyalty is expected as he propels China to even greater heights.

But while the primary audience of the 19th Party Congress is the Chinese people, Xi’s speeches also contains a message to the world—one that Washington, Tokyo and other capitals must take seriously. The hallmark of China’s foreign policy under Xi has been the abandonment of the “lay low” doctrine followed by each of his recent predecessors, and the adoption of an aggressively expansionist approach. To be fair, China under Xi has been a largely constructive partner in global efforts to deal with issues like piracy, nuclear security and environmental protection. But actions speak louder than words, and whether its militarization of the South China Sea, the abduction of supposed criminals abroad, or covert influence campaigns in the United States, Australia and other countries, it’s clear that under Xi, China is on the march.

During the 19th Party Congress, Xi codified this aggressive foreign policy—and, more troubling, its inherent link to nationalism. In his keynote address, Xi called on his people to “make unremitting efforts to realize the great rejuvenation of the Chinese nation,” and promised that, if they do so, by 2035 they will witness the “great victory of socialism with Chinese characteristics.” The official summary of Xi’s speech, which identified nineteen key messages for the people, moreover pledged to make the “Chinese people stand proudly and tall among the peoples of the world.” While Xi and other Chinese officials have previously made similar statements, at the 19th Party Congress Xi cast them as the organizing principle around which a new era of Chinese foreign policy can be built.

Just as important, Xi identified several key elements of this new approach. The first is to continue China’s rapid military modernization. Xi made specific reference to the need to strengthen the new theater combat commands, which were set up in 2015 to improve the Chinese military’s combat effectiveness. His speech also pledged to “maintain sufficient ability to defeat any form of Taiwan independence.” More surprisingly, Xi also called for the country to enhance its soft power, including by “developing socialist art and literature.” Xi couched his aggressive messages on military expansion and Taiwan with pledges to never pursue “hegemony” on the international stage. But his overall message was clear: China’s power is here to stay on the world stage.

So how should the United States and other countries respond to Xi’s message to the world? First, Washington and its partners need to recognize that while China’s leaders may be fixated primarily with domestic matters, that doesn’t mean the world can count on a stable Chinese foreign policy. Indeed, it may mean the opposite: gambles abroad may look less risky to Xi if the alternative appears to break his pledges to advance China’s greatness on the world stage. Second, the United States and like-minded countries need to prepare for an era of multidimensional competition with China. The soft-power primacy of the West cannot be taken for granted, and China’s influence campaigns may need to be countered by reviving the lost Cold War art of ideological competition. The United States, in particular, should consider reviving the U.S. Information Agency, whose mission was to spread American values around the world.

Scott Moore formerly worked on U.S.-China relations at the State Department. He is currently a senior fellow at the University of Pennsylvania Kleinman Center for Energy Policy.

Image: Policemen watch a broadcast of Chinese President Xi Jinping delivering his speech during the opening of the 19th National Congress of the Communist Party of China, as they stand guard at a railway station in Yuncheng, Shanxi province, China October 18, 2017. REUTERS/Stringer