A Year after the Iran Nuclear Deal, the Ball's in Tehran's Court 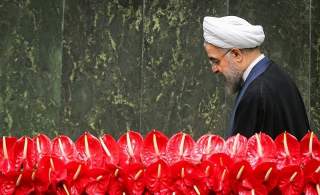 One of the foremost foreign policy challenges for the Trump administration will be defining its approach toward Iran and the JCPOA—the momentous nuclear deal—and devising a comprehensive policy in this regard, taking into account the serious flaws in the deal itself, as well as Iran’s troubling behavior following the deal’s announcement and implementation.

The impulse to scrap the deal—as Trump promised on the campaign trail—is understandable, but at this point renouncing the deal would be a lose-lose proposition. Iran has already pocketed over $100 billion in sanctions relief, and the decision would cause friction with the other P5+1 states. Iran would presumably be free to resume its program with no restrictions, because all UN Security Council Resolutions demanding suspension of uranium enrichment activities have been replaced by Resolution 2231, which endorses the JCPOA. In addition, all ills emanating from the flawed nuclear deal would thereafter be attributed to this decision rather than to the very real issues surrounding the deal and its implementation. Demanding renegotiation of the deal is also perilous. Even assuming that consensus among the P5+1 could be reached on this, which is doubtful, renegotiation would take years, and what leverage would the international powers have to work with to pressure Iran, after having lifted the sanctions?

Indeed, at this point, making the best of the bad situation that has been created with the JCPOA would counsel against both renouncement and renegotiation of the deal. However, much can be achieved simply by changing the U.S. approach to the deal and to Iran, and by altering the rhetoric. Given the strong reservations voiced by Trump and his prospective administration toward Iran, the new president should send an unequivocal message, reminding Iran that it violated the NPT by working on a military nuclear program, while warning it against any erosion of the deal and the consequences that will follow from any violation. The next step will be to work with the P5+1 to clear up ambiguities in the JCPOA—especially regarding inspections at suspicious military facilities, and looking for unknown facilities—and set clear guidelines for responding to every type of Iranian violation.

The Trump administration should press to end the secrecy surrounding many of Iran’s nuclear activities and plans, reminding all that as a known and proven NPT violator, Iran lost its confidentiality privileges. Confidentiality has led to a dangerous lack of transparency with regard to IAEA reports on Iran’s activities, as well as deliberations and decisions in the Joint Commission and within the Procurement Working Group. Exemptions that have been granted to Iran to meet certain deadlines have leaked to the media, and fuel suspicions that the JCPOA is even more problematic than what appears from the text. As Olli Heinonen has pointed out, we need to know, for example, whether Iran’s nuclear research and development plans impact JCPOA parameters for a one-year timeline to breakout. In a recent Washington Institute policy analysis that also highlights the sore lack of transparency, Bauer and Clawson lay out the full array of problems that plague the setup and workings of the Procurement Working Group. All of these issues need to be thoroughly examined by the new administration.

But the Trump administration must also carve out a more comprehensive approach to Iran, taking into account the dynamics between the United States and Iran that have unfolded over the past eighteen months since the nuclear deal was presented, and which underscore the absence of any convergence of interests between the two states. The administration should set the ground rules for interactions with Iran, and preconditions for any future relations. Discussion in Europe today of steps to normalize relations with Iran is premature and misguided; it projects weakness vis-à-vis Iran’s aggression and provocations, and lack of political will to confront Iran with determination.

Despite the expectations of the Obama administration in 2015 that the deal could have a moderating effect on Iran, and a stabilizing effect in the Middle East, the struggle between Iran and the United States continues. Iran did not become more moderate, nor is it a more cooperative international player. The JCPOA, similarly, did not promote stability in the Middle East, and Iran is hardly a stabilizing factor in the region. Quite the opposite: since the deal was announced, Iran has displayed emboldened behavior: stepping up its missile program, including testing of precision-guided missiles that can carry a nuclear payload, and possible cooperation with North Korea on ICBM capabilities; increasing its military role in fighting in Syria, in coordination with Russia, and committing barbaric crimes against the Syrian population; repeated provocations against the U.S. Navy in the Gulf; continued holding of Iranian American prisoners as bargaining chips to squeeze more money; and continued sharp anti-American rhetoric, including (false) accusations that the United States is not upholding its end of the JCPOA bargain.

The Obama administration’s unwillingness to challenge Iran on its policies and actions, and to push back—for fear that a reaction might jeopardize the deal—has resulted in a deterioration of U.S. leverage and deterrent power vis-à-vis Iran. In effect, it is Iran that has been successfully deterring the United States from reacting, by hinting that it could at any moment leave the deal. Indications are that the Trump administration will take this reality very seriously, and work to restore U.S. deterrence. Iran is not likely to be given a free ride on its ongoing provocations—regarding the terms of the deal, and in response to its regional behavior. Gen. James Mattis told Congress in his confirmation hearing that Iran is the biggest destabilizing force in the Middle East, and that the United States must have a strategy for confronting its regional hegemonic aspirations. He views the malign influence of Iran in the region on the rise, rendering Iran a growing threat.

New policies that reflect the Trump administration’s determination to pursue an uncompromising course in dealing with Iran—both on the nuclear front and with regard to its regional behavior—could in the long run help to reduce the likelihood of an Iranian breakout, and contain Iran from further destabilizing the region in its drive to realize its hegemonic ambitions. Changing the practices established by the Obama administration will most probably not go unanswered by Iran, but the new administration—preferably together with the P5+1, but alone if necessary—will have to meet the challenge and stay the course.