A Year on, Foreign Policy Restrainers Assess the Trump Administration 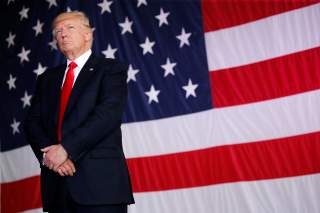 The American Conservative’s conference in Washington last week was a more somber affair than the heady gathering after Trump’s shock victory last year.

The atmosphere in George Washington University’s Jack Morton Auditorium was anything but ebullient: nearly a year after much of the leadership of The American Conservative proclaimed its hope for Donald Trump’s presidency, it was clear that a number of leading realist thinkers gathered Friday viewed the past year as a decided setback. TAC editor Robert Merry, a staunch realist and prolific author, went further than many: “There is no realism and restraint in American foreign policy in the Trump era.”

In retrospect, for this cohort, there were warning signs early on: “I shudder to think what would happen if we had a failed presidency,” said Scott McConnell, TAC founding editor, told those gathered last year. “I mean, John Bolton?” Bolton was passed over for secretary of State for Rex Tillerson, but Tillerson has, of course, had a rocky year in Washington. Bolton remains a shark in the water around Foggy Bottom, holding out hopes of replacing the former ExxonMobil chief. A former senior White House official notes that Bolton’s path to confirmation in the Senate would be challenging. In the meantime, the former UN ambassador has become a frequent White House guest this fall, and his plan for a post-Iran Deal world—which was written at the behest of Steve Bannon, as I’ve reported—continues to be looked at in administration circles.

When it came to Iran, a number of panelists complained that President Trump “doesn’t see any lessons of Iraq” in his decisionmaking. Rep. Walter Jones told the audience he wrote the president in July requesting the White House’s backing for consideration of a new Authorization for the Use of Military Force (AUMF) in the Middle East; he never heard back. Jones’ action puts him in uneasy coalition with those congressional Democrats who dream of confiscating some of Trump’s military powers.

Last year, Rep. Thomas Massie told attendees that, after Sen. Rand Paul, Trump had been one of his top choices for the GOP nomination because so much of his campaign rhetoric evinced skepticism of U.S. intervention abroad. “I think there is a spot in the Republican Party for those of us who don’t want to intervene in everyone’s business,” he said. “This is going to be our political territory, I think.” But a year later, in its closing issue of 2017, TAC said it could only find eight actual foreign-policy realists in Congress. TAC Executive Editor Kelley Vlahos floated the possibility that Trump had completely veered from the principles he laid out in his first major foreign-policy address in April 2016 at the Mayflower Hotel.

Veteran military journalist Mark Perry offered perhaps the most strident criticism of the administration, calling out “Trump’s generals”—Defense Secretary James Mattis, National Security Advisor H. R. McMaster and Chief of Staff John Kelly, who are usually widely celebrated in the press as a bulwark against the president’s perceived lack of discipline. Perry says all three are “out of their lane.”

William Ruger, vice president for research and policy at the Charles Koch Institute, was relatively more optimistic than the rest of the attendees, saying he always saw foreign-policy reform as a long-term challenge. He stressed the need to cultivate a new generation of realist professionals: “A lot of people joked, ‘If Rand Paul could even win the presidency, how would he staff out his administration in a way that was consistent with his worldview on foreign policy?’”

Absent again this year was TAC co-founder Pat Buchanan, the former Nixon and Reagan aide, pundit and presidential candidate whose ideas many say paved the way for Trump and Trumpism. He is also, relatively, more optimistic than many of Friday’s attendees, including on the troika of Mattis, Kelly and McMaster.

“Am aware of Bannon’s views on Iran, but think it best to focus on persuading Trump that fighting the next neocon war, with Iran, has nothing to do with America First but will do for his presidency what Iraq did for W, in spades,” Buchanan told me by email. “Don’t believe that Trump and his generals—with North Korea hanging fire—can be seriously contemplating a war with Iran right now.”

And in Syria, “Assad, the Syrian army, Iran, the Shia militia, Hezbollah, and the Russians won, notwithstanding Tillerson’s statement that Assad must leave. When you look at what would be required to reverse that new reality in Syria and Iraq, hard to believe that the U.S. will attempt that with a new Desert Storm,” Buchanan added. “We shall see.”

Still, for the president who was feted by many in this crowd as the heir to Buchanan, a collective assessment of where the country is a year after his election offered room for caution. These large gatherings can be instructive: who at the moment is winning the battle for Trump’s favor? So far, the jury is out.

Image: U.S. President Donald Trump stands in front of a U.S. flag while listening to U.S. first lady Melania Trump give a speech to U.S. troops at the Naval Air Station Sigonella before returning to Washington D.C. at Sigonella Air Force Base in Sigonella, Sicily, Italy, May 27, 2017REUTERS/Jonathan Ernst