Yemen on the Brink: As Houthis Rise, The State Unravels 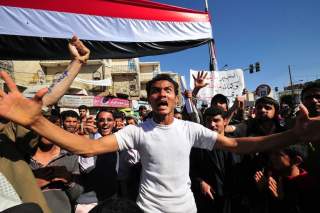 Is Yemen coming apart at the seams? This seems to be the case with the Houthis’ gradual devouring of the Yemeni state. This state meltdown is strengthening Al Qaeda could possibly bring an end to a United Yemen as the South renews calls for independence.

The confrontation between the state represented by President Abdu Mansour Hadi and rebels from the Houthi religious minority is coming to a head.

Recently, Al Houthi challenged Hadi's legitimacy by claiming that he is beholden to both foreign interests and local corruption. This escalation of rhetoric is mirrored by developments on the ground wherein the state within a state the Houthis have been building since their takeover of the capital city, Sanaa, is morphing into a full-fledging coup. Three months after storming Sanaa, the Houthis now seem to be moving to complete their takeover by seizing control of important state apparatus, including the media.

For all practical purposes, the Houthis are now the real rulers of the Yemeni state. They have a veto on every government decision. Through their “Popular Committees” and implanted overseers, they impose their will on the work of almost all ministries. They override government decisions and challenge President Hadi on key issues and appointments by blocking the work of the government unless they approve the decisions. They prevent appointed civil and military officials from taking up their posts and replace serving governors with their own supporters.

The Houthi militia is still refusing to return the weapons they looted from the army when they overran Sanaa and other parts of the country. They are using these weapons to subdue tribes and seize new territory under the guise of fighting terrorism and Al Qaeda. Yemeni officials say the group now has more weapons now than the Yemeni army itself. There were even reports that they attempted to gain control of the Yemeni “strategic missile” brigade.

The Houthis’ alleged alliance with former president Ali Abdullah Saleh, who still has support within the army, weakened the military and turned it into a hollow shell. Their attempt to incorporate their own militias into the army without government approval propelled the sponsors of the Gulf Initiative—the formula whereby 10 regional powers oversee and guarantee the Yemeni political process—to insist that this cannot happen before the Houthis return the weapons they nabbed from the army.

The Houthis are also encountering significant resistance at home. In fact, the expansion of Houthi rule in Sanaa and other areas of the country might signal the breaking point for the united Yemeni state by accelerating a confrontation with those voices in the south who are increasingly calling for “independence” or "secession.”

One place the Houthis do have support is in Tehran, as their ascension to power has significantly expanded Iran’s influence in Yemen. Iran’s relationship with the Houthis has been growing for decades, and rebel leader Hussain Al Houthi, the father of the current Houthi leader Abd AL Makak Al Houthi, has a street named after him in Tehran.

In recent years, however, Iran has been increasing its support for its Yemeni allies, providing them with ever more weapons and training.

Notably, as the Yemeni press has pointed out, this has caused the Yemeni government to change its tune when it comes toward Tehran. For example, whereas the Yemeni government had long criticized Iran’s role in the country, the foreign minister recently described Yemen’s relations with Iran as "brotherly” after the Iranian ambassador’s house in Yemen was bombed last month. More tellingly, presidential advisor and former Prime Minister Abdel Karim Al Eryani recently elaborated on Iran’s influence on the Peace and Partnership Agreement that was signed last September. Specifically, he recounted how the government negotiated with the Houthis in Sanaa over the text, and although it was accepted by the Houthis, the final answer came from Tehran via the Omani mediator in Muscat.

But the most consequential Iranian support for the Houthis comes through the transfer of weapons. Al Sharq Al Awsat reported last month that shipments of heavy weapons believed to be coming from Iran reached the Houthis through the Midi and Hudaidah ports on the Red Sea and the Al Khoukha seashore, which are under the Houthi control.

Similarly, Reuters reported last month that Iran has not only supported the Houthis with weapons, but that it is training Houthis in Iran and Lebanon, in addition to the few hundred Iranian Revolutionary Guard (IRG) personnel it sent to Yemen to train the Houthis. Nor is any of this particularly new; Iranian arms shipments to the Houthis were first reported at least two years ago, and the Yemeni press has even claimed that Hezbollah and IRGC militiamen are fighting and dying with the Houthis in Yemen.

The developing Houthi control of the Yemeni state has major strategic implications for Yemen and the region primarily because of two issues: the war with Al Qaeda and efforts by the south to regain its independence from north Yemen.

Yemeni officials are convinced that the Houthi militia’s gains have increased Al Qaeda’s ability to recruit Yemenis to their cause, and build other capabilities as well. This concern is shared by Yemen’s neighbors who believe Iran’s increased influence is prompting sectarian tensions that are swelling the ranks of Al Qaeda.

The Coordinator for the Coalition to defeat ISIL, General John Allen, agrees. In a recent talk at the Wilson Center in Washington, DC, Allen said that the regional leaders he has spoken with are concerned that Iran’s role in supporting the Houthis is alarming and polarizing the population, thereby leading some Sunni Muslims to ally themselves with Al Qaeda. These claims are bolstered by the events of the last few months, which certainly suggest an increase in both the quantity and quality of Al Qaeda attacks in Yemen.

Besides empowering Al Qaeda, Houthi control of Yemen has re-awakened dreams in the south of reestablishing the independent state in South Yemen that existed before 1990. In the south of the country, the unification of Yemen has long been perceived as a takeover by the north, and many have never been fully reconciled to it.

In fact, they have rebelled against it on numerous occasions. For example, Southerners revolted against the northern-dominated government of former president Saleh in 1994 because of its alleged oppression of them. This uprising was crushed by force. A similar incident occurred in 2007 and was again suppressed by Saleh, but this rebellion gave birth to the Hirak movement, a collection of different parties from the south united in their quest for independence.

The Southern Hirak has now been galvanized by the Houthi takeover of Sanaa. The Hirak coalition has vowed not to let them reach Aden, the capital of the south, and there is a growing view that the Houthi ascendancy provides the south with a golden opportunity to regain its independence. At a big rally held in Aden back in October, the leaders of the Hirak coalition set a November 30 deadline for all the government officials and civil servants to leave the south and go back to northern Yemen. They also called on the oil companies that work in south Yemen to immediately cease all exports of oil and to resume work only under experts appointed by the peaceful Southern revolutionary forces and to put all the proceeds in a bank account for the future Southern state.

Coalition leaders have also lobbied the United Nations and regional powers to support their independence. On November 30, thousands of southerners took to the streets of Aden to declare their support for independence. To further dramatize their point, symbolic closings of the crossings between the south and the north were imposed for a few hours. But there was no declaration of an independent Southern state as many had expected. Instead, there was speculation that disunity among the Hirak leaders, some with ties to Iran, was the reason for the failure to declare independence. But the Hirak leaders deny that they have established a timetable for declaring a state.

Meanwhile, although they are both southerners, President Hadi and his defense minister lobbied hard to prevent the declaration of a Southern state.

There are also reports that the Houthis have entered into negotiations with parties in the south to reach an agreement on a federal solution for a united Yemen of two autonomous regions, and even claim to have reached an agreement with southern leaders. But the Hirak leaders deny these reports calling them fabricated.

Southern leaders warn that if the Houthis tried to enter the South the conflict will become a “dangerous sectarian one, and Yemen will become a new Syria, or new Iraq”, as former Yemeni Prime Minister, Haidar Abu Baker Al Attas put it. He insisted that Yemen unity failed and is over, and there is a need for a new formula for Yemen. Other southern leaders are also intent on “independence” as the head of the League of the Sons of the Free Arab South, Abdul Rahman Al-Jafari—and former vice president of South Yemen—affirmed in a phone call.