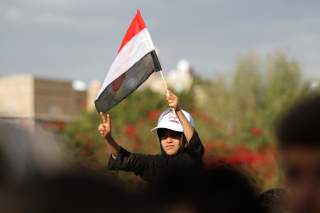 It’s rare in modern history that Congress votes to affirm a war. It’s unprecedented for legislators to vote to end one.

Early yesterday evening the United States Senate voted 54-46 in favor of S.J. Res. 7, a War Powers Resolution to withdraw U.S. forces involved in the Saudi-led intervention in Yemen. The Democratic House passed the same resolution on February 13 with a vote of 248 to 177. The resolution was originally passed by the Senate in December, but Speaker Paul Ryan refused to hold a vote while the Republicans held a majority in the House.

The Saudi-led military intervention in Yemen began in March 2015 when Yemeni president Abdrabbuh Mansur Hadi fled to Saudi Arabia after Houthi rebels captured the Yemeni capital of Sanaa. Hadi succeeded to the presidency in 2012 after the Arab Spring-pressured resignation of multi-decade President Ali Abdullah Saleh. Hadi subsequently won a presidential election where he was the only name on the ballot. The Houthis are an eponymously-named armed political movement, most of whose members are of the Zaidi sect, an off-branch of Shia Islam. Despite being founded in opposition to Saleh, the former president allied with them in their anti-Hadi rebellion before a falling out led to Saleh’s assassination in late 2017.

The original purpose of Saudi Arabia’s intervention was to restore Hadi to the presidency and combat the Houthis who they described as pawns of Iranian power. The claims of Iranian weapons shipments to the Houthis have been called into question. As reported in the New York Times, the Obama administration gave consent to the Saudi war in Yemen to “placate” them after their opposition to the Iran nuclear deal. This is despite the fact that White House officials realized at the time that the “Saudi-led offensive would be long, bloody and indecisive.”

The description proved accurate. Four years later, the Saudis have failed to disgorge the Houthis from the capital city or make significant inroads in the country. The deaths from direct violence and the Saudi bombing campaign are inconclusive but are estimated at over 50,000 people. Before the intervention, Yemen was the poorest country in the Middle East and had to import over 90 percent of its food supplies. A Saudi naval blockade along its coasts has led to a man-made famine with up to fourteen million people on the brink of starvation. The lack of nutrition and the destruction of health- and water-related infrastructure due to the bombing has led to the largest outbreak of cholera in modern history, with 10,000 new cases a week. It is the worst humanitarian crisis happening in the world.

The United States government has supported the Saudi’s military campaign with aerial targeting assistance, intelligence sharing, and mid-flight aerial refueling, along with providing it diplomatic cover at the United Nations. The resolution now passed by both houses of Congress, the first invocation of the War Powers Act since its enactment in 1973, directs the White House to end this assistance.

“When I first started lobbying for the Khanna legislation [Congressman Ro Khanna (D-CA) introduced the resolution in the House], I spoke with various members of Congress who didn’t even know there was a full-scale war in Yemen, or that Saudi Arabia was involved, and a great many had no idea the U.S. was deeply involved,” said Kate Gould, Legislative Director for the Friends Committee on National Legislation. “But in a relatively short period of time, we’ve seen a complete transformation of the debate in Congress on this issue. Members of Congress have told me they keep getting asked about Yemen when they are in town halls, and in the district.”

“This broad coalition now includes faith groups, peace and security organizations, mass-movement groups, and constitutional-rights focused organizations on all sides of the ideological spectrum,” Gould told TNI. “This tidal wave of grassroots activism has built the momentum to pull this illegal U.S. war in Yemen out from the shadows and onto the Senate floor. This war is now center stage in the national discussion about how the U.S. engages in the world.”

“Passing this resolution took a multi-year effort of exposing the catastrophic consequences of this unconstitutional war and educating the American public on the U.S. government's complicity in ongoing war crimes and enablement of mass starvation in Yemen. Hopefully, this is just the beginning of a renewed, bipartisan effort in Congress to claw back its constitutional war powers and to end its deference to the president and the Pentagon on war-making around the world,” said Kate Kizer, policy director at Win Without War, in a statement to TNI.

The Trump administration has said it will veto any such resolution passed by Congress, in what could be the first veto of Donald Trump’s presidency.

Nasser Arrabyee, a Yemeni journalist based in Sanaa and founder of the media company Yemen Alaan, believes the war powers resolution is helpful but at the end of the day only symbolic. “All the congressional efforts, including this one, helps Yemen only in one thing. Telling Americans there is a Saudi war in Yemen and reducing the effect of the Saudi lobbies, the wining and dining propaganda that keeps misleading and misinforming the decisionmakers about what's going on in Yemen. We do not expect more than this,” Arrabyee told TNI.

Gould disagrees, believing that despite the veto, Congress’ passage of the resolution will have a real impact overseas. “Today’s vote will immediately strengthen the hand of the UN Special Envoy for Yemen Martin Griffiths as he works to make the case to all sides in the Yemen peace talks that negotiations are the only way forward. The Saudi-led coalition knows they cannot continue this war on the current scale of mass slaughter without U.S. participation, and the Senate vote showcases that U.S. military support cannot continue indefinitely,” she said.

“This resolution will not have any effect more than naming and shaming the Saudis, to extort and blackmail them more. Even if passed and even if a veto is overridden, the war in Yemen is all about MBS [Saudi Crown Prince Mohammad bin Salman] wanting to be a powerful king at the expense of Yemen, with Trump saying, ‘Okay, as long as you are our man!’” Arrabyee contends. “But the Saudi dirty money that misled everyone there is always behind the delay. Who pays for lobbies more than the Saudis in United States? No one.”

President Donald Trump’s veto of the War Powers Resolution and the continuation of U.S. support for Saudi war crimes could have disastrous effects for the American public down the line in the form of increased terrorism and blowback. “For the majority of the Yemeni people, they view it as an American war on Yemen. They are sure that the Saudis would not have gone into this war without the full support of the United States. The anti-American sentiment is high and on the rise,” warned Arrabyee.