Yes, Putin Does Have a Strategy in Syria 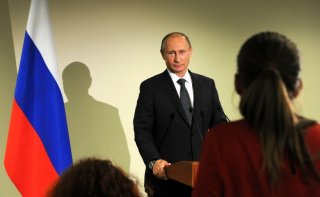 It appears that a significant portion of the Washington policy community is dismissing Russia’s Vladimir Putin either as merely a tactician, rather than a strategist, or as President Obama would have it, a fool who has injected his forces into a quagmire. Neither assertion reflects the reality that is Russia’s position in the Middle East today.

While everyone acknowledges that Putin wants to retain Russia’s presence in Syria, few realize that Moscow is in a considerably stronger position in the Middle East than the Soviet Union ever was. Certainly, Syria was not the only friend of Communist Moscow. Saddam Hussein long enjoyed a close relationship with the Soviets, who backed him to the hilt right up to the day the USSR collapsed.

On the other hand, relations with Iran were not particularly close, even after the fall of the overtly anti-Communist Shah. During the course of the Iran-Iraq War, Moscow’s support for Saddam became increasingly overt, with the Soviets eventually providing active support to Iraq until the war’s end in 1989. The Soviet Union’s relations with Egypt were even worse; Anwar Sadat had expelled 20,000 Soviet military advisors in 1972 after which Cairo allied itself firmly with the West. Finally, despite its recognition of Israel soon after it declared independence, Moscow broke off relations with the Jewish state after the 1967 War and never reestablished them during the remaining years of the USSR’s existence.

The situation is far different today. To begin with, Iran and Russia are now Bashar Assad’s primary bulwarks, both of them determined to preserve an Alawi regime, if not Assad himself. Russia maintains its cordial relations with Iraq, which are becoming increasingly stronger as Iraq continues to fall under Tehran’s influence. Russia has strengthened its ties with Egypt, both economically and in what both Putin and the government of President Abdel Fateh al-Sisi call the “fight against terrorism.” The two presidents have exchanged state visits over the past two years.

Lastly, Russia has excellent ties with the most powerful state in the Middle East, namely Israel. Moscow and Jerusalem have become increasingly close. When he was foreign minister, Avigdor Liberman was a “frequent flyer” to Moscow and continues to maintain a direct line to Putin. As with Egypt, trade between the two countries continues to increase, including trade in armaments. Indeed, Jerusalem is so sensitive to Moscow’s desires that it cut off military sales to Georgia during the 2008 Russo-Georgian conflict and has not renewed them ever since. Indeed, there seemed to be some truth to allegations that Israel had supplied data-link codes to Russia to disable Georgian drones prior to the 2008 war. Israel has also hesitated to sell drones or other arms to Ukraine, specifically as a result of Putin’s personal request to Prime Minister Benjamin Netanyahu.

All of these developments explain why Putin is in a much stronger position regarding Russia’s intervention in Syria than might otherwise have been the case. Iran and its Lebanese puppet Hezbollah are providing boots on the ground in support of Assad; Russian forces are reputedly joining them, in addition to Moscow’s air strikes against anti-Assad rebel forces. Iraq has joined with Russia and Iran in creating a coordination center in Baghdad. Egypt, for its part, has openly supported Russian intervention in Syria. As Egypt's Foreign Minister Sameh Shoukry stated just two days after Russia launched its first airstrikes against the Syrian opposition, "Russia's entrance, given its potential and capabilities, is something we see is going to have an effect on limiting terrorism in Syria and eradicating it.”

Lastly, and significantly, due to Netanyahu’s visit to Moscow prior to the first Russian air strikes, the two leaders agreed upon what Netanyahu termed a “joint mechanism” to assure de-confliction between the operations of Israeli and Russian forces. In effect, the agreement gave Moscow a free hand in Syria, while Israel would not face any Russian objections to its retaliating against Hezbollah or anti-Assad forces launched from Syrian territory.

Putin has essentially covered all his flanks in the Middle East, other than Jordan and the Gulf states, but none are likely to have any negative impact upon his pro-Assad intervention. Jordan has studiously avoided getting enmeshed in the war and has instead focused on maintaining order in the face of an influx of a million Syrian refugees. While the Gulf states are still providing funds to the Syrian opposition, they are themselves caught up in the Yemeni conflict. In particular, Saudi Arabia, the most powerful southern Gulf state, is in no position to do much about the Russian intervention. It is caught up in a quagmire of its own, in Yemen, faces an increasingly challenging fiscal crisis, and may also be wracked by dissension within the royal family.

Finally, Syria may not prove to be the “quagmire” that President Obama seems to hope it will be. Unlike Afghanistan, where the Soviets faced opposition from most Afghans, regardless of ethnic background, Putin knows that the Alawi community, which comprises some ten per cent of the population, will back him to the hilt, since its very survival may otherwise be threatened by the Syria’s majority Sunni Arabs. So too will Syria’s dwindling Christian and Druze minorities, which long were protected by the Assad family and who likewise have much to fear from both the Islamic State (IS) and the al-Nusra front that is linked to Al Qaeda. Finally, the Syrian Kurds, who have inflicted the most damage on Islamic State forces, certainly would prefer a weakened Assad to Islamist forces of any kind ruling from Damascus.

Putin has every, if not more, reason to fear the IS than does America. Russian Muslims are joining IS forces in greater numbers than those of the United States. The restive Muslim republics inside Russia are fertile ground for Islamic State expansion, which is at the heart of IS theology and policy. At some point Putin may turn his forces against them in Syria, but he first has to ensure that the Alawis remain in power elsewhere in that country.

In sum, it appears that Vladimir Putin has a far better handle on the Middle East than his American counterpart. His position is stronger than it ever was under the Soviets. Russia’s increased presence has enhanced, not diminished, its influence in the region. He is seen as standing by his allies, to the point of committing human and material resources to defend them.

With forces actively engaged in on the ground in Syria, as well as air power based there and missile that can be, and have been, launched from outside the country, he is in a position to launch an attack on the Islamic State once the preservation of an Alawi regime is assured.

In the meantime, Washington wrings its hands, issues schoolmarmish reprimands to Moscow that Russia blithely ignores, cannot even reach any sort of arrangement with the Russians that would permit creation of a viable safe zone for Syrian refugees, and has failed to develop a practical program to support the Syrian opposition. Crucially, America continues to be seen as abandoning its friends—whether looking the other way as the Shah fell, calling for the removal of Hosni Mubarak, overriding Israeli apprehension about the terms of the Iran deal, or contemplating withdrawal from Afghanistan despite President Ashraf Ghani’s pleas to the contrary—in their time of need. It is not a pretty picture. Unless there is a turnaround in American policy, whether toward reaching an understanding with Russia regarding Syria’s future governance, providing more than rhetorical reassurance to Israel that Iran will never acquire a nuclear capability, and ensuring a continuing and meaningful military presence in Afghanistan, that picture can only get worse.