Yes, Russia's Military Is Training for a 'Mega War.' That's What Militaries Do. 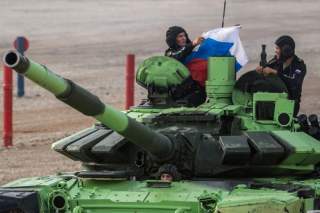 The latest series of military exercises in Russia have unnerved its Western neighbors, who are concerned that Russia may be preparing for a military campaign. The Russian military is indeed preparing for war, but that does not mean the Kremlin actually plans to initiate one anytime soon. Rather, the current and pending exercises are meant to, well, exercise the troops, for all contingencies, including worst-case scenarios, but also to send a signal to potential adversaries and “disloyal” neighbors.

These countries, of course, remember vividly how less than a month after conducting the Kavkaz-2008, or Caucasus-2008, exercises in July of that year Russian armed forces marched into South Ossetia to rout Georgia as it attempted to retake its separatist province by force. Then, in spring 2014, Russia’s military-political leadership used one of the so-called surprise selective checks of its armed forces’ combat readiness to deploy the troops needed to facilitate the taking of Crimea.

No wonder each time Moscow decides to hold a major snap check or regular drill along Russia’s western or southwestern flank, such maneuvers generate concern in some of the countries located along those borders. The latest surprise check—launched August 25 on territories comprising Russia’s Southern, Western and Central military districts—was no exception.

Russia’s Defense Ministry claims that the ongoing inspection of combat readiness of eight thousand soldiers and their equipment, including units located in Crimea and South Ossetia, is needed to ascertain whether the forces are ready for the strategic Kavkaz-2016 exercise, set to begin in mid-September. Moreover, even though the declared number of servicemen participating in the August 25-31 snap inspection is less than the nine thousand that makes military drills “subject to notification” under OSCE’s so-called Vienna Document, Russia’s MoD said it had nonetheless notified military attaches posted in Moscow about the exercise. The ministry has also invited foreign military attaches to attend Kavkaz-2016.

Russian assurances about the inspection’s goals have failed to assuage concerns in Kyiv, Brussels and Washington. Even before the latest snap check began, Ukraine’s President Petro Poroshenko expressed concerns that Russia may be planning a “full-scale invasion.” The United States has also voiced reservations: “We hope that Russia will comply with all relevant obligations and commitments under existing agreements on arms control and confidence measures to provide their neighbors with guarantees and transparency concerning the scale and nature of these activities," Pentagon representative Michelle Baldanza was quoted as saying Aug. 25, the first day of the check. Some Western media outlets chose to express their concern over Russia’s latest war-gaming in much starker terms: “Putin launches massive military operation amid fears Russia wants mega war,” screamed a headline in Britain’s Express tabloid.

As stated above, I believe the Russian military is indeed preparing for an all-out war. However, that is what generals in all countries do. It is their job to prepare for worst-case scenarios and large-scale strategic exercises are meant to test the military’s readiness for such a development. However, that does not mean that Russia’s military-political leadership necessarily wants that scenario to materialize. You do not invite foreign military attaches accredited in your capital to attend strategic drills if you want to launch another covert campaign on the scale of Crimea or a “mega-war” against NATO. Observers can, of course, be kept out of areas of covert deployments, but it would take an exceptional degree of arrogance to turn an exercise to which you have invited diplomats into an act of aggression. Nor do you announce the location and scale of drills that you mean to use to conceal preparations for war almost a year before they take place (which is the case with Caucasus-2016, announced in December 2015, giving your competitors plenty of time to train their technical and human intelligence assets onto the area—not to mention the coverage from local Twitterati.

The fact is that the Russian military has been holding strategic exercises every year since the Russian economy rebounded from the lows of the early 1990s, and it is likely to continue these—as well as the snap checks of combat readiness, which were reintroduced in 2013—for as long as it can afford them. Russian generals love to train and I cannot blame them: As one of my Harvard Kennedy School classmates observed back in 2002, half-jokingly, the U.S. military dislikes wars because that distracts them for training for them. Russian generals may hold a similar view.

These annual strategic exercises take place in different regions and their names reflect that: Zapad-2013 (West-2013), Vostok-2014 (East-2014), Tsentr-2015 (Center-2015), Kavkaz-2016 (Caucasus-2016). If anything, this rotation of locations shows that Russian strategists believe their armed forces need to be prepared for a strategic conflict from any direction, be it with NATO or China. But, again, preparing for such a conflict does not mean the Kremlin is planning to initiate one without any of the following substantive reasons (or combination of such reasons). Russia or its allies or clients would have to be attacked (as was the case in the 2008 war with Georgia) or face the ouster of a ruling regime friendly to Russia (the ongoing campaign in Syria), or Russia’s leadership would have to sense that one of its post-Soviet neighbors may “escape” to what Moscow sees as a hostile alliance (again the 2008 war with Georgia and also the 2014 conflict with Ukraine). Anyone who is trying to gauge whether Russia would resort to force should keep an eye on whether any of these preconditions emerge. Moscow has also cited massive violations of the basic rights of Russian-speaking minorities as one reason Russian forces may intervene, though so far that has been a pretext rather than a genuine cause, as Crimea has shown.

There is, of course, always room for greater transparency and Russia’s neighbors and the international community as a whole would feel more reassured if Moscow were to provide more details on all upcoming exercises, including snap checks, and grant observers access to more of them. Reviving arms control and verification in Europe with Russia’s participation and under the aegis of the OSCE, as called for recently by German foreign minister Frank-Walter Steinmeier, would be one step in the right direction. However, while helpful, greater transparency and arms control will not qualitatively diminish the chance of a conflict. That possibility will continue to loom large as long as the underlying causes of potential conflict are not addressed, such as Russia’s concerns about NATO’s expansion to the post-Soviet space. As long as that perceived threat persists, Russia will continue to have its forces trained for a major conflict in the west and southwest and will keep using these trainings to deter both post-Soviet neighbors and the West from pursuing membership in Western alliances and granting such membership respectively.

The way I propose to address Russia’s concerns vis-à-vis Western alliances and the West’s concerns vis-à-vis Russia would be for OSCE members to sign a new European security charter. This charter would address Russia’s concern by requiring any further expansion of the continent’s military alliances to get the consent of three-fourths of the signatories – a difficult hurdle to clear, by my count. The charter would also reaffirm OSCE members’ pledges to respect each other’s territorial integrity and refrain from any kind of overt or covert action to change borders in Europe and would obligate them to resolve their existing territorial disputes in peaceful ways. Such a pledge by Russia could help alleviate concerns over not only the Baltic States but also Ukraine, Georgia and Moldova, both among those states and among their Western partners. The charter would feature specific, enforceable mechanisms for managing conflicts, including warning systems to identify and defuse tensions in their early stages. More importantly, the document would entail responsibility for violators—crucial in alleviating concerns about Russia’s future behavior.

If there is currently consensus on any issue in Moscow, Brussels, Washington and Kyiv, it is that post-Cold War Europe’s security architecture is broken and needs to be repaired before it produces another deadly armed conflict like that in former Yugoslavia, Georgia and Ukraine. The proposed charter could be a good way to start repairing or even rebuilding that architecture before it is too late.