You Brexit, You Buy It 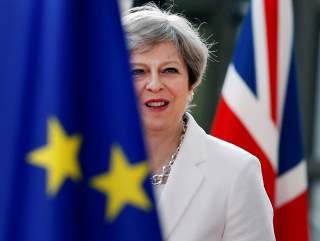 On March 28, the day before Brexit officially began, a very British row broke out—about legs. It was about women’s legs, to be more precise. Just hours before Theresa May invoked Article 50, formally triggering Britain’s withdrawal from the European Union, the Daily Mail, an anti-EU tabloid, published on its front page a picture of May, sitting next to Nicola Sturgeon, the Scottish first minister. The two women were wearing knee-length dresses. “Never mind Brexit, who won Legs-it?” barked the headline. The Mail’s mild exercise in misogyny caused a furious storm among journalists and politicians. Jeremy Corbyn, the Labour Party’s leader, declared: “This sexism must be consigned to history.” Owen Jones, the Guardian columnist, added,

it is indicative of what is happening in Brexit Britain. . . . For right-wing Brexiteers, this is a great national awakening . . . they want to turn this country into the drunk man, stumbling around yelling obscenities at everyone, leering at women and shouting racist abuse.

If only that were the case, Brexit would be much more fun. What almost nobody wanted to admit was that the Daily Mail had done the rest of the press a favor. The Legsit brouhaha provided relief from the drudgery of Brexit news. It’s much easier to be excited by sexism than it is to argue about trade tariffs, rebates and sovereign legal jurisdictions. Brexit is important—everybody knows that—but like all divorces, it is also disturbing and at times very boring.

The politics of Brexit are not dull: they are dramatic and disorienting. In Theresa May, Britain has an unpredictable leader. She is pushing ahead with a clean break from the EU ahead of all else, even though she was in favor of remaining. She also stressed, repeatedly, that she would not be calling a general election. Britain needed “a period of stability” following the political earthquake that was the vote to leave the EU, she said. Then, on April 18, she called a general election. “The country is coming together” behind her agenda, she explained, “but Westminster is not.”

Everybody thought she would storm to victory. She didn’t. Before the election on June 8, psephologists had talked about May winning the largest British parliamentary majority since the Second World War. But May proved to be an amazingly bad campaigner—grim-faced, robotic, disconnected. Though she won, just, her victory did nothing to give her the fresh mandate for Brexit she was looking for—quite the opposite. To form a majority government, she has had to enter a rather makeshift coalition with Northern Ireland’s Democratic Unionist party. Having projected herself as the “strong and stable” candidate, she now looks weak and hapless. Even the most ardent “Brexiteers” on the right are now concerned that a woman who doesn’t seem to know what she is doing is in charge of the most seismic political shift in Britain’s postwar history.

BEFORE THE election, the Tories were enjoying a strange outbreak of unity. May, a Remainer who had embraced Brexit as the will of the people, seemed to represent a new settlement within the party over a question that had long torn it apart. Labour, meanwhile, seemed hopelessly divided, especially over Europe. Its power base in rich, metropolitan London was passionately Remain, yet the Old Labour heartlands were the most pro-Brexit areas of the country. Corbyn himself appeared desperately torn. He instinctively sympathized with the 35 percent or so of his party that had voted to leave the EU, but he didn’t want his image as a lover of immigrants to be tainted by the nationalism that drove the anti-Europe vote. With his party hamstrung by Brexit, and Corbyn widely ridiculed anyway for being too far to the left of mainstream British opinion, bien-pensant opinion figured Labour for a goner. The smaller, resolutely pro-Remain parties, the Liberal Democrats and the SNP, looked destined to thrive. The Liberal Democrats could be the voice of the 48 percent who voted Remain. Meanwhile, the SNP, led by Sturgeon on her sturdy Caledonian calves, was demanding a second Scottish independence referendum—just two years after they narrowly lost the first—on the grounds that a large majority of Scots voted to stay in Europe, and therefore does not want to be part of an independent United Kingdom. Another successful general election for the SNP could have given Sturgeon the momentum she needed to break up the United Kingdom.

But the SNP had a bad election, and the Liberal Democrats experienced no great resurgence. Labour, on the other hand, defied all expectations and nearly won. Corbyn successfully parked the Brexit issue, by pledging allegiance to Brexit. He even forced his MPs to support the triggering of Article 50. But he did not talk about it much on the campaign trail. As May and others went about the country banging on about Brexit, which for all its importance is still quite opaque and intangible, Corbyn spoke to people about schools, hospitals, wages and the wicked rich—in other words, the issues voters care about. His grassroots movement prospered, and Corbynmania briefly infected much of the nation. After the election, for instance, Jeremy Corbyn was greeted with Obama-like adulation at the trendy Glastonbury music festival.

The election was in no way a repudiation of last year’s EU referendum, then, even though many Remainers are eager to portray it as such. On the contrary, four out of five voters voted for Labour and the Tories, parties that are committed to leaving the EU. But the whole subject of what Britain does next is deeply confused and nerve-wracking, and it’s fair to say the British are in something of a Brexit funk.

The rules of the game are a mystery. Nobody really knows how a country extricates itself from the European Union. The EU wasn’t set up to deal with members leaving; the whole idea of the European project, as defined under the Treaty of Rome, is to achieve “ever closer union.” Article 50, the mechanism for a member state to withdraw, was never intended to be used. Giuliano Amato, the former prime minister of Italy and a venerable Eurocrat, has claimed he only added the clause to the European Constitution as a sop to recalcitrant British politicians, because Brits have never been comfortable with the idea of pooling sovereignty with the continent. “My intention was that it should be a classic safety valve that was there, but never used,” he said. “It is like having a fire extinguisher that should never have to be used. Instead, the fire happened.”

The Brexiteers regard Article 50 more as an escape hatch on the great sinking ship that is the European Union. Neither side has much of an idea how the damn thing operates. At first, both Brexiteers and Europhiles hyped Article 50 as a “point of no return.” In the aftermath of the EU referendum on June 23, 2016, triumphant Euroskeptics urged the government to seize the moment, and invoke the clause before the Brussels bureaucrats figured out how to inveigle Britain back into the EU fold. Pro-Europeans—now called Remainers—said that it would be madness to trigger Article 50 without any clear sense of Britain’s future, “the equivalent of jumping off a cliff with an untested parachute,” as one start-up businessman put it. Then Article 50 happened, and the Brexiteers cheered. The Sun projected a vast farewell message—“DOVER & OUT”—on the famous white cliffs of Dover, which face the English Channel. Lots of Remainers changed tune, however. Never mind Article 50, they said, Brexit can still be stopped. Lord Kerr, who claims to have written Article 50, insisted the clause was not intended to be irrevocable. He said Britain could change its mind at any time during the two-year negotiating period.

Amid the confusion, it can be hard to tell who is more delusional: the Brexiteers who think an independent Britain will almost instantly be elevated to great global status again, or the Remainers and the EU officials who can’t accept that Brexit is happening.

WHAT’S INCREASINGLY clear is that there is little room for dialogue—let alone compromise—between Leavers and Remainers, or Theresa May’s government and the EU. The opening exchanges of the Brexit talks showed that while both sides are eager to sound polite, they cannot agree on the process for withdrawal, let alone the terms.

Theresa May has called for “a phased process of implementation,” meaning Britain and the EU would agree a transitional arrangement on trade, customs and immigration while a more permanent free-trade agreement (FTA) is struck. The EU, by contrast, is pushing first for the cost of a “financial settlement”—a.k.a. the Brexit Bill—to be agreed before negotiations can move forward. Jean-Claude Juncker, the EU’s endearingly eccentric president, has said Britain’s exit payment must be sufficiently “salty,” to put off other countries that might be tempted to leave the EU ship. The saline figure being touted by the other twenty-seven EU members is 60 billion euros. That may not sound obscene, considering the larger sums involved, but it is more than enough to generate strong disagreements about who owns what share of the continental silver. Article 50 contains no mention of a severance fee, the Brexiteers point out, and Britain has poured enormous amounts of money into the European project over the years. A paper by the consultants Miles Saltiel and Bob Lyddon, of the policy institute Global Britain, argued that Britain has a right to tens of billions in capital reserves from the European Investment Bank. If anything, they owe us, say the Leavers.