Your Guidebook to a Greek Financial Default 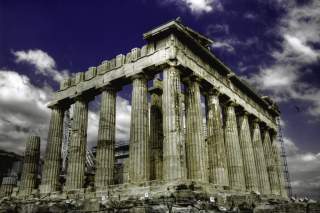 The Hellenic Republic has too much debt. So much, in fact, it is unlikely to be able to repay it all—even given more bailouts and more time. There are few viable choices, many views, and the typical convoluted European politics. The chances of something dramatic happening are rising.

It is worthwhile to review how we got here: The 2008 financial crisis exposed the Greek debt problem, yields spiked, and in an effort to maintain stability in the European Union (EU), the troika—the International Monetary Fund (IMF), the European Commission, and the European Central Bank (ECB) — bailed the Greek government out. This kept Greece in the EU, and the EU itself stable for a time. But the troika required adjustments to the Greek economy in return for its money, and this “austerity” thrust the Greek economy into a depression-like economic cycle.

The Greek people never elected the troika, and after the bailout, the troika paid little, if any, attention to the long-term effects of its austerity policies on the liberal-democratic process. Its imposition of austerity broke down the traditional democratic linkages, allowing a “debt democracy” to flourish. In defiance of the measures imposed by the troika, the Greeks elected the Syriza government to combat the austerity measures, and the extranational entity imposing them.

From here, there are only three ways this round of the Greek crisis plays out. First, Greece could receive a bailout without any sort of debt reduction, and the current scenario would be replayed in the not so distant future. Second, Greece could default, and the ECB could remove emergency funding access from its banks, thereby forcing Greece to leave the euro. And, finally, Greece could default and the ECB could act as the lender of last resort to its banking system, thereby keeping Greece in the EU and currency area (It is worth mentioning that a debt restructuring, reduction or swap would act similarly to a default). None of the options are ideal, but some are better than others.

There appears to be little chance that the first option will happen. There is no appetite for continued bailouts from the Northern European states without significant concessions, and Greece does not appear to be willing to undergo the austerity measures required to satisfy their creditors. Neither side wants to maintain the status quo.

The second option is the worst for all parties, and there is some likelihood it will happen. If Greece defaults and the ECB does decide to withhold ELA funds (emergency liquidity assistance—the mechanism the ECB uses to provide liquidity to banks in emergencies), the ECB becomes a source of volatility and instability.  Since an imminent sovereign default would be a critical time for the lender of last resort to step-in, the ECB would be setting a dangerous precedent by not coming to the aid of the Greek central bank. Of course, the threat of being cut-off from ECB lifelines may deter Greek officials from pushing the limits of their current package, but it may also cause Greeks to stop looking at the ECB as a central bank and more like a German weapon to impose and perpetuate austerity.

This means the ECB has not only been politicized, but weaponized. It can destroy an entire economy if its (Germany’s) demands are not met. And Greece is where the gun is pointed.

The ECB has complete control over emergency funds to the Greek central bank. Greece cannot be forced to leave the EU (it must leave voluntarily). But the ECB could effectively force Greece to leave by cutting the Greek banks off from ELA funding. Cutting the banks off from funding in the midst of a crisis would force the banks to close and collapse. If Greek collateral is no longer be accepted by the ECB, there is no for way for it to borrow to fund deposit redemptions.  Without a backstop, there ceases to be a viable financial system.

And this is a distinct possibility. The ECB is lending to the Greek banks who must post collateral against their borrowings. Many analysts think Greek collateral will be rendered worthless, and the banks will simply not have any creditworthy assets at their disposal in the case of a default. After all, the ECB (probably) cannot take a defaulted piece of Greek paper as collateral for perfectly good Euros. Merkel may not be able to kick Greece out singlehandedly, but she may get the ECB to do it for her.

For Greece, exiting the euro and returning to the drachma would require the banking system to overhaul deposits and print an entirely new currency. The drachma would plummet against the euro and the dollar. While this would make exports far more competitive, Greece imports more than it exports. This means that Greece would almost certainly be accepting hyperinflation and a further decline in economic output by leaving the EU (and defaulting on its debt).

Beyond Greece, there is a good chance that the use of the ECB in this manner risks the confidence of member states, and possibly leads them to second guess their willingness to be subject to the whims of a central bank not under its own control. This applies not only to existing members of the EU, but also to potential members.

Central banks are the lenders of last resort, not hall monitors and bailout overseers. If Greece is forced out of the EU, it could spark a euro scare. If Greece decides to leave, they threaten to inspire others to do so as well. The ECB must be careful to not be seen as the reason for leaving, and discourage others from leaving if the case arises.

If the ECB acts poorly, it will spill into investment markets as well. Investors like to have confidence that there is a backstop—the Fed during the Great Recession is an example. Fearing (or worse—knowing) this safety net does not exist would impair confidence, and confidence is where growth begins to come into play.

The ECB’s quantitative easing dampens the speed with which fear can to spread to other periphery or highly indebted nations. But a crisis of confidence in the ECB’s fidelity would dampen its monetary policy effectiveness. All of the Greek issues surrounding the ECB threaten confidence in the Euro currency.

A Greek default does not necessarily imply “Grexit” or an international financial catastrophe, however. The last and (probably) best option for Greece—and the EU—was laid out by Yanis Varoufakis in a 2012 blog post: Greece needs to default on its debt payments. In fact, in Varoufakis’ mind, this is the most reasonable scenario. Why? Because a Greek default does not necessitate leaving the Euro. This is critical to understanding why the Greek government maintains that default will not be a catastrophe.

If Greece defaults on its debt and remains part of the EU, the ECB will have made a conscious decision to remain the lender of last resort. There will be some spill-over effects to nearby countries as the economy declines, but not much in the grand scheme of things. It will be difficult for the government to borrow, and there will be some economic pain, but the economy will function with the backing of the ECB. It maintains the integrity of the central bank, and all while not financing the Greek government deficit.

It would seem to be a win-win. But there is a troika, and the politics could get in the way. The IMF and European Commission are probably going to balk at any of the above scenarios.

There is a high likelihood that the EU will soon witness its first national default (at best a swap or haircut)—somewhat similar to Rhode Island during the early days of the U.S. After years of planning for its potentiality, most analysts believe that the EU has managed to capitalize its banking system to the point where it would be far less violent to the economy as a whole. Consider this—Greece is the weakest link in the Euro Area, and there is an argument to be made that the Euro currency would be better off without it. But the EU must avert a crisis of confidence in its relevancy—and it starts with the ECB.