You're Fired: How Trump Can Take On DC's Entrenched Bureaucracy 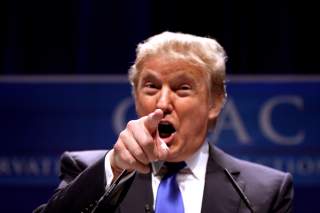 The United States government is suffering from the arrogance of the unaccountable, and if the election of Donald Trump meant anything, it’s that voters want a serious course correction.

Politico recently published an article claiming that career government employees are “panicked” by reporting on their political activities. The story hinged on a series of articles by the Conservative Review’s Jordan Schachtel, who wrote about how State Department staffers are likely unfavorable to the new administration.

According to Politico, Jacqueline Simon, policy director at the American Federation of Government Employees, said that government workers “didn’t work for Obama and don’t work for Trump.”

“This is a completely apolitical civil service,” Simon said. “Their employer is the American people.”

However, the actions of these staffers appear to be far from “apolitical.”

One staffer played a prominent role in crafting the Obama administration’s Iran policy by convincing American companies to do business with the Iranian regime and another openly attacked the new administration’s policies on social media.

These are all high-level government employees, and there is further evidence that the civil service down through the ranks is not behaving in a nonpartisan fashion. The Washington Post reported in January about how federal workers are in “regular consultation with recently departed Obama-era political appointees about what they can do to push back against the new president’s initiatives.”

This is perhaps unsurprising given the fact that 95 percent of federal government workers’ political donations to the presidential election went to Hillary Clinton, according to the Hill.

While many rightfully complain about the dysfunction of the legislative branch and want to “drain the swamp” through proposals like term limits, nothing has contributed more toward the American people’s lack of faith in their political institutions than the rise and overreach of the administrative state, the so-called “fourth branch” of government.

Bucking the Founders’ vision of limited government based on structural checks and balances, early twentieth-century progressives believed in unified power and rule by disinterested experts to carry out the democratic will of the nation. Post–New Deal, there has been little curtailment of the fourth branch’s rise—even under conservative presidents like Ronald Reagan.

The explosive growth of government and the administrative state has coincided with a slide of power away from Congress toward executive agencies, which now both create and carry out laws. But while a great deal of power has moved to the executive branch, the president has remarkably little control over the people who staff the empowered agencies.

Congress passed the Civil Service Reform Act in 1883 to curtail the “spoils system” of raw political appointments to government jobs. This law, which initially only ensured that a select subset of government employees essentially couldn’t be fired, has extended to protect the jobs of around 90 percent of nearly three million federal workers.

But politicized civil servants have found ways around these laws, and have “burrowed” into protected, lifelong employment. The spoils system never died, it just mutated and evolved to adapt to the new rules. These unaccountable holdovers can cause huge headaches for incoming administrations.

While the Founders designed our constitutional system to restrain democracy and the danger of mob rule to a large extent, they still believed that our government was ultimately accountable to the people. Under current laws, it is virtually impossible to remove civil servants from their jobs for almost any reason: even criminal activity.

While the Congressional Review Act and proposed REINS Act are important methods to give Congress greater oversight over executive agency regulations, more needs to be done to give the elected branches control over bureaucratic staff.

As I argued in my co-authored American Legislative Exchange Council paper, Trump should turn his famous phrase, “you’re fired,” into reality and propose serious civil-service reforms. Numerous states, like Georgia, have successfully moved to an “at will” system of employment for government workers and have taken serious steps to modernize their civil service.

Trump has drawn a connection between himself and Andrew Jackson, another president who used populist energy to catapult to the presidency. He would be wise to channel the best aspects of this anti-elite insurgency.

Jackson warned of office being “considered as a species of property, and government rather as a means of promoting individual interests than as an instrument created solely for the service of the people.” He believed that the occasional removal of civil servants “constitutes a leading principle in the republican creed.”

Like Jackson, Trump must take action against the entrenched interests in the administrative state and restore democratic faith in our country’s institutions. Reforming the overextend fourth branch that no longer feels accountable to the American people would be a good start.