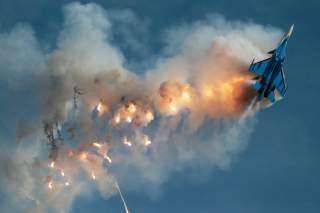 Equipped with increasingly well-coordinated command-and-control, intelligence and surveillance, joint air-ground operations, logistics and precision weapons (including strategic air platforms and long-range, air and sea-launched cruise missiles) Russia, despite some setbacks, deftly showed off its new-and-improved capabilities to a watching world. These have included a capacity to wage coalition operations with partners Syria, Iran and Hezbollah—a partnership that culminated in Syria’s bloody Grozny-style destruction of the ancient city of Aleppo, in full defiance of international law.

Although high-casualty “dumb” bombs and shells are still being heavily used in a way that ultimately may boomerang on the Russians, Syria remains the most visible application of the regime’s “New Generation Warfare,” employing a full spectrum of tactical-to-strategic nonnuclear capabilities, with assets that proudly, and loudly, carry Russia’s white, blue and red tricolor.

Especially worrisome for the world, the much-improved Russian military is now a sharpened policy tool of choice for an emboldened but strategically defensive regime that relies on preemption. A key danger is the country’s robust nuclear capability, which the Russian leadership may believe can be threatened tactically to intimidate some potential opponents into acquiescence.

Even so, Russia struggles to fully man a professional million-man standing military that competes with the nascent National Guard and robust security services for resources. Draftees still make up over a third of the force. Deploying social-media savvy draftees into questionable and extended cross-border actions is difficult. The nation is vast geographically, relatively sparse demographically, and currently hampered by high costs exacerbated by sanctions on its weak oil-based economy. Russia is also hampered by thousands of miles of inhospitable borders carved out of the hide of other nations and civilizations, as well as a small and diverse population of about 144 million citizens, most of whom are concentrated west of the Urals. Current and future Russian defense planners face a daunting challenge to create and sustain Eurasia-wide security.

To cope with manpower limits, more and more second-tier forces are being trained as well—buttressed by a growing pool of combat veterans and honed by an aggressive program of short notice “snap” and programmed readiness exercises. The Russians are increasingly taking a “whole of society” approach for their military exercises and overall defense preparedness. This includes stressing the country’s rail, road, port and aerial infrastructure, as well as its economic and banking sector. The Russian leadership seems to be psychologically and materially mobilizing their population for what some see as an inevitable war with the United States and its Allies. This does not mean the Russians want war, but it signals that the United States must do its utmost to recognize, limit and defuse Russian opportunism before it is harmful.

As Zapad “West” 2017 quickly approaches—with all its military eye candy and pyrotechnics—we must not be distracted from the long view. Developing a pragmatic dual-track policy toward the Russian Federation is paramount.

First, the United States must continuously and unambiguously underscore that it will always stoutly defend the sanctity of NATO, the core alliance of our civilization. The United States must also firmly support worldwide allies and partners while always upholding cherished U.S. principles. This is nonnegotiable and includes being ready, along with allies and partners, to respond globally to a possible worst-case scenario in which Russia invades the Baltics States or somewhere else along its long borders. Fortunately, Putin likely recognizes that it would be pure folly to commit naked aggression with his ultimately outmanned, outgunned, out-financed and “out-allied” nation. Putin and the moneyed interests of Russia know that a globally-condemned attack, even against non-NATO members, would be “bad for business” and could ultimately bring down a Russian regime that needs credible relations with the west to survive for future generations.

Instead, an emboldened Russia could choose to launch a stealth offensive by probing and non-attributable “gray zone” activities, particularly if it senses an exploitable division in NATO cohesion. More likely, such a tremendous gamble would be a preemptive reaction to what the Putin regime perceives as a serious existential threat, such as a collapse of a geographical buffer like Belarus, or suspicion that one or more foreign elements are trying to instigate regime change in Russia.

The greater risk for the world is a major accident or incident that somehow rapidly escalates into cyber-fast brinksmanship before cool heads can prevail. Such an event could happen anywhere, not just in the Baltic region or over Syria. That is where the second track of a dual-track policy is critical. Without ever condoning malign actions or acceding on sanctions, senior political and defense links between our countries need to be reinforced. We must better understand each other’s tautly stretched threat perspectives. We need to reenergize atrophied deconfliction conduits between U.S. and Russian global operational level commands, while reenergizing the withered arms control regime arms that should now include cyber constraints. Without these and other confidence-building measures that through contact seek a convergence of interests amidst today’s well-documented divergences, the dangerous trust-deficit between our two nuclear-tipped nations only increases.

The West—both NATO and the European Union—must prepare for the type of worst case, all-guns-blazing scenario that Zapad showcases every four years, but we must not stop there. It is Russia’s deceptive, stealthy and highly imaginative array of corroding, subverting, non-attributed operations that is every bit as dangerous as old-fashioned battlefield weaponry. When combined with Russia’s resurgent conventional capability, the full bag of tricks at Putin’s disposal shows a country preparing for potential conflict in ways difficult for our western societies to fathom.

Brigadier General Peter Zwack (ret.), former 2012-2014 U.S. Defense Attache to Russia, writes as the senior Russia-Eurasia Fellow within the Institute for National Security Studies at the National Defense University. These are his own views and not that of the U.S. government.