Zapad 2017: What It Reveals About the Prickly Russia-Belarus Relationship 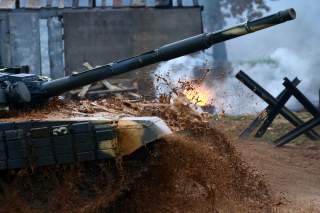 Analysts and military leaders have expressed concern that Russia is using the upcoming Zapad 2017 military exercise in Belarus as a smokescreen to put personnel and equipment in place, and keep it there, as part of a planned military escalation with the West.

Belarus, a small but proud post-Soviet nation lodged between NATO and Russia, has a long relationship with Moscow. In trying to decode Russia’s strategy in Belarus, clues can be found in the nuanced and multilayered context of the general history and nature of Belarusian-Russian relations and Belarusian national priorities.

A relatively comprehensive analysis of the dynamics between Belarus and Russia, and the strategic priorities of Belarus, suggest Russia could exceed the parameters of this exercise, but the chances of that happening are unlikely. The Kremlin has little to gain from using Zapad 2017 as a pretext to establish military presence in Belarus.

Zapad, held every four years, is one of several routine Russian exercises. Russia began conducting large annual military exercises in 1999 that rotate through Russian geographic regions based on the four points of the compass. Zapad, which begins next week, is this year’s western installment. While Zapad is the largest exercise planned for this year, it is also just one of several military exercises Moscow carried out jointly with Minsk.

Belarus continues to view Russia as its principal strategic military partner and seems likely to do so in the future. The deep ties between the two states reduce the need for Russia to use force to establish military presence. Belarus has a long history of military cooperation with Russia. While a part of the Soviet Union, Belarus hosted military facilities in its territory, including early-warning radar that provided coverage of Western Europe and a long-range naval communications transmitter. After the collapse of the Soviet Union, Russia and Belarus came to a gentlemen’s agreement—Belarus would continue to host these facilities and provide mutual defense in times of conflict if Russia would support Belarus with discounted energy prices and loans. While there are occasional quarrels, such as Alexander Lukashenko’s refusal to host a Russian air base in his country, the general understanding still holds today. Another hint the relationship endures: a recent $700 million dollar loan from Russia to Belarus.

Belarus also has sought increased economic ties with Russia and benefits from a close trade relationship with Moscow. Russia is the main Belarusian trade partner, accounting for over 45 percent of exports in the first half of 2017 and almost 60 percent of imports. Russia occasionally uses these economic ties as leverage (for example, when Russia blocked milk imports in 2009 and during energy price and supply disputes over the last decade) but Belarus still maintains and deepens these economic ties. One example: Belarus is building a nuclear power plant in cooperation with Rosatom, the Russian nuclear power company.

Cultural and social ties also link the two countries. Most Belarusians speak Russian at home even though Belarus has its own language. According to Belarusian analysts, many older Belarusians are nostalgic for the security and predictability of the Soviet era and still identify more closely with Russia than with a separate Belarusian nation. Russia and Belarus also share a common border, and Moscow treats travel to Belarus as domestic transit.

Nevertheless, Lukashenko tries to maintain a delicate balance between close cooperation with Russia and guarding Belarusian sovereignty. This policy has contributed to a growing gap between the two nations. For many years Lukashenko has pursued a multivector approach, attempting to build relations with other nations other than Russia. The Kremlin’s 2014 invasion of Crimea and military actions in Eastern Ukraine injected renewed anxiety into the Belarusian-Russian relationship. When Russia did not share its plans before the 2014 invasion of Ukraine, Minsk’s southern neighbor and a Slavic nation, created concerns in Minsk that Belarus could be next.

In 2005, Belarus and China began working together to develop a multiple-launch rocket system using a Belarusian chassis and Chinese launch system. Belarus and China also have an exchange program to educate military officers and conduct a few military exercises together each year.

Belarus reports actively fostering similar military relationships with its immediate neighbors, and Western countries, including the United States. Belarus also considers the United Kingdom, Germany, Italy and the Baltic States priority military partners. In an unprecedented move, Belarus invited observers from several international organizations to Zapad this year, a move that could discourage Russia from trying to leave equipment or troops behind.

In addition to military relationships, Minsk is cautiously emphasizing Belarusian distinctness to strengthen its national identity in the face Kremlin claims that Belarus is part of the “Russian world.” Belarus is increasing the emphasis on Belarusian as the preferred national language without taking overt steps that might isolate older generations and potentially anger Russia. There has also been greater emphasis on the wearing of traditional Belarusian clothing. These steps could, over time, reduce Belarus’ vulnerability to disproportionate Russian influence by helping Belarusians believe they are a sovereign country and that their independence is worth protecting.

As the exercise plays out, the West should consider closely monitoring it to discern how well Russian-Belarusian forces are integrated. The world should not forget that the relationship between Russia and Belarus remains close despite occasional quarrels. Even if Russia withdraws all forces from Belarus after Zapad, Belarus is still likely to treat Russia as its primary partner. Any changes in their relationship are likely to play out subtly and over time.

Bruce McClintock is an adjunct policy analyst at the nonprofit, nonpartisan RAND Corporation and a former U.S. Defense Attaché in Moscow.

Bilyana Lilly is an assistant policy researcher at RAND, a Ph.D. candidate at the Pardee RAND Graduate School and the author of Russian Foreign Policy Toward Missile Defense: Actors, Motivations, and Influence.

Image: A T-72 tank drives during the Tank Biathlon 2016 competition at the "Stalin Line" memorial near the village of Goroshki, Belarus October 22, 2016. REUTERS/Vasily Fedosenko​