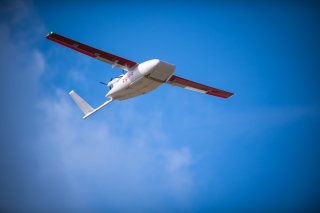 MUHANGA, RWANDA—A patient at a medical clinic in northern Rwanda needed blood. A call was made via Whatsapp. As a medical office filled an insulated box with the order, another Zipline employee assembled the drone and inserted the battery. In the control room, a third drone got air traffic clearance to launch. Four minutes later, the drone was in the air. Within minutes, doctors had what they needed to save the life of someone who would have died the year before. The Muhanga drone port can launch up to one hundred drones per day twenty-four hours per day and seven days each week. If the drones are not responding to emergencies then they’re delivering coronavirus vaccines to remote regions of the country.

Zipline is a U.S. company but it first began its operations in Rwanda because the entrepreneurs behind it identified both the need and a regulatory and corruption-free environment. It could take perhaps four hours by car to get the supplies to the rural clinic, during which time most of the blood and platelets might spoil, but such gamble or logistical difficulties are no longer issues in this small East African country. The order for an environment conducive to innovation. The operations are a small investment, but one largely offset by increasing efficiencies, reducing trucking costs, and saving lives. With success apparent, the concept spread quickly—to Nigeria, Ghana, and Japan.

Zipline has changed lives. For U.S. policymakers, it should mean more. For too long, U.S. assistance to Africa has been of limited success. Many U.S. Agency for International Development (USAID) officers or those from international non-governmental organizations like the lifestyle: Travel to “exotic” locations and living the twenty-first century equivalent of the colonial lifestyle. Too often, though, humanitarian aid worsens political stability and impedes democratic development as it changes resource dynamics. It also creates a dynamic that relieves governments from the basic responsibility to provide for their own citizens and, because of the fungibility of money, allows some governments to support militias and pursue more destabilizing policies. This, for example, explains recent political and security backsliding in Somalia. The United States has spent billions of dollars over the years across Africa with little to show for its investment.

Perhaps USAID is so set in its old ways that it cannot reform. Zipline, however, shows a different approach—encouraging U.S. businesses to invest in African countries—can do far more than handouts ever could. Zipline employees Rwandans who assemble, launch, and recover drones after just three weeks’ training. The company now operates two drone ports in Rwanda, doubling its employment and range. Encouraging new Ziplines and other start-ups trumps in impact any number of USAID workshops, construction projects, or expensive programs. Simply put, a coterie of government employees never could have envisioned such innovation or implemented such a technology; only the private sector can. That is and always has been America’s strength.

After all, capitalism has decreased extreme poverty by 80 percent since the 1980s. Even President Barack Obama observed that “free markets have created more wealth than any system in history. They have lifted billions out of poverty.” Instead of throwing money at problems as the United States has done in the past, it should encourage African countries to emulate a regulatory environment like Rwanda’s which encourages start-ups and innovation, both indigenous and foreign. With every delivery from a company like Zipline—now counting almost 150,000 commercial deliveries helping 25 million serviceable customers—the United States can win hearts and minds in a way a new Chinese stadium or Russian copper mine never can. And, as in the case of drone medical delivery, even Americans can benefit from such an investment. The company that began operations in Muhanga now operates in North Carolina, with more U.S. states likely to join the suit.