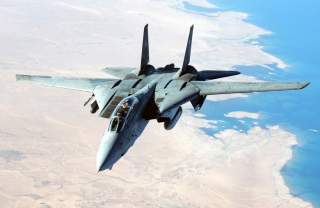 Iran, therefore, knows very well the fate that could await it and its proxies should they fall to the Islamic State. Most dangerously, the 1,500-kilometer border between Iraq and Iran is not fully controlled by Iraqi forces, who are otherwise occupied.

Here are four weapons that Iran is using to win the war against IS.

Proxy groups are by far Iran’s most effective weapons against the Islamic State because they draw on a large reservoir of manpower that amounts to sixty to seventy percent of Iraq’s population. Additionally, Iraq’s Shia population is geographically concentrated in southern Iraq, a region both contingent to Iran and home to some of Shia Islam’s holiest shrines.

The militias based there have no tactical or emotional reason to cede ground to IS and can thus be counted on as a dependable bulwark against the Islamic State’s advancement toward Iran. Furthermore, the Shia areas of Iraq provide a dependable safe haven from the violence engulfing the rest of Iraq and make a good staging ground for Iraqi soldiers and Shia militias to begin advancing into IS-controlled territory.

Iranian influence is pervasive, as it has been organizing and coordinating the various Shia groups of Iraq and has been heavily involved in the ongoing battle of Tikrit. According to Mohannad al-Ikabi, a spokesman for the Shia militias quoted in The New York Times, “Iran is the only country that is actually responding to what is happening.” Iran is reportedly providing artillery and rockets to the militias.

The head of Iran’s Quds Force, Major General Qassim Suleimani is said to be leading the 30,000 strong force moving against Tikrit, mostly made up of Shia militiamen. Suleimani flew to the Kurdish capital of Erbil last year with two planes full of military supplies in order to assist the Peshmerga in beating back an IS advance. The Peshmerga have since then begun to rely more on Iran, complaining of a lack of support from the West and Turkey.

Iran has one of the Middle East’s most advanced sets of drone aircraft, a factor that is helping it successfully fight the Islamic State.

Iran’s drones first saw combat over Iraq during the Iran-Iraq War of the 1980s. Today, Iran operates the Mohajer-4 surveillance aircraft and its cousins, which are considered examples of how Iran punches well above its technological weight when it comes to drones. According to Robert Farley, writing in The National Interest, “Iran has used drones extensively in Syria and Iraq, supplying the Iraqi and Syrian governments with recon data and identifying targets for manned airstrikes. Altogether, Iran probably has more operational experience with drones than any country other than Israel or the United States.” While Iran still has some way to go in using drones for tactical attacks, “it’s done a good job with affordable, reliable engines and airframes.”

After the fall of Mosul, Iran sent drones to Baghdad to provide watch over cities and towns near the Iraqi capital. In addition to the Mohajer-4 drones, Iran’s Abadil-3 series of unmanned drones helped conduct surveillance in Iraq. These drones are reported to have scouted out targets for bombing runs by Iranian F-4 Phantom fighters.

Iran has also reportedly developed “suicide” drones last December. These drones crash into targets kamikaze style. As state-owned Iranian media outlets reported: “The drone can be used for hitting the aerial and ground targets and can carry out an attack when it identifies a suspicious target.”

However, the Iranian Revolution and American sanctions forced Iran to modify the fighters for other purposes. During the Iran-Iraq War of the 1980s, Iran modified the fighters to “carry air-to-ground ordnance—including, in one spectacular case, a massive, 3.5-ton bomb.”

Originally, this was thought to be a purely indigenous Iranian initiative, but images of the planes reveal that they used bombing racks developed by the Americans in the mid-1980s: BRU-34s and BRU-42s. This occurred at a time when the United States was trying to improve relations with Iran.

Further modifications, however, were the result of indigenous Iranian efforts. Recent upgrades include the installation of Iranian-made radar systems on the aircraft, as well as engines and the capability to carry homemade 2,000-pound (900 kilogram) smart bombs. Iranian Air Force Lieutenant Commander for Coordination General Aziz Nasirzadeh said that this demonstrated that “we have a new generation of F-14 fighters at our service.”

Iran has used its F-14s highly effectively against Iraq in the past, and it has expressed an interest in using its F-14 fighters in the war against the Islamic State as bombers. It has already used its American-made F-4 aircraft to bomb the Islamic State in Iraq. If deployed, as is highly possible, Iran’s F-14s would wreck havoc in the Islamic State.

Several Iranian missiles, which Tehran has in abundance, are capable of destroying Islamic State targets with precision. Iran’s precision guide missile programs are fairly advanced. For example, in 2013, Iran tested its Khalij-e Fars supersonic anti-ship ballistic missile, which is precise to an impressive 8.5 meters.

In terms of missiles that can be used against the Islamic State, one of the most powerful is the Fateh-110, which has also been acquired by the Bashar al-Assad government and Hezbollah. Iran test-fired an upgraded version of the Fateh-110 short-range ballistic missile in 2012. While the missile is “meant for defense,” it is capable of destroying both land and sea targets with the same “pinpoint precision.”

Former Iranian Defense Minister Ahmad Vahidi said that the missile had a range of 300 kilometers and would be able to hit “gathering points of enemy [forces], command posts, missile sites, munitions depots, radar systems,” and others.

The applicability of the missiles against the Islamic State and other similar groups was demonstrated by the Syrian government, which used them against opposition fighters. Furthermore, according to the Islamic Revolutionary Guards Corps’ (IRGC) second in command, Brigadier General Hossein Salami, “our ballistic missiles are capable of destroying moving targets with pinpoint precision.”

If true, Iran could destroy Islamic State conveys and seriously hurt IS in the areas of logistics and supplies. Even if not true or an exaggeration, Iran’s other precision guided missiles could be deployed to seriously harm the Islamic State, which possesses nothing comparable.

In conclusion, Iran has a deadly arsenal of weapons and strategies it can deploy to seriously degrade and destroy the Islamic State. Though Iran fears an IS victory, ultimately, the Islamic State has much more to fear from Iran, which is definitely the most proactive Muslim state in the Middle East.