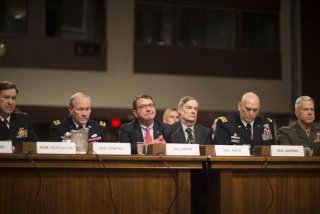 Running the congressional budget process for the first time since 2005, Republicans must navigate their divisions on military spending. The outcome thus far is militarism badly disguised as fiscal restraint.

On one side are the military hawks. Emblematic is Senator Lindsey Graham (R-SC). Graham is running for president and claims that his first act in that office would “literally” be to use the military to force Congress to give it more money (To be fair, he’s not especially serious about either). Graham recently denied the existence of tension between his fiscal prudence and advocacy of global U.S. military domination by arguing against “the idea that defense spending has anything at all to do with [debt].” This wing, especially its senatorial variety, is prone to work with hawkish Democrats to raise military spending, which, in practice means raising other domestic spending and taxes.

On the other side are budget hawks, who believe that military spending is spending. They are not anti-war, so much as anti-spending or anti-taxes, even when it comes to war. Sizeable portions of the budget committee members, especially in the House, fall in this group.

The fight kicked off when the House and Senate Budget Committees this week released budget resolutions, which set spending levels for appropriators. The House version would provide up to $94 billion for “Overseas Contingency Operations” (OCO), and non-war Pentagon spending of $499 billion for fiscal year 2016, which starts October 1. Another $24 billion of “defense” spending, most of it for nuclear weapons, falls outside the Pentagon. The Senate resolution provides the same amount for the base (non-war portion). After an amendment from Senators Graham and Kelly Ayotte (R-N.H.), it too provides $94 billion for OCO.

In analyzing the budget resolutions, keep two facts in mind. First, they’re binding just next year. Their spending plans for subsequent years occur in a dreamy future where the opposition is weaker and hard choices easier. Those wishes shouldn’t distract us from the real choices proposed for 2016. Second, the resolutions cannot change laws, like the 2011 Budget Control Act, which caps next year’s defense spending at $523 billion (the Pentagon’s share of that is about $499 billion).

With both resolutions, budget hawks failed to hold the line against military hawks. For starters, both resolutions comply with that cap, defying hawks, including the chairmen of the Armed Services committees. Budgets under the cap avoid sequestration. Remember, with the exception of 2013, when the law required sequestration because Congress could not negotiate commensurate deficit reduction, those across-the-board, meat-axe reductions occur only if budgets exceed spending caps. Congress avoided sequestration the last two years by staying under caps, albeit after raising them, by about $20 billion in 2014 and slightly this year, via the Bipartisan Budget Act of 2013.

Both resolutions prepare for the possibility of a similar deal this year by creating “reserve funds.” These allow higher spending if offsets (cuts elsewhere or revenue equaling the increase) keep the result deficit-neutral. These only matter if legislation raises the caps.

The budget committees also tried to restrain OCO spending. Price, according to aides, hoped to create an enforceable definition for what can count as OCO, but was effectively blocked from doing so by leadership and Armed Services Committee Chair Mac Thornberry (R-Tex). The result was that OCO became the way around the defense cap.

There is nothing new about expanding the definition of what counts as war spending to escape caps. That has occurred annually since the BCA took effect. Already about half of the OCO budget belongs in the base. What’s different is the scale and brazenness of the shift.

Another attempt at restraint is the House resolution’s use of a deficit-neutral reserve fund for OCO, which kicks in at $73.5 billion. Appropriators can spend up to that amount in OCO on anything, but if they want to spend more (up to $94 billion) they need to cut something to pay for it. The rationale is to put fiscal skin in the game and spark debate.

This offset requirement was the major point of contention in the budget committee vote. Fiscal hawks refused to abandon it, despite leadership pressure. But Speaker Boehner seems to have achieved an end-run around them by promising to strip it in Paul Ryan’s (R-Wis) Rules Committee.

Thus far then, hawks are winning the GOP budget fight. Still, two caveats are in order. One is that the resolutions are far from being enacted. They still have to pass the full chambers. And while the resolutions do not require presidential approval, the budgets they shape will. Things may yet fall apart.

Second, both resolutions would provide the Pentagon in total with about $613 billion for FY2016, which is just about what it’s getting in FY 2015. A bicameral GOP push for holding defense spending flat is arguably a minor accomplishment for the budget hawks, given what the neoconservative wing wants.

Still the status quo is dangerous. The compromise the GOP can, maybe, stomach is a giant off-book, debt-funded war boost for the Pentagon. The problem with that isn’t just that military spending is too high. It is also that this method of paying creates perverse incentives. If OCO becomes an auxiliary Pentagon fund that exists to escape caps, war becomes the Pentagon’s budgetary salvation. Historically, the elements of the defense establishment benefit from a public sense of insecurity, but not necessarily war. This new set-up could change that.