America's Civic Deadlock and the Politics of Crisis WHEN U.S. lawmakers returned to Washington in December 1849 for the Thirty-First Congress, they knew they faced a raucous session. As Washington’s Democratic newspaper, the Daily Union, editorialized, “A crisis in our affairs is rapidly approaching, and great events are near at hand.” But the members could not foresee the magnitude of legislative dysfunction. The crisis emerged when the House couldn’t muster a majority to elect a Speaker. Without a Speaker, the chamber couldn’t organize, and committees couldn’t meet. Without a functioning House, the Senate couldn’t do business either. President Zachary Taylor couldn’t send up his annual message and set a national agenda. Congress couldn’t appropriate money. The government froze.

By the thirteenth ballot, some suggested the chamber should abandon the majority-vote principle and allow a plurality winner. But there was no majority for that idea either. The nation was hopelessly split over a controversy widely seen as a defining national issue—whether slavery would be allowed in the southwestern territories that had been acquired through the Mexican War. Both Democrats and Whigs were split along sectional lines, and the upstart Free-Soilers—vehemently opposed to slavery extension—held the balance of power. But the stiff-necked Free-Soilers refused to put any of the major Speaker candidates over the top.

“This is a fearful state of things, and may be the beginning of sorrows for our happy country,” wrote the St. Louis Democrat in an editorial cry from the heart that was shared by millions of Americans. Soon House members were hurling political epithets at each other. Southerners threatened to leave the Union; Northerners dared them to go ahead.

The deadlock continued for three weeks and was broken, on the sixty-third ballot, only after weary lawmakers finally accepted a plurality-vote solution. “The long agony,” wrote the Union, “is over.”

But it wasn’t over. The agony was just beginning, as the slavery issue continued to roil the nation until the deadlock was finally broken, starting with the 1860 presidential election. Then came war, realignment of the party system (with those Free-Soilers now dominating the nation as Republicans), a solution to the slavery issue and an opportunity for America to once again move forward. The historical lesson is stark: when America is deadlocked over an issue widely seen on both sides as defining the nation, politics turn ugly and governmental dysfunction sets in.

We are living in such a time. Although the defining issues are less explicit and not so clearly tied to moral sensibilities, the country is deadlocked. Congress can’t function, and nobody remembers a political climate as rancorous as the current one. As U.S. Representative Paul Ryan, a Wisconsin Republican, puts it, “It is rare in American politics to arrive at a moment in which the debate revolves around the fundamental nature of American democracy and the social contract. But that is where we are.”

What’s more, a reality is seeping into the national consciousness that the political battles of our time aren’t going to just fade away. They will have to be resolved one way or another. That means we are living through a time of transition; we are living through a crisis of the Old Order. It is in large measure a crisis of conflict between entrenched powers and their constituent groups on one hand and ordinary Americans on the other. Increasingly, Americans who lack access to special favors feel the elites, and the big institutions they dominate, have hijacked the American system for their own exploitation. Whether the target is Wall Street’s big finance, Washington’s big government, big corporations throughout the country, big labor representing increasingly well-off public employees, or self-aggrandizing state and local governments, the issue is bureaucratic bigness and special favors acquired through bigness.

This sentiment is seen equally in the right-wing Tea Party movement and the left-wing Occupy movement. But the elites and their allies know how to fight back, as evidenced by Wall Street’s ability to avoid paying a price for its follies leading to the Great Recession; by public-employee unions fending off efforts to clip their wings; by the federal workforce and federal pay growing in a time of economic stagnation; and by the ongoing sway of bureaucracies throughout the land.

Thus, while the debate may be only vaguely defined, it is powerfully joined. As New York Times writer Matt Bai puts it, the new populism is no longer about struggling workers versus corporate masters, as in the industrial era. Now, he says, “It is about the individual versus the institution—not only business, but also government and large media and elite universities, too.” He should have included Wall Street and public-employee unions.

The fundamental reality of American governance is that the country’s prevailing political consensus, in force for eighty years, can’t adequately address the nation’s problems, particularly the looming financial crisis that threatens the foundation of U.S. democracy. Americans increasingly feel that the elites who pushed the country toward that crisis now are thwarting all solutions. Another harsh reality is that Americans don’t want to relinquish what government has bestowed upon them over the past half century, even though the government soon won’t be able to afford that ongoing distribution of largesse.

A CATALOUGE of elites fighting back illuminates the fault lines of today’s spasmodic politics. Consider Wall Street and the big banks, abundantly complicit in fostering the real-estate bubble that gave us the financial crisis of 2008–2009. As the financial meltdown emerged, one significant body of thought held that a true recovery couldn’t commence until the housing market could “clear,” meaning real-estate prices had to reach bottom so consumers would know that an organic recovery could begin. That didn’t happen. Instead, Wall Street elites applied political muscle to coax the federal government and the Federal Reserve into providing bailouts, stimulus packages and other financial props—all in the name of helping mortgage holders when in fact the real beneficiaries were the big banks. Thus, instead of using federal resources to remove toxic assets from the banks’ balance sheets (which would have necessitated a restructuring of the banks and upended a few lofty careers), the government used those resources to buoy bank stock prices. Arguably, this has contributed to the country’s current languid recovery.

The banks benefited additionally from the Fed’s lingering policy of near-zero interest rates. That practically guaranteed huge profits as the banks borrowed from the Fed’s discount window for next to nothing in order to buy much higher-yielding government paper (with no need to add to their reserves, as they would have had to do with big private-sector loans). Meanwhile, ordinary Americans—“the humble members of society,” as Andrew Jackson called them—saw their money-market funds and other fixed-income investments plummet. As financial consultant David Smick has suggested, this may represent “the greatest transfer of middle-class and elderly wealth to elite financial interests in the history of mankind.” It isn’t surprising that all this helped spawn the Occupy movement in cities across America; the surprise is that the protests were so mild.

In using this power to enhance their economic standing, these forces have helped push the country into a debt spiral that threatens financial disaster. As best-selling author Michael Lewis pointed out in Vanity Fair, during the boom years from 2002–2008, states increased their spending by two-thirds while their level of indebtedness almost doubled. With government pension programs getting bigger and bigger, states allowed their pension plans to get increasingly underfunded—even as they piled up other future liabilities. The result is unfunded liabilities amounting to between $1.5 trillion and $3 trillion. To compensate, states then began investing their pension funds in riskier assets. In 1980, some 23 percent of state pension money was invested in the stock market, with the rest in safer fixed-income accounts; by 2008, that number had increased to 60 percent. Further, in projecting future liability, governmental pension funds blithely assumed they could earn 8 percent on their investments at a time when interest rates were being held to near zero. The result: more and more inadequately funded pension programs. Writes Lewis: “Toss in underfunded health-care plans, a reduction in federal dollars available to the states, and the depression in tax revenues caused by a soft economy, and you were looking at multi-trillion-dollar holes” that will require massive spending cutbacks or default—or both. He quoted one expert as predicting the states will push these liabilities down to the municipal level, where default prospects are growing ominously. 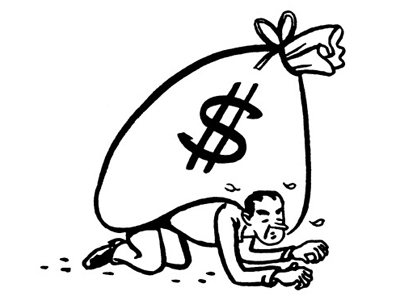 Pullquote: Many in America cling to the old days, holding fast to the status quo as if that could somehow forestall the decline of that heady postwar era when abundance was the normEssay Types: Essay