AMONG THE gifts brought by Lord Macartney, who came to Beijing in 1793 on a historic embassy intended to open China to British merchants, was a map of the world, which the Emperor Ch’ien-lung found unacceptable because the Middle Kingdom was represented on it as too small and not in the middle. As it happened, Macartney’s compatriots had already established their own cartographical supremacy. During the eighteenth century Greenwich was adopted as the prime meridian of longitude, a convention internationally ratified in 1884, and imperial maps using Mercator’s projection made Britain seem greater than it really was. Toward the end of the Second World War, American writers such as Nicholas John Spykman and Neil MacNeil urged that their country’s dominant geopolitical power should be recognized by redrawing maps of the world to put the United States at the center.

Today, the question arises with increasing urgency: Is China set to occupy pride of place in the global picture as it had famously done in the time of Marco Polo?

THE WAKING of the Asian giant, which was dormant for so long but has just overtaken Japan as the second-largest economy on the planet, is one of the most astonishing developments of the modern age. Mao Zedong’s Great Leap Forward in 1958, an attempt to collectivize agriculture which resulted in a famine that killed some 25 million people, appeared to show what might be expected from a Marxist dictatorship. Yet twenty years later, then–leader of China Deng Xiaoping initiated a “second revolution” which realized the vast potential of what was, at the time, one of the poorest and most undeveloped countries in the world.

Deng moved carefully, “crossing the river by feeling for the stones.” In an extraordinary balancing act, which Mikhail Gorbachev was quite unable to emulate in Russia, he permitted capitalist free enterprise while keeping a Communist grip on political power. The result was annual growth rates of nearly 10 percent over the next three decades. China’s share of global exports rose from 1.8 percent in 1980 to about 9 percent in 2010, usurping Germany’s top position in this league. It is projected to reach 12 percent by 2014, making the most populous country on earth the new workshop of the world.

The figures boggle the mind: The Chinese make nearly three-fifths of the world’s clothing, two-thirds of its shoes and four-fifths of its toys. China produces more cars than any other country, 13.79 million in 2009, as compared with Japan’s 7.93 million and America’s 5.7 million. Using more steel and cement than anyone else, China also has more miles of high-speed railway line. It makes nearly 70 percent of the world’s photocopiers, DVD players and microwave ovens. And it has leapfrogged the United States as the largest exporter of information technology—computers, mobile phones, digital cameras and so on. Not only have the Chinese just become the greatest consumers of energy, but they are spending billions of dollars on the creation of green technology and renewable sources of power—between 2008 and 2009 they doubled their wind-turbine capacity.

This year, according to the International Monetary Fund, China’s GDP will reach $5.36 trillion, slightly more than that of Japan. Of course, this is well below the U.S. figure of $14.79 trillion, but China’s economy is expected to overtake that of America, its largest overseas market, before 2030. Worse still for the United States, its trade deficit with the People’s Republic reached a record $268 billion in 2008. By mid-2009, China owned nearly 27 percent of America’s staggering $3.5 trillion foreign-held public debt. Thus the two nations, so alien politically and culturally, are locked together in an unprecedented, and what seems to be an inextricable, economic embrace.

How will it all end? Is it to be a spider-like clinch followed by a poisonous bite? Or is it to be a fruitful union in which each party learns to love the other? Will China attempt to translate its economic strength into military might and challenge the dominance of the world’s sole superpower? Since we can’t foresee the future, what answers does the past suggest? Not straight answers, unfortunately, for Clio, the muse of history and the only guide we’ve got, is about as lucid as the Delphic oracle.

Certainly there is evidence to show that rising commercial states often distill their wealth into power, arming themselves in order to contest for ascendancy. This was the theory formulated by Thucydides to explain the Peloponnesian War: commerce and navigation produced an accumulation of resources which was the foundation of the Athenian empire, whose aggressive stance provoked Spartan resistance. Similarly, Britain used its financial, commercial, naval and industrial muscle to acquire an empire which grew to be seven times larger than that of Rome at its zenith. Thanks to its culture, trade and technology, China itself dominated Asia for two millennia, claiming to be “the only civilization under heaven.”

For all China’s exalted pretensions those centuries ago, its amour propre was comprehensively assaulted during more than a hundred years of humiliation at outside hands. It is a period etched in acid on the pages of Chinese student textbooks today and one in which the sleeping giant undoubtedly enjoyed sweet dreams of vengeance against the fan qui, “foreign devils.” Will Beijing now try to realize those dreams? Or will its fate at the hands of outsiders direct it toward paths of peace? The prologue to China’s traumatic loss of national face can be found in the first modern encounter between East and West.

WHEN MACARTNEY arrived on his doomed eighteenth-century mission, the Celestial Emperor held sway over a realm stretching from the Caspian Sea to the Ryukyu Islands, from Lake Baikal to the Gulfs of Bengal and Siam. Aliens were deemed barbarians who, in the British case, looked like demons, stank like corpses and probably had webbed feet, and whose homeland could be brought to a constipated standstill by Canton’s refusal to sell it rhubarb. The British envoy was represented as bearing tribute to the Son of Heaven, and his refusal to kowtow was put down to outlandish ignorance. The Chinese were shocked that he could mention his sovereign, whom they regarded as one of Europe’s royal train of “puny hobgoblins or petty monsters,” in the same breath as their godhead. Ch’ien-lung himself addressed King George III as a subject and told him that his own sublimely self-sufficient empire had no use for English goods of any kind.

The Qing dynasty had been in power for nearly 150 years by this point. Yet over the course of the next century, Chinese rule would be slowly eviscerated at the hands of outsiders. The process started when it turned out that the Chinese actually did need something that foreigners could supply: they had an insatiable craving for opium. This was produced in British India and smuggled in increasing quantities into China—a trade in which Americans, or “flowery flag devils,” were also heavily involved. By the 1830s, forty years after Ch’ien-lung’s pronouncement, two emperors later and three centuries since opium first made its way into Chinese ports, it was estimated that over 2 million Chinese had become addicts. The then–Qing Emperor Daoguang feared that the narcotic was impoverishing his nation and demoralizing his people—sections of the army were too stupefied to fight. However, his efforts to suppress the drug traffic brought him into conflict with Lord Palmerston, British foreign secretary and champion of free trade and gunboat diplomacy.

The resulting First Opium War (1839–42) demonstrated the hopeless inferiority of Chinese military power, which relied on magic charms, gruesome masks, bows and arrows, ancient matchlocks and monkeys with firecrackers strapped to their backs which were supposed, when hurled aboard British ships, to explode their powder magazines. Harsh peace terms were imposed by the earliest of what China later called the “unequal treaties.” The British acquired Hong Kong as well as sharing, with Europeans and Americans, commercial and other privileges in five ports, including Canton and Shanghai. This meant, in essence, that the foreign devils could, with near impunity, peddle their narcotics wherever and whenever they wished. Liberal opinion in the West was outraged by this flagrant drug deal; Chinese hatred of outsiders burned evermore brightly.

CHINA ITSELF was destabilized by the episode, particularly as the British toyed with the idea of turning the entire country into a second India—the project was finally dismissed as too expensive, but this did not preclude powers such as France and Japan from gnawing at the Middle Kingdom’s extremities. Moreover, British and American entrepreneurs took advantage of the “open door” to develop the business of transporting coolies (manual laborers from Asia) to work overseas on plantations, mines and the like, an undertaking which bore a marked resemblance to the slave trade. The treaty ports became microcolonies, with Chinese and dogs excluded from their parks. Young Westerners sent to work in the Orient were instructed to keep the Sabbath . . . and anything else they could lay their hands on.

Many Chinese lost faith in the Qing dynasty, which was one reason for a series of devastating upheavals. The worst of these was the Taiping Rebellion (1850–64), which was led by a Chinese Christian convert and killed more people than did the First World War. The ossified imperial court—which was, incidentally, made up of ethnically Manchu Chinese, as good as foreigners to the largely Han population—seemed incapable of defeating the Taipings and equally incompetent when it came to dealing with other disasters that afflicted the realm: flood, famine, plague, vicious landlordism, incipient bankruptcy and a corrupt mandarinate. 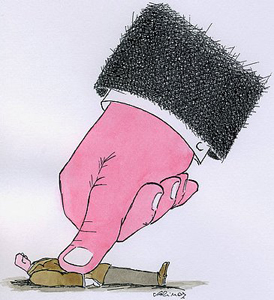