Chinese Nationalism and Its Discontents

AT NO time since the end of the Cold War have U.S.-China relations been worse. Yes, in the past there have been periodic confrontations over Taiwan, and tensions over the American bombing of the Chinese embassy in Belgrade and the Chinese fighter-jet collision with an American reconnaissance plane over the South China Sea. But the current downturn reflects a potential long-term trend with the likelihood of protracted strategic conflict. Equally troubling, this raising of tensions is not only unnecessary but also potentially costly to the United States.

Beginning in early 2009, China committed a series of diplomatic blunders that ultimately elicited a near-universal condemnation of Chinese diplomacy. The list is long:

- Beijing’s heavy-handed resistance to negotiation at the December 2009 United Nations Climate Change Conference in Copenhagen, causing diplomatic friction between China and Europe and between China and the United States;

- Its hard-line response to the January 2010 U.S. decision to sell arms to Taiwan, which included a threat to impose sanctions on U.S. companies that have defense cooperation with Taipei;

- Excessive hostility to the Japanese detention, in September 2010, of the captain of a Chinese fishing boat for operating in Japanese-claimed waters and for steering his ship into a Japanese coast-guard vessel;

- The Chinese government’s clumsy campaign to compel Google to cease service of its search engine on the mainland;

- Its December 2010 harsh and persistent opposition to Liu Xiaobo’s selection as the Nobel Peace Prize recipient;

- Increasingly forceful assertion of its disputed economic and territorial claims in the South China Sea, eliciting apprehension throughout Southeast Asia.

In contrast to three decades of a successful peaceful-rise strategy that enabled Beijing to develop cooperative interactions with nearly every country in the world, within two years China had managed to sour relations with virtually every Asian country and every advanced industrial nation.

The source of all this strident Chinese diplomacy is not its emergence as a regional great power with corresponding confidence in its new capabilities. Rather, China’s new diplomacy reflects the regime’s spiraling domestic confidence and its increasing dependence on nationalism for domestic stability. Washington has misread the state of affairs, exaggerating Chinese capabilities and fundamentally misinterpreting the source of all the aggressive Chinese diplomacy.

THE TRUTH is China is neither particularly militarily strong nor particularly domestically stable. Beijing’s combative diplomacy was not spurred by American economic weakness in the wake of the recession, and it was far from an indicator of growing Chinese confidence. On the contrary, in recent years Beijing has not deployed and operationalized significant new advanced naval capabilities, and its domestic economic environment is worse today than at any time since the onset of the post-Mao economic reforms in 1978.

Beyond its coastal waters, China’s naval capability remains dependent on its advanced diesel submarines, which were first deployed in the mid-1990s. By 2000, China’s submarine force had already begun to pose a formidable challenge to U.S. naval operations in the western Pacific Ocean. But since then it has not deployed any additional naval capabilities that pose consequential new challenges to the U.S. Navy or to America’s defense of its security partners. China still cannot independently manufacture advanced military aircraft, and it has yet to deploy a single Chinese-designed advanced aircraft. The J-15 and J-20 fighter planes are still in development. It has finally launched its first aircraft carrier, but it does not have aircraft for the carrier. Its antipiracy naval operations off the coast of Somalia are basic. Its protection of its claims in the South China Sea depends on coast-guard ships. China is developing potentially effective advanced-technology maritime access-denial capabilities, including an improved missile capability, but none of it has yet been adequately tested, much less deployed. Its antiship ballistic-missile program is not operational. China’s space program is making great progress, but the People’s Liberation Army (PLA) hasn’t developed the capacity to significantly challenge U.S. space-based communication capabilities or hasn’t built its own space-based war-fighting capability. The PLA is developing drones and air-based radar systems, but again these and other such defense projects remain relatively primitive or experimental. China will continue to modernize its military capabilities, and it will eventually deploy advanced systems that may challenge U.S. security and regional stability, but Beijing’s new diplomacy cannot be explained by thirty years of defense spending and military modernization.

Nor does the strident diplomacy reflect Chinese economic confidence. At the height of the global financial crisis, the Chinese economy continued to grow at approximately 10 percent per year. But beneath this facade of prosperity, China’s economy was weakening significantly. In October 2008, as the global recession deepened, Chinese leaders unleashed a massive but dysfunctional stimulus program. Not only did it fail to resolve most of the deep-seated problems in the system, it also managed to foster many new ones. Despite the stimulus, unemployment in China remains high in rural areas and among urban college graduates. In 2010, Premier Wen Jiabao estimated that there were 200 million unemployed Chinese. Moreover, during the past two years, inequality—by international standards—has become extremely high. As a result of the stimulus, inflation has soared, affecting the price of food, housing and transportation. By last year, China’s property bubble had significantly worsened, the condition of national banks had deteriorated more than at any time in the past ten years and local government debt had skyrocketed. Economic growth has increasingly relied on government-stimulated investment, not on consumption—which fuels even-greater inflation. More worrying still, the state-owned sector is expanding at the expense of the private sector, thus undermining innovation while politicizing economic policy making. These are all protracted problems which together suggest that social instability in China will grow and that the Chinese Communist Party’s economic-based legitimacy will significantly erode.

Beijing’s problems are only exacerbated by the fact that the tools of Chinese repression are deteriorating. In the past five years, the number of spontaneous small- and large-scale demonstrations has mushroomed. More recently, the Internet has undermined the government’s ability to control information—and to minimize nationwide hostility toward the party. It has become an effective device for people to communicate their ire over unemployment and inflation, as well as over political and economic corruption, police brutality, criminal cover-ups, environmental degradation and property seizures. In addition, peer-to-peer microblogging (via Twitter and its Chinese equivalents) can facilitate large-scale, independent and impromptu mass protests. China made its first arrest for a microblog post back in September 2010 during the rallies against Japan’s detention of the Chinese fisherman. Economic instability and the erosion of the Communist Party’s control over society are occurring simultaneously. This domestic weakness has forced the government to rely more and more on nationalism for regime legitimacy—and it explains Beijing’s diplomatic blundering.

As the Chinese people witness their relative position in the world increasing (particularly in light of the decline of Japan), the United States is seen as the obstacle to China’s international acceptance as a great power, so that Washington is gradually replacing Tokyo as the focus of nationalist resentment. With its influence waning, the party is now more vulnerable to growing strident nationalist opposition. Since January 2010, on the web and in newspapers, nationalists have demanded Chinese international assertiveness before the government can even consider a policy, putting Chinese leaders on the defensive. Indeed, in recent years nationalism has become more widespread in urban areas, infecting not just the military and disaffected youth but also workers, intellectuals, civilian leaders and businesspeople. Moreover, Internet communication technologies enable Chinese nationalists to interact with each other and can facilitate popular protests against Chinese foreign policy, thus magnifying the importance of nationalism and the danger it poses to regime stability. China’s insecure rulers, preoccupied with domestic stability, are thus compelled to pay evermore attention to nationalist triumphalism as they formulate foreign policy.

For the first time since the death of Mao Tse-tung, Chinese leaders have had to choose between using nationalism and strident diplomacy to accommodate their domestic audience and using China’s peaceful-rise strategy to accommodate the international community. Until recently, China opted for the latter. But since 2009 the party’s effort to appease China’s nationalists has resulted in a bumbling foreign policy that has aroused global animosity and undermined China’s security.

THIS NATIONALIST diplomacy bred considerable anxiety among America’s allies in East Asia. Did Washington have the will to sustain its strategic presence and balance China’s rise? A robust U.S. diplomatic response was in order. But the United States went too far, challenging China’s security on its continental periphery, creating the potential for protracted great-power security conflict and heightened regional instability.

Following the North Korean sinking of the South Korean naval ship Cheonan in March 2010 and China’s failure to publicly condemn Pyongyang for the attack, the United States developed a series of effective initiatives in maritime East Asia designed to reaffirm its resolve to contend with the rise of China. Many of these initiatives were necessary and constructive. In late June, for the first time since the end of the Cold War, three U.S. nuclear-powered submarines surfaced simultaneously in Asian ports. In July 2010, during former secretary of defense Robert Gates’s visit to Jakarta, the United States agreed to expand military cooperation with Indonesia. In November, during Secretary of State Hillary Clinton’s trip to New Zealand, the United States agreed to reestablish full military cooperation with the Pacific island nation, despite New Zealand’s ban on visits by nuclear-powered ships to its ports. The United States expanded military relations with the Philippines and strengthened its commitment to the protection of Japan. During Sino-Japanese tension over the fishing-boat-captain incident, Hillary Clinton stated that the U.S.-Japan defense treaty covered military contingencies involving the disputed Senkaku Islands administered by Japan but also claimed by China. Subsequent to the release of the captain, Washington and Tokyo carried out their largest-ever joint naval exercise. Here then was a strong America reassuring its allies—this may have encroached on China’s grand ambitions, but it was an expected and appropriate response. 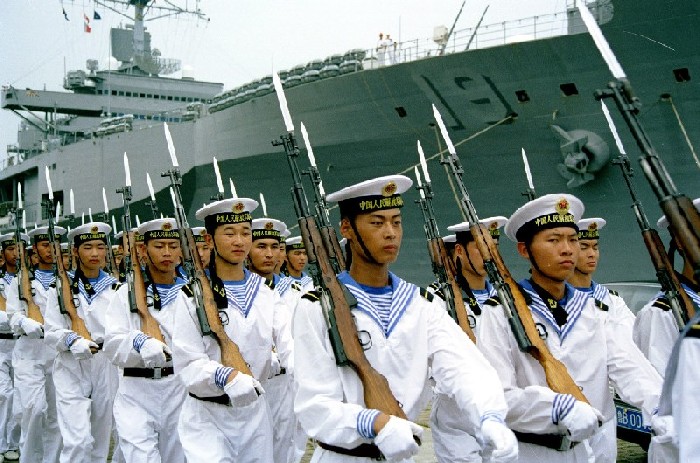