ACCORDING TO the Congressional Research Service, trade between the United States and Latin America grew an astounding 82 percent between 1998 and 2009, surpassing the growth rates of U.S. commerce with Asia or Europe. In 2011 alone, U.S. exports to and imports from Latin America increased by more than 20 percent. Every year, the United States imports more crude oil from Mexico and Venezuela than from the entire Persian Gulf. As one Obama administration official puts it, “We do three times more business with Latin America than with China and twice as much business with Colombia [as] with Russia.”

The United States also shares with Latin America an interest in cementing and protecting democratic values, as well as a set of common problems—including deadly transnational criminal threats and the mutual need to harness tomorrow’s energy resources.

Cultural and human ties are profound and growing: Latinos make up 15 percent of the U.S. population, and the United States is now the second-largest Spanish-speaking country in the world after Mexico.

Yet given the scale of these bonds, the degree of high-level U.S. strategic thinking about the region remains disproportionately low. The result is that Latin America and the Caribbean, with a population of roughly six hundred million and a GDP of more than $5.6 trillion, continue to represent a missed U.S. opportunity, economically, politically and diplomatically.

There are exceptions. Larger countries—Mexico, Brazil, Colombia—do get time and resources. Occasionally, the United States seeks (but does not always secure) Latin America’s collaboration at the un or when natural disasters hit the region’s weak states. But for the last two decades, U.S. domestic politics have too often driven Washington’s Latin America agenda—whether on issues of trade, immigration, drugs, guns or that perennial political albatross, Cuba, long driven by the supposedly crucial “Cuban vote” in Florida. As painfully, a host of Cold War legacy issues and actors still deplete the energy from Washington’s already anemic Latin America policy debate.

In his first term, President Obama rarely overcame these dynamics. Defending his administration’s record, senior officials unfurl a long list of dialogues, partnerships and initiatives. They cite Secretary of State Hillary Clinton’s travel—the most of any secretary of state in history. Early on, Clinton responded to congressional Democrats who recommended face time and a posture of listening, not lecturing. Her speeches in and about the region have put forth thoughtful ideas about social inclusion, gender, education and energy independence.

Likewise, after a century in which echoes of the Monroe Doctrine and a lingering ethos of the “white man’s burden” dominated Washington’s posture toward Latin America, Obama sought to bury the hatchet of asymmetrical power and the resentments it engendered. He appeared at a couple of summits, shook the hand of Venezuela’s president, Hugo Chávez, and visited several countries.

Yet in urging regional leaders to “deal with the future” and not “debate the past,” as he did in 2009, Obama has at times undervalued the importance of actually acting to address long-standing grievances. Ultimately, a U.S. Latin American strategy tailored to geopolitical realities in the region and poised to take greater advantage of its many economic opportunities will require real work, not just listening tours.

OBAMA ENTERED office amid sharpened anti-American skepticism across the world, even among America’s closest allies. Latin America was no exception. By 2009, two George W. Bush terms colored by torture, extraordinary rendition, Abu Ghraib, Guantánamo, counterinsurgency and a dismissive attitude toward multilateral institutions had reinforced long-held perceptions about American power. In the eyes of many Latin Americans, the Bush years had expanded to the global stage the kind of policies they had long experienced. A hostile climate for immigrants to the United States, particularly the undocumented, in a country grappling with the complex and emotional issue of illegal immigration, compounded the mistrust.

Bush’s tenure in Latin America concentrated largely on the drug war (based on funding) and on opening markets for American businesses (measured by the political capital and time spent negotiating free trade agreements with Central America, the Dominican Republic and Colombia). The president also seemed fixated in his first term on left-wing regional leaders such as Fidel Castro in Cuba, Venezuela’s Chávez and Haiti’s Jean-Bertrand Aristide. In Bush’s second term, however, he appeared to recognize the Left as a permanent feature of Latin American politics. Yet in the interim—with the United States preoccupied elsewhere in the world—Latin America moved beyond its historic deference to American foreign-policy priorities. And, notwithstanding the so-called pink tide of left-leaning governments elected to power in the region in recent years, Latin America largely embraced sound macroeconomic policies, diversifying its trade and investment portfolios to include Europe, India and China, while also moving to build new regional institutions that excluded the United States. With some big exceptions—namely, American drug consumption and lax gun laws, which have fueled transnational criminal networks in the region—Latin American leaders generally no longer saw the United States as the sole cause of or solution to their problems.

Obama’s election in itself raised America’s standing in the region. Just three months after his inauguration, the new president strode into the 2009 Fifth Summit of the Americas in Trinidad and Tobago hoping to ride this wave of goodwill and, in the process, frame a regional policy agenda for his presidency. Proposals related to citizen security, counternarcotics, microfinance, economic recovery (including a recapitalization of the Inter-American Development Bank) and energy (the so-called Energy and Climate Partnership of the Americas) offered a substantial menu of pragmatic initiatives. And even if Obama lacked patience for the depth of Latin America’s historic grievances against the United States, he hit a note of conciliation by acknowledging U.S. responsibility for past impositions and identifying U.S. demand for narcotics as a root cause of drug violence.

In the lead-up to the summit, however, political opinion in the region leapfrogged over energy, the global financial crisis and poverty, focusing instead on America’s relations with Cuba. Fidel Castro’s 2006 illness and his brother Raúl’s subsequent formal assumption of power in 2008 unified Latin American opinion around the idea of a soft landing on the island. Regional assessments of Cuba’s actuarial tables, coupled with the political coming-of-age of numerous Latin American leaders for whom Cuba remained charged with personal history, made the half century of America’s embargo and regime-change policies a litmus test for Obama.

In symbolic terms, many countries throughout the region regarded Washington’s relentless hostility toward Havana as a living vestige of the imperialism they had experienced prior to and during the Cold War. Strategically, the United States had lost considerable standing in countries now governed by the Left and whose leaders at times used Washington’s anti-Cuba policies as fodder for their own domestic agendas. Washington’s Cuba fixation also played poorly among the larger regional powerhouses: Brazil, Mexico, Chile, Argentina and Colombia. The embargo, they argued, would only impede the reform process then under way in Havana by strengthening hard-liners at the very moment Raúl Castro had signaled some readiness to pursue a more open society.

In Trinidad and Tobago, Obama and Clinton acknowledged U.S. policy toward Cuba had failed and offered to write a new chapter in the history of the two countries. Just prior to the summit, Obama repealed some Bush-era restrictions, allowing Cuban Americans with families in Cuba unfettered travel and remittance transfers to the island. (Later, in December 2010, he would also reinstate, in a more limited way, a Clinton-era policy that granted so-called people-to-people travel licenses to non–Cuban Americans.) But for the leaders gathered in Port-of-Spain, these measures proved too limited to change the subject. As a result, Obama and Clinton still got an earful from their regional peers.

Nonetheless, the president and his deputies signaled their readiness for partnership rather than paternalism by sitting in the room, listening to the rainbow coalition of mostly next-generation leaders, and hitting the right notes on social inclusion and shared prosperity. More intangibly, Obama’s personal story and youth gave his counterparts a sense that they would be able to find common ground with this president. Thus, despite their skepticism over Cuba, the region’s leaders generally accorded Obama an assumption of good faith.

A few months later, the Organization of American States (OAS) General Assembly, meeting in Honduras, afforded Washington the chance to put some meat on the bone of its declared intention to address the Cuba impasse. Almost fifty years earlier, the OAS had voted to suspend Cuba’s membership at Washington’s insistence. Now Washington signaled its readiness to discuss other members’ demands that Cuba be brought back to the collective table. Leery of the OAS as an institution weakened by Washington’s historic dominance, Cuba played coy in public during the backroom negotiations, insisting it had no interest in a return. Behind the scenes, however, OAS secretary general José Miguel Insulza and Brazil’s then president Luiz Inácio Lula da Silva helped broker a deal that resulted in a unanimous vote to lift Cuba’s suspension. But the deal was predicated on Cuba’s request for inclusion and on its compliance with democratic values enshrined in the 2001 Inter-American Democratic Charter. Though critics in Congress threatened unsuccessfully to cut off U.S. funding for the OAS in retaliation, both the administration and the media heralded the new consensus as a forward-looking diplomatic advance. Without giving ground on democracy, this confection gained regional points for Washington and gave Cuba a diplomatic win it could plausibly deny having actually sought. 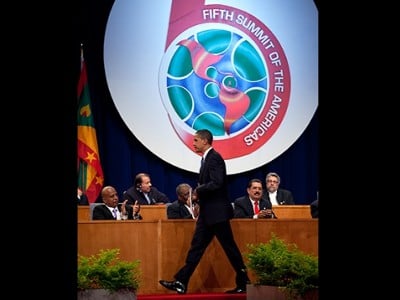