IN MARCH 2001, the once youthful but now veteran Tory politician William Hague gave a speech at a Conservative Party conference in which he banged the anti-European drum. In March 2003, he gave another speech, in Parliament, in which he warmly endorsed Tony Blair’s support for the American invasion of Iraq. In July 2010, he spoke once more, this time in the celebrated Locarno Room at the Foreign Office. But his tune had changed: like Prime Minister David Cameron, now–Foreign Secretary Hague has intimated that he seeks to distance Britain from reflexive support for Washington, and he says that, in a new multipolar world, he wants to move more generally from an obsession with the “blocs”—the United States, Europe and the Middle East—to forge fresh links with such emerging powerhouses as India, China and Brazil.

What a difference a few years make! Not only has Hague’s career turned out in ways he did not foresee, and certainly didn’t intend, the world has quite tilted on its axis. Few things have been more affected by those changes than British foreign policy, in particular the connection with the United States, often called the “special relationship,” whether the phrase is apt, or even has any meaning. After many vicissitudes, this relationship reached an apotheosis of sorts when Tony Blair took a largely unwilling country into the Iraq War, for a variety of motives, but above all because of a belief that he ought to support the United States in all its actions. Although Blair didn’t quite say “their country, right or wrong,” that was the clear implication of his position—and Hague’s at that time.

It may have been the implication of the British position for more than half a century. And that supposed special relationship increasingly looks like the grande illusion of British foreign policy, logically false and founded on a complete misunderstanding: a relationship which was special mainly in that only one side knew it existed. By now even Hague seems to understand this.

Having become an MP in 1989 while still in his twenties, Hague served briefly as a junior minister and then a cabinet minister in the dying days of the last Tory government under John Major. When the Tories were routed by Tony Blair and his New Labour Party in the 1997 general election, Major resigned immediately as party leader and Hague was elected in his place. His task was thankless, as Blair rode the high crest of a wave of popularity which many British people now look back on with a collective blush. Hague’s response was to move the party to the Right, with a renewed Euroskepticism, as it is called, though the honorable word “skeptic” doesn’t deserve to be appropriated for sour and sterile hostility to the European Union. “Talk about Europe and they call you extreme,” Hague said sarcastically in that 2001 speech. “Talk about tax and they call you greedy. Talk about crime and they call you reactionary. Talk about asylum and they call you racist.” Well yes, and there was an unmistakable streak of demagogic xenophobia bordering on bigotry running through the Tory party at that time.

What’s more, it didn’t work. Shortly after those words were spoken, the Tories were led by Hague into another election, and were again heavily defeated. Hague not only resigned the leadership but departed from front-bench politics for the time being to devote himself to making money and writing books, both of which he did to some effect. He’s an able man—an Oxford “First,” like Cameron—and his biographies of William Pitt the Younger, prime minister at the end of the eighteenth century, and the English abolitionist William Wilberforce are worth reading.

It was thus as a backbencher that Hague spoke on March 18, 2003, in support of the invasion of Iraq; his speech now seems a period piece. “Munich” has been used to justify every military intervention from Suez to Vietnam to Iraq, and Hague seemed to acknowledge the danger of this when he agreed that “analogies with the 30s can be taken too far,” but then spoiled it by saying that “in some of the opposition to the Government’s stance there is a hint of appeasement.” More than that, Hague’s case was that it was “part of our national interest to act in concert with the United States of America in matters of world peace and stability.”

Seven years later, those are words which any British politician would hesitate to utter. The consequence of such acting in concert has not been a success. British troops withdrew from Basra in southern Iraq in late 2007, with little to celebrate and with much American acrimony. This July it was announced that the British would pull out of the Sangin area of Helmand Province in southern Afghanistan by the end of the year, again with little to celebrate, and Cameron has said that he wants all our troops home by 2015 at the latest, which as it happens may be the date of the next election.

Most Tory MPs, Cameron and Hague among them, voted for the invasion of Iraq in March 2003, along with a majority of Labour members. But 139 Labour MPs voted against it, the largest such rebellion within a governing party since the Liberal scission over home rule in 1886; added to the dissident minority was a small but notable group of Tories, including some former cabinet ministers, and every Liberal Democrat in Parliament. To be precise, the dissidents voted for an amendment which found “the case for military action against Iraq as yet unproven.”

Even at the time, with Blair and his Downing Street apparat doing everything they could to bulldoze the country into war, there were plenty of detached observers who agreed with those words; almost everyone would now say they were a plain statement of fact. Few any longer dispute that the Blair government shamelessly exaggerated and distorted intelligence, or think that Blair had any justification for his claim of a ‘‘serious and current’’ threat from Iraq—and no London politician would now say, as Blair did, that we had a national duty to support Washington.

Our new government is a coalition of Conservatives under Cameron and Liberal Democrats led by Nick Clegg. Last April, not long before the election, Clegg gave a speech to the Foreign Correspondents’ Association in London. “I think it’s sometimes rather embarrassing,” he said, “the way Conservative and Labour politicians talk in this kind of slavish way about the special relationship.” Cameron was already of this mind four years ago when he said, “We have never, until recently, been uncritical allies of America.” This was an undisguised rebuke, and was also factually true.

In his rather weird testimony to the Chilcot Iraq Inquiry which is investigating the British role in the war, Blair almost boasted that he had been determined to stick by the Americans at all times, but he also confessed that he was worried about being outbid by the Tories in devotion to Washington, which seems an unsatisfactory reason for going to war. Now we have a prime minister who has already criticized “neo-conservative thinking” and its belief “that pre-emptive military action is not only an appropriate, but a necessary component of tackling the terrorist threat.” Cameron amplified this when he said that “we cannot impose democracy at the barrel of a gun” and “we cannot drop democracy from 10,000 feet—and we shouldn’t try.” More than that, he says, in harmony with his new chum Clegg, that our relationship with Washington should be “solid but not slavish.”

WHAT’S REALLY curious is how it became so slavish, and the way this illusion has persisted, in defiance of historical fact. The British are far more prone than Americans to talk of the relationship as if it were an immemorial tradition, but there was an exception when Senator John McCain visited England four years ago. “The special relationship between our two countries will endure throughout the 21st century,” he ingratiatingly told an interviewer. “I say that with total confidence because it’s lasted for 200 years.”

History is evidently not McCain’s strong suit. Following the creation of the American Republic by a rebellion against the English Crown, carried out by men such as Jefferson, who said of England that he would “lend my hand to sink the whole island in the ocean,” the United States minded its own business for generations. For all the ingenious attempts by such neoconservative historians as Robert Kagan and Michael Oren to prove that America was a global player from the start, the fact is that for 140 years after the Declaration of Independence no American troops set foot in Europe. Not only did American and British soldiers never once fight together during that time, the two countries in fact fought one war against each other in the nineteenth century and almost came to blows thrice more.

If McCain’s “200 years” is serious, then it would take us back to 1812—and the beginning of a war which saw British troops burn Washington and Andrew Jackson make his name by defeating the redcoats at New Orleans. With a large part of the British Army thereafter stationed in Canada to protect it from its southern neighbor, Sir Robert Peel warned Parliament in 1849 about the imminent danger of an American war over the Oregon border. During the Civil War, Secretary of State William Seward wanted to declare war on England and was restrained only by Lincoln himself (“One war at a time, Mr. Seward”). And in a bitter dispute after the war about a Confederate warship built in England, a Massachusetts senator demanded as recompense a sum equivalent to several billion dollars today, or alternatively the cession of Canada, which remained a long-standing territorial ambition for many Americans. 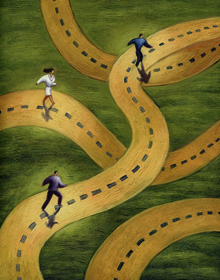