Mahan is Alive in China 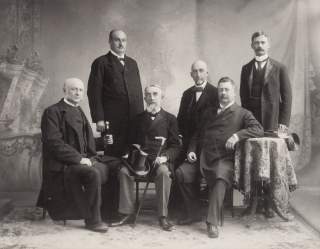 The maritime strategist Alfred Thayer Mahan continues to shape world politics long after his death--but not the way he would have expected. Conveyed in works such as The Influence of Sea Power upon History and The Problem of Asia, the theories of Mahan, a late-19th-century proponent of U.S. expansion in Asia and one of the forefathers of the modern U.S. Navy, could be turned against the United States by rising Asian powers such as China.

It behooves Washington to initiate discussions of maritime strategy with Beijing now--before Mahanian thinking becomes too ingrained in Chinese naval culture, to the detriment of U.S. security interests in East Asia.

I saw this problem firsthand. This April, I delivered a paper in Beijing at a Ford Foundation-sponsored conference on "sea-lane security." I lost count of how many times the Chinese panelists referred to Mahan. And they invariably quoted the most bellicose-sounding of Mahan's precepts, which envisions titanic battles at sea.

For Mahan, they noted, "command of the sea" meant "that overbearing power on the sea which drives the enemy's flag from it, or allows it to appear only as a fugitive; and which, by controlling the great common, closes the highways by which commerce moves to and fro from the enemy's shores." Armored battleships embodied that "overbearing power"--power that, Mahan implied, should be used to crush the navies of rival maritime nations and wrest away control of strategic waterways.

As China's economic and military power grows, that kind of thinking could fuel tensions in East Asia, home to the South China Sea, the Taiwan Strait and many other strategic waterways. It's happened before--in the years leading up to the First World War, when upstart Germany challenged the British Empire for control of the sea lanes and a "place in the sun" of empire.

Mahan's theories contributed indirectly to the outbreak of world war. Similarly, they could breed a predilection for the use of force among today's Chinese strategists.

Influential Germans such as Kaiser Wilhelm II, Admiral Alfred von Tirpitz and a host of "fleet professors" in German universities seized on the elements of Mahanian theory that justified the construction of a powerful battle fleet. "I am just now not reading but devouring Captain Mahan's book and am trying to learn it by heart," declared the Kaiser on one occasion. "It is on board all my ships and [is] constantly quoted by my captains and officers."

The trouble for Germany was that Great Britain's Royal Navy stood astride the "narrow seas" connecting the northern German seaports with the Atlantic Ocean, and thus with the modest empire acquired during the 1880s and 1890s. Having decided to build battleships, Berlin worked backwards, devising a naval strategy aimed at Britain--an island nation, reliant on seaborne commerce, that could not lightly cede its mastery over the seas.

The naval arms race that ensued was eminently avoidable. Britain and Germany had long maintained cordial relations, and their maritime interests were largely in accord. If Imperial Germany wanted to assure access to its African and Asian holdings, it could have built large numbers of long-range, lightly armed cruisers suitable for guarding the sea lanes. By contrast, battleships were tethered to their fuel supplies and could not operate far from Germany.

Britain could hardly view the German battle fleet as anything other than a mortal threat.

Consider the parallels. For now it makes little difference how Chinese strategists interpret Mahan. Preoccupied with economic development, China will refrain from doing anything that might endanger the free flow of oil and raw materials. It will remain on its best behavior during the run-up to the 2008 Beijing Olympics. And, while China's merchant fleet has surged in numbers--dozens of new shipyards are under construction - its navy remains weak.

That will change. China's burgeoning economy has already begun furnishing the resources Beijing needs to build a potent navy, much as rapid economic growth sustained the Kaiser's naval ambitions. How Chinese naval officers think about maritime strategy today will mold China's navy and the strategy it pursues later. Disciples of Mahan might opt to build against the American "threat."

To discourage Beijing from taking the ruinous path trodden by the Kaiser's Germany, Washington should make three points. First, Mahan no longer dominates maritime strategy in the West - meaning that Beijing shouldn't be overly worried about the goals of U.S. Navy operations in China's backyard. Second, it's hazardous to read Mahan, who emphasizes peaceful commerce as much as apocalyptic fleet engagements, selectively.

Finally, the United States and China have a mutual interest in defeating threats such as piracy and terrorism, which imperil seaborne trade throughout East Asia. Far from embarking on a needless naval arms race, the two maritime powers should work together in the common good.

James Holmes is a senior research associate at the University of Georgia Center for International Trade and Security and an adjunct professor of strategy at the U.S. Naval War College.