AS THE end of 2011 approached, the Obama administration appeared positioned to have presided over three definitive foreign-policy outcomes in the broader Middle East for which it could claim substantial credit. The death of Osama bin Laden, while not bringing the war against al-Qaeda to an end, surely closed an important chapter in the long-term struggle against militant Islam. Others will rise to take bin Laden’s place at the top of the al-Qaeda hierarchy, but his death leaves a void in that organization that will be hard to fill.

The death of Muammar el-Qaddafi similarly brings to a close the sometimes odd but almost always violent struggle between the United States and Libya. Washington played an important role in Qaddafi’s downfall and thus helped set the stage for the transition that will follow. Libya may or may not move toward democracy, but at least it is free of one of the world’s most mercurial, brutal and enduring dictators.

Finally, the withdrawal of U.S. combat troops from Iraq looks to bring about a new stage in the nearly ten-year war. There is already a healthy debate about the purposes, costs and outcomes of this war, one which helped bankrupt our treasury in pursuit of objectives that even the Bush administration had trouble defining. But with that chapter’s conclusion, 2012 will usher in an opportunity for Iraq to make its own way, absent American forces on the ground.

Against this backdrop of successes, two issues stand apart. Iran remains intent on developing nuclear-weapons capability, and no combination of U.S. and international efforts—diplomacy, sanctions or threats—has led Iran to change its policy. The Middle East peace process, the subject of this essay, also stands apart. Described early and often by President Obama as one of the signature issues of his administration, the peace process has achieved neither a definitive end nor a tentative beginning. Rather, it is stuck.

The recent decision by the Palestinian Authority (PA) to seek reconciliation with Hamas and gain membership status in the UN reflects two important perceptions on the part of Palestinians—first, that serious negotiations with an Israeli government led by Benjamin Netanyahu are not possible; and, second, that the Obama administration cannot or will not exercise enough pressure on Israel to stop settlement activity, the Palestinians’ precondition for resumed negotiations. They may also view prospects of a two-state solution as diminishing rapidly.

For its part, the Netanyahu government in Israel has tried to portray itself as willing to talk, and the prime minister has repeatedly called for negotiations without preconditions. But the actual behavior of the Israeli government raises suspicions about that claim. The ten-month moratorium on new housing starts to which Israel agreed in 2009–10 did not stop the pace of ongoing construction in the territories. New housing projects beyond the Green Line have been announced regularly since 2010 and have accelerated recently in response to Palestinian diplomatic successes in UNESCO and elsewhere. Even when direct talks took place in September 2010, Netanyahu reportedly did not bring substance to the table. Israelis, like Palestinians, may have concluded that prospects for a two-state settlement are fading.

All this raises two fundamental questions: Are we at the cusp of a new phase in the long-running Arab-Israeli conflict, in which the two-state paradigm no longer motivates Palestinians and Israelis to seek a peace settlement? Have the diplomatic efforts of the Obama administration contributed to this possibility by failing to bring American diplomatic power to bear in the process?

THE ARAB-ISRAELI conflict has passed through three broad phases since the establishment of the state of Israel in 1948. The first phase was marked by the success of Zionism in creating the state and by the dispersion of Palestinians as a result of the 1947–49 conflict. The second phase began in June 1967, marked by the defeat of Arab armies in the Six-Day War, Israel’s occupation and settlement of the West Bank, Gaza and the Golan Heights, and the reemergence of the Palestinians at the center stage of the conflict. Today, we are living in the third phase, in which Israelis and Palestinians have been trying to reach a conflict-ending settlement through negotiations leading to a two-state outcome. The Madrid Conference in 1991, the Oslo accords in 1993 and the “road map for peace” process launched in 2003 have been directed at defining the modalities and substance of a peace settlement.

The Madrid Conference, the first breakthrough, launched parallel bilateral and multilateral peace talks. For the first time, Israel conducted bilateral peace negotiations with each of its neighbors. And for the first time, Arabs from the rest of the region sat with Israel to discuss transnational issues such as water, the environment and economic development. The Madrid talks proceeded in fits and starts but did not accomplish much substantively.

The Oslo accords resolved what appeared to be the most important lacuna of Madrid, namely, defining the role of the Palestine Liberation Organization, which had been left out of Madrid, and thereby giving Palestinian decision making the definitiveness it had previously lacked. In 1993, Israel and the PLO agreed on mutual recognition, a process of negotiations and a timetable designed to culminate in Palestinian statehood by May 1999. But things didn’t quite turn out that way. Negotiations proceeded almost endlessly but without conclusive results. Bad behavior by both sides created an atmosphere of distrust: Palestinian violence and terrorism never really stopped, nor did Israeli settlement activities. Palestinian leader Yasir Arafat found it difficult to overcome his persona as a revolutionary leader and embrace the core concessions and trade-offs required for success. Israeli prime minister Ehud Barak did reach beyond the political constraints of Israeli society to put forward far-reaching ideas, but even they fell short of the minimum requirements of the Palestinians. For its part, the Clinton administration tried hard to keep the process going but ultimately failed to deal with the two fundamental requirements of success: stopping the bad behavior of both sides and defining the substantive trade-offs required for a deal.

The road map was developed by the Bush administration and the so-called quartet of Middle East peacemakers (the United Nations, United States, European Union and Russia). Its aim was to correct some of the weaknesses of Oslo by aligning a three-stage process of negotiations with changes in the parties’ behavior. The two sides committed themselves to fulfilling certain responsibilities: for Israel, this meant a complete settlements freeze and increasing Palestinian mobility in the territories; for the Palestinians, it meant cracking down on terrorist infrastructure and accelerating the state-building process. The road map required mutually reinforcing actions from each side in parallel and sequentially. But this process also collapsed, primarily under the weight of Palestinian terrorism that the PA, under Yasir Arafat, could not or would not police.

In a last-gasp effort by the Bush administration to salvage the two-state solution, the Annapolis Conference was held in 2007, leading to intensive direct negotiations during 2008. To the surprise of everyone, these proved to be the most serious and far-reaching negotiations to date. Former prime minister Ehud Olmert, in his recently published memoir, details how close the parties came to bridging the gaps between them even on the most contentious issues of borders, settlements, Jerusalem and refugees. Some of what Olmert has written has been confirmed in the leaked “Palestine Papers” that provide insight into internal Palestinian deliberations on the core issues. And former secretary of state Condoleezza Rice confirms Olmert’s assertions in her own just-published autobiography. Indeed, it can be argued that the only element missing in the Annapolis process to help the parties bridge the final gaps was a robust American role. Rice traveled constantly in search of the finish line but never got the backing of the White House to bring serious enough American influence to bear on the negotiations.

Many believed the Obama administration would provide that final missing puzzle piece. Here was a White House that inherited a negotiating process that had produced significant progress. Here was a president who proclaimed at the outset that he valued peace in the Middle East as a U.S. national-security interest, not as a favor being done for the parties. Obama appointed a senior, experienced negotiator, George Mitchell, to carry the ball. And then the administration proceeded to fumble. Instead of a comprehensive peace strategy, Washington tried confidence-building measures, including the quest for a complete settlements freeze. The new Israeli prime minister, Benjamin Netanyahu, wouldn’t bite. The White House tried proximity talks, direct talks and, most recently, quartet-led talks designed to lead to further negotiations. Not only did the tactics not work, but the administration also was revealed to have little stomach for the rough-and-tumble of actually trying to advance the peacemaking process. Confronted with opposition to its ideas, Washington invariably retreated.

The result is that the processes and progress of the past are now in doubt. The search for peace is in a state of acute crisis, with many analysts arguing the basic paradigm of peacemaking is dead. But in the Middle East, as a friend once pointed out, dead is not really dead until it is dead and buried. The question is whether the peace process is merely dead, or dead and buried. 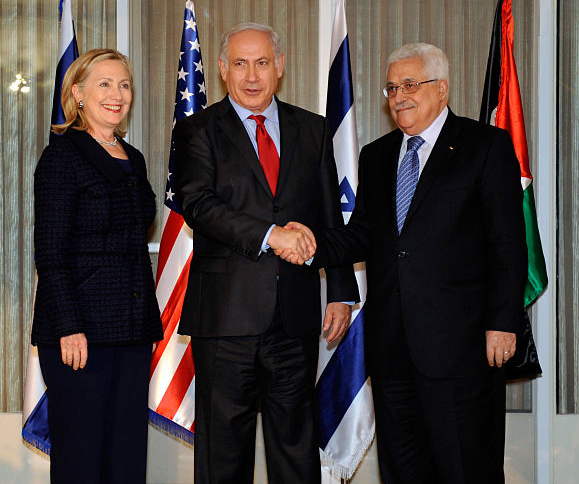