URBI ET Orbi (“for the city and for the world”) is the traditional blessing the pope offers on special occasions. Although he has at times pronounced it in other venues—St. John Lateran, the pope’s official ecclesiastical seat, or the Quirinale, now the Italian president’s residence—the pontiff usually intones the prayer from the balcony overlooking St. Peter’s Square. The ancient ceremony reminds us that the pope holds office as head of the Church because he has been elected bishop of “the city,” Rome; that he is the leader of a global organization whose very name, “Catholic,” means universal (making the whole world his parish); and that he is the head of a miniscule but internationally recognized sovereign state.

Vatican City is in its own way a nation just like any other, with foreign-policy goals, global strategies, and potential allies and adversaries. Referred to officially as “the Holy See,” it is an active participant in a wide range of international institutions including the EU, the Organization of American States, the WTO and the International Labor Organization. It holds official observer status at the UN. And curiously, four decades ago the Vatican solemnly announced that it would adhere to the Nuclear Non-Proliferation Treaty.

It is also a state with which 178 nations now have diplomatic relations, and most maintain permanent embassies to service their connections with the Vatican. Since 1984, when President Ronald Reagan dispatched William Wilson to the post, this corps of diplomats includes one from the United States. It is presently Ambassador Miguel Díaz, a Cuban-American liberation theologian appointed by President Barack Obama.

For its part, the Vatican has at its disposal a retinue of diplomats, called “nuncios,” stationed in countries around the world, and each one receives extensive training at the Pontifical Ecclesiastical Academy, founded under Pope Clement XI in 1701. According to the Vienna Convention on Diplomatic Relations of April 1961, ambassadors of the Holy See are recognized as deans of the diplomatic corps in the countries where they are stationed. This honor may derive from the fact that the first such nuncio—to Venice—was sent in 1500, considerably before nation-states began to emerge.

A retired American intelligence officer once told me that the Vatican probably has the world’s most effective intelligence-gathering operation. But other than being the eyes and ears of the Church, exactly what, one might ask, are all these people in fact doing? What specific policies do they advocate? Do they have any effect? And perhaps above all, just how much influence, if any, does the Vatican actually wield in world affairs?

The Church’s goals are deeply embedded in a centuries-old tension between its political ambitions and its religious aspirations, a tension which continues today. And as Islam begins to encroach upon more and more of Catholicism’s traditional “territory,” the Vatican must strive to balance its commitment to spreading its message with its official policy of fraternal relations with other faiths. Its success (or failure) will affect us all, for with its more than 1 billion adherents and vast array of media outlets, hospitals and universities, the Catholic Church will inevitably exert at least some degree of influence on a wide spectrum of issues.

GIVEN THE long history of the Catholic Church, it should not be surprising that its leaders want it to nurture both a spiritual and a secular persona, or that the two are not always clearly distinguishable. After the fall of the Roman Empire, the Church became, for centuries, the de facto political authority for most of Europe. Some popes were strong, others weak. They were frequently challenged by kings and emperors, and sometimes banished from Rome (once in a while by the very citizenry of “the city”). But they continued to play a role, often a decisive one, in secular affairs. Not only did Leo III crown Charlemagne, but Pius VII enthroned Napoléon (who, however, famously placed the crown on his own head).

The Church has never been reluctant to wield secular power, including for centuries an army, or to enlist allies to advance its objectives. The alliance of the pope and the king of France defeated the Cathars of Provence in the thirteenth century to the decided advantage of both throne and altar. The pontiff got rid of a troublesome heresy, and the king added a vast new domain to his realm. Nearly three hundred years later, the Church looked upon the gory subjugation of “New Spain” as a “spiritual conquest.” Soon after, some Jesuits suggested a similar approach to China: namely that it should be militarily subdued so that its people could be brought into the true Church. But the popes, preoccupied with other matters at the time (such as the Protestant Reformation), never acted on this bold proposal. One cannot help imagining today what might have happened if this ambitious scheme had been successfully executed, and what a difference it might have made in the following centuries of world history.

But times have changed. In 1870, during the Risorgimento, Italian nationalists Count Camillo di Cavour and Giuseppe Garibaldi deprived the pope of his extensive lands in Italy called “the Papal States.” Pope Pius IX condemned the conquest as illegal and then assumed the role of victim, declaring himself “the prisoner in the Vatican.” Only in 1929 did the papal Secretary of State Pietro Gasparri negotiate the concordat with Mussolini’s Italy that created a miniature sovereign Catholic state. But did the loss of its worldly estate divest the Church of its international interests or its secular and religious influence?

Most scholars now agree that it did not, at least not entirely. Losing temporal control over a few thousand square miles in central Italy may even have worked to the Vatican’s advantage. With no realm to defend and no army, it soon gave up any territorial ambitions and began to rely increasingly on its moral and spiritual authority.

EVER SINCE, people have struggled to decipher exactly what agenda this sprawling, religio-political entity intends to pursue. It might well be a powerful actor, but for what purposes will its actions be taken? And what will shape its decisions? At least in theory (that would be, according to the Code of Canon Law), the Holy See’s diplomats should “strive to promote matters which pertain to the peace, progress, and cooperative effort of peoples.” But these goals are extremely general, and the Vatican, like most other sovereign powers, does not disclose its often-convoluted inner procedures to outsiders. Getting a good grasp on actual policies takes much more work. Vatican watchers, like a previous generation of Kremlinologists, vie with each other in trying to decode the carefully parsed articles in L’Osservatore Romano, the semiofficial organ of the Holy See that publishes papal statements and church documents, and in La Civiltà Cattolica, a Rome-based Jesuit publication vetted by the Vatican secretary of state. Other sources perused for any bread crumbs that might hint at papal intentions are the pope’s annual New Year’s Day message to the diplomatic corps and the short speeches he exchanges with new ambassadors when they present credentials to him. These reveal at least what the Vatican believes would be prudent for the public to know. Scrutinizing them, however, often yields little more than what the Kremlinologists could divine from Pravda. How any particular policies were arrived at remains guesswork.

As hard as it may be for outsiders to recognize, the policies of the Vatican are driven, not entirely but to some extent, by theology. And when it comes to theology, no analysis is useful that does not begin with the pope, one of the world’s last absolute monarchs. It is also often difficult to realize that these theologies vary from one pope to the next, and even over the term of a given pontiff. Pope Pius IX (“Pio Nino”) mutated from a “liberal” to a tough conservative during the thirty-two years of his pontificate (1846–78). He was succeeded by Leo XIII (1878–1903), often considered a social progressive. Popes are important, especially since, in the past 150 years, the administration of the Church has become increasingly centralized in the papacy and its bureaucratic arm, the Roman Curia, in which the pope has the final word.

Such recent pontiffs as John XXIII, who assembled the reformist Second Vatican Council (1962–65) that aspired to reconcile the Church with the modern world, and Paul VI tried, sometimes with modest success, to exert influence in world affairs. The first Polish pontiff, John Paul II, openly supported his country’s resistance to Soviet domination. Except for the quaintly costumed Swiss Guard, equipped only with halberds, the pontiff no longer has the “divisions” Stalin once scornfully asked about, and the popes have tried to build a reputation as advocates of peace and justice as they see it.

NOW WE are faced with Joseph Ratzinger, who became pope in April 2005. Some signals are easy to read. His choice of a name, “Benedict XVI,” sent a clear message of what might be expected from his papacy. The new pope made it known that he had picked the name from two previous Benedicts. The first, the sixth-century Benedict of Nursia, was the founder of Western monasticism and is also the patron saint of Europe. This suggests that, as pope, Ratzinger wanted to work out the dream he had nourished for decades, that of transforming the European Church into a smaller, more disciplined (might one even say “monastic”?) counterculture in order to “re-evangelize” a continent, which in his view was slipping further and further into a morass of secularism and moral relativism. In this way he would take up the work of the first Benedict, whose disciplined monks first Christianized Europe. Ratzinger’s other namesake, Pope Benedict XV (1914–22), is noted for his strenuous, if ultimately unsuccessful, efforts to head off World War I, and then his attempts at peacemaking and minimizing suffering in the grips of war. 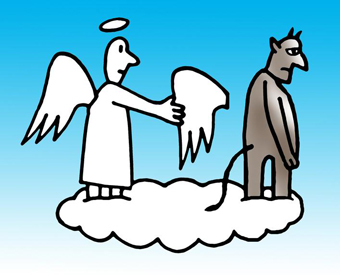