THE OLD Order no longer qualifies as an order. The term “world order” denotes a stable distribution of power across the world. But power concentration today is in a state of tremendous flux, characterized by rapid diffusion and entropy toward a broad set of emerging powers that now share the regional and global stage. Western-centered multilateralism represents at best a partial component of a world system that is increasingly fragmented.

Nostalgia for the post–World War II or post–Cold War periods will not affect this picture. At those junctures, America had an opportunity to fashion a new world order. After World War II, America capitalized on this moment; after the Cold War, it squandered it. The world has moved beyond even the assumptions embedded in President George H. W. Bush’s famous “new world order” speech to a joint session of Congress two decades ago in which he envisioned a unipolar order managed through a multilateral system. Instead, the world has quickly become multipolar, institutionally polycentric and even “multiactor,” meaning nonstate groups such as corporations and NGOs are commanding more and more influence on key issues. This trend seems irreversible, and it needs to be digested before any kind of new global-governance mechanism can be formulated, with or without American leadership.

One leading contributor to the demise of the Old Order has been the so-called rising powers such as China, India, Russia and Brazil. These states increasingly serve as anchors of regional order and also wield influence beyond their immediate neighborhoods. By most measures, China is already a superpower; its presence is factored into diplomatic, economic and strategic decisions by nearly all countries worldwide. India, Brazil and Russia lag behind China, but it’s a reality of geopolitics that states do not need to forge new systems of order to undermine the existing one.

The set of nations that can influence global system dynamics and great-power foreign policy is much broader than just those countries famously labeled the BRICS (short for Brazil, Russia, India, China and South Africa). What I have called “Second World” nations coalesce into regional entities of significance—Latin America, the Middle East, central Asia, Southeast Asia—whose composite nations and complex regional dynamics will help shape the future of geopolitics. Second World states are important for their geographic position, natural resources and regional influence. Some of these states I have highlighted are Colombia, Algeria, the United Arab Emirates, Iran, Kazakhstan and Indonesia. All are pivotal Second World players whose decisions and alignments could affect the balance of power and influence among the United States, China and the European Union.

Who are the other Second World states, and precisely how will this collection of nations influence the course of world events? It is important to note that not all of these emerging states are on a linear path toward regional-power status. Some will rise while others stumble. But collectively, the ones that rise will exercise a significant pull on events. One reason I repurposed the term Second World for these countries was to emphasize their internally divided nature, embodying both First World and Third World attributes. Of the approximately two hundred states in the world today, only thirty are members of the First World club of the Organisation for Economic Co-operation and Development (OECD). Meanwhile, the bottom forty-eight (mostly in Africa) are formally labeled Least Developed Countries (LDCs). In between lie the Second World nations.

There are about a hundred of them, and there is little certainty these days over which ones will rise into the First World and which will descend into the bottom category. It is important to note that most of the world’s poor today are not congregated in the LDCs but rather are spread across developing countries and emerging markets. The result is a high prospect for internal instability within those countries. No doubt the Arab Spring, which arose in what had seemed to be relatively stable regional powers such as Egypt and Syria, has its roots partially in such inequalities. But, whether Second World states rise or stumble, their emergence—and their drive to find some kind of national expression in a rapidly changing world—will exercise significant influence on global developments.

THIS TREND of Second World emergence is viewed best through a number of distinct geopolitical prisms that together forge an analytical framework. First, Second World nations do not look to great powers for leadership, especially not the Western powers that have largely dominated the globe since about 1500, but they are also wary of leading challengers such as China. Instead, they will go their own way and influence events, to the extent that they can, based on their own interests. Their alignments with Western nations, if any, will be ad hoc. Second, these Second World nations are forging new regional-power relationships that will have an impact on future world events. Sometimes jockeying for position in their neighborhoods and sometimes forging potent regional cooperatives, they will become significant global players largely through strategic activity at the regional level. And third, these emerging nations will be looking for new modes of governance and new ways of ordering their economies. Western pluralism and capitalism aren’t likely to reign as models for these countries to any significant or consistent degree, and their enthusiasm for the norms and institutions of today’s liberal international order is likely to be limited.

Looking at these developments through the first prism, it is clear that Second World nations, in going their own way, will not move toward any kind of collective action. Instead, these countries see themselves as influencing the globe’s new order by radiating outward from their particular vantage points. They do not seem interested in attaching themselves to major global players on an ongoing basis, whether the United States or China. This is one reason it is a mistake to view the BRICS, for example, as any sort of coherent bloc. Two major potential conflict scenarios exist among these five nations—namely, between Russia and China and between China and India.

The result is a state of flux in the world that intensifies as more powers rise onto the scene and the scene becomes increasingly complex. As they rise, these powers pursue what might be called “opportunistic multialignnment,” in which they simultaneously pursue positive relations and advantage vis-à-vis greater powers. For example, they will play greater powers against each other and seek to leverage great-power rivalries. One can see this in the proxy competition between the United States and China to influence Second World and Third World nations. Every regime labeled a “rogue state” or “state of concern” by the United States—Cuba, Venezuela, Sudan, Zimbabwe, Syria, Iran, Uzbekistan, Myanmar and North Korea—receives active Chinese military, economic and diplomatic support. Whether in a bipolar or multipolar environment, Second World nations will seek to expand disputes involving minor powers into broader great-power tensions.

This approach gives Second World nations an opportunity to influence events at the margin even when they may not be rising powers in themselves. Disputes involving great powers and lesser states tend to provoke responses from the latter’s great-power sponsors, and this provides leverage to these upstart nations. This is but another example of Second World states pursuing their own paths rather than subordinating themselves to the strength and influence of great powers.

In the environment of uncertainty that prevails in today’s transition toward multipolarity, small perturbations among nations can quickly ripple into much larger confrontations. This is reflected in a trend whereby Second World regional powers are aggressively acquiring increasingly hefty armaments. This weapons-buying binge is motivated by a natural drive to modernize, concerns over regional rivalries and a felt need to hedge against waning American influence. Despite hosting substantial U.S. military assets on huge bases, Saudi Arabia and the Persian Gulf petrostates are rapidly acquiring F-16s, tanks, medium-range missiles and antiaircraft systems—justified yesterday by the rivalry with Israel, today by the Iranian menace and perhaps tomorrow by each other. In the Far East—particularly in Indonesia, South Korea and Vietnam—a similar dynamic is under way. The American defense establishment is seeking to draw a line in the waters of the South China Sea, where a more assertive China has recently bullied forward with territorial claims betraying an unusual diplomatic aggressiveness.

Russia perhaps best exhibits the discrepancy between the assumptions of some Second World states and the harsh global realities. At the height of Vladimir Putin’s power during his first administration as president, magazine covers gushed about a resurgent Russian superpower, ignoring the rapidly deteriorating fundamentals of Russian infrastructure and demographics. As its population shrinks toward a hundred million and clusters in its European regions west of the Ural Mountains, a far more modest picture emerges of Russia’s future. It becomes, like Turkey, an East-West conduit for natural resources—a bridge, not a hegemon. Russian influence peaked during the Soviet era, and the Eurasian geopolitical future will continue to unfold at Russia’s expense.

Here is where we see the ironies of Second World diplomacy most acutely. Summits between Putin and China’s Jiang Zemin regularly hailed the need for an antihegemonic bloc to counter American aggression. India’s Manmohan Singh and China’s Hu Jintao declared a mutual pact to forge a “new world order.” Each of the so-called BRICS has hosted gatherings of like-minded rising powers that took potshots at whatever American foreign-policy missteps captured the day’s headlines. But, while Second World states share an anti-imperialist impulse toward the West, they are wary of each other. China and India have several outstanding territorial disputes, with tensions flaring and even cross-border altercations stoking fears of another war reminiscent of the 1962 conflict. Russia’s nuclear posture is now focused on Chinese encroachment on its eastern enclaves, where Chinese firms rapaciously extract minerals and timber and purchase growing supplies of oil and fresh water. Population-growth rates among ethnic Chinese are a cause of concern as well. In global trade disputes, Brazil, which declared a “strategic alliance” with China in 2004, now sides with the United States and the European Union against China, which stands accused of dumping cheap products and undermining local industry. Thus, Brazil is as much a contributor to the West (especially in terms of energy security), at least for now, as it is one of the BRICS. 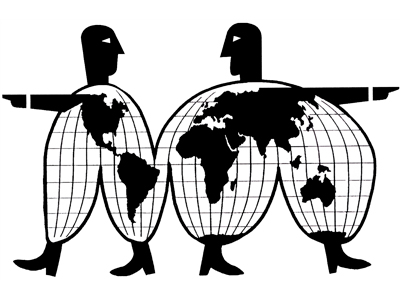