LEAVING ASIDE political and ideological malcontents as well as defenders of the faith, it seems to me that three points can be made fairly regarding President Barack Obama’s foreign-policy and national-security record.

First, he has captured the potent political center, a considerable feat for any Democrat. He’s done so mainly by staying out of big, costly trouble. He further helped himself by co-opting some of the popular hard-nosed rhetoric and actions of traditional realists not generally associated with Democrats. Right-wing extremists did their part by practically conceding the middle ground with their unrelenting hawkishness. All of this permitted Obama to outmaneuver the Republicans and hold the center. In doing so, he has given Democrats their first real shot at being America’s leading party on foreign policy since Franklin Roosevelt and the earliest days of Harry Truman.

This has been nothing short of a political coup that could reverse long-standing Republican electoral advantages on national security.

Second, Obama managed a complex range of tactical challenges quite well, improving significantly on the international position he inherited from George W. Bush and generally bolstering America’s reputation. Specifically, he managed America’s exit from Iraq well and developed a new, focused and effective military strategy to counter terrorists. Inevitably, experts will quarrel over whether Obama could have done more of this or less of that. But on the whole, he guided America capably through the kinds of problems that often had turned sour in administrations past. Even where Obama took wrong turns—and there were a number of these—he mostly sidestepped costly mistakes, with the exception of Afghanistan. He was aided in avoiding such big errors—quite an accomplishment—by possessing a clear sense of the limitations of American power.

Third, while Obama saw what American power could not do, he failed to appreciate what American power could do, especially when encased in good strategy. Thus, his principal shortcoming was failing to formulate strategy and understand its interplay with power. He should be faulted here, even though most who fault him usually fail to produce their own viable strategies—those magical brews of picturing pitfalls and opportunities, hammering out attainable objectives and focusing the use of power. To this day, Obama’s Afghanistan strategy seems little more than a disjointed list of tactics. More sorrowfully on the strategic front, he has yet to put economic resurgence and U.S. economic power at the core of the national-security debate, where they must be, for an effective national-security policy in the twenty-first century. To be sure, he has spoken of this need on occasion, but in his hands it has seemed more a rhetorical stepchild than a key ingredient of international power and successful strategy. Without strategy and without economic renewal to power it, Obama neither has achieved lasting strategic breakthroughs nor laid the groundwork for them later on.

Those who have easy solutions for foreign-policy challenges don’t know very much about foreign policy. I’ve tried to be mindful of the great difficulties and of reasonably varied policy perspectives—and of the fact that, in the course of events, I’ve changed my own mind on matters small and large. I am mindful, too, that strange occurrences often attend the months preceding presidential elections.

Obama’s position at the political center in U.S. foreign policy has enabled him to deflect classic Republican charges of liberal weakness that always kept Democrats on the defensive. He and his team also adopted much of the realist language of “interests” and “power,” which further enhanced public confidence in him. Holding center field allowed Obama to move both left and right to block attacks or gain support. At times, though, such political gain came at the cost of contradictory actions that confused audiences both domestic and foreign. As for unhappy liberals, Obama often has flicked them away almost as easily as Republicans have.

In taking over the middle, Obama had help from a centrist-oriented Bill Clinton, who certainly was an elusive target for Republicans in the 1996 elections. However, Clinton’s immunity often derived from his tiptoeing around international issues rather than boldly seizing the center. Obama seized that center. It must be said that, during the Clinton and Obama years, Republicans contributed to their own decline with unadulterated hawkish rhetoric. The 9/11 events briefly boosted Bush and Republican hawkishness, but that faded soon enough.

Obama earned the people’s trust. He and his new Democrats averted the usual hellholes because they understood the limits of American power far better than Bush had, particularly when it came to the shortcomings of military force. Yes, the United States had military superiority after the Cold War. Bush and the neocons saw this clearly. But they went on to draw the wrong conclusion—namely, that the way to exercise that superiority was to threaten force and wage war. Obama and his minions grasped the reality that American superiority can prevail in conventional wars against nonsuperpowers (driving Iraq out of Kuwait), in operations to decapitate regimes in their capital cities (Saddam Hussein in Baghdad; the Taliban in Kabul) and in commando-like operations. But unlike the Bush contingent, the Obamanites saw that conventional military superiority cannot pacify countries or resolve civil wars and vast internal conflicts. With the notable exception of Afghanistan, the new Democrats respected this reality.

Once in office, Obama aided himself politically by quickly ditching the liberal foreign-policy agenda of his campaign. By the end of his first year, he had quietly abandoned promises on global warming and Guantánamo. The former proved much too expensive in the short run, and the latter had become a symbol of liberal naïveté. He hushed conservative critics with a more skeptical tone on Palestinian-Israeli talks and a tougher stance on Iran and North Korea. He guarded himself further by stiffening his position on economic and humanitarian issues with China and stressing his pro-human-rights posture on Russia.

Obama then deflected the Republicans’ remaining bullets with his amplified and winning war against terrorists. He topped the antiterror charts when, in the face of considerable risk, he ordered the killing of Osama bin Laden in May 2011. He punctuated this by eliminating Anwar al-Awlaki, another monster, in September 2011. Instead of sending in the troops to fight open-ended land wars, he fought the terrorists with special-operations teams and drones. Whatever you think of his administration’s tendency to leak news of its victories or the ethics of having a “kill list,” in his four years, Obama has taken the fight to our enemies and dealt them a staggering blow.

Only buckshot remained in the Republican political arsenal. The GOP was reduced to complaining about Obama’s abandoning Bush’s democracy-promotion agenda, delaying the elimination of Egypt’s and Libya’s dictators, not taking “action” to remove Syrian president Bashar al-Assad and generally forsaking the Arab Spring. Obama barely had to respond, given the prevailing political sentiment. Jimmy Carter and Bill Clinton must have been jealous.

But Obama surely knows that history is closing in and will be seeking real accomplishments. He has to be aware that at some point even the sleepy press will ask: “Where’s the beef?”

This lack of beef brings us to the major hole in Obama’s foreign policy—the paucity of genuine strategic thinking. While the president’s political leeway was constricted on most domestic issues, he had a relatively free hand on foreign policy, especially after he demonstrated he could handle issues reasonably well. To be sure, he stayed attentive and responsive to conservative attacks on his actions abroad. For the most part, however, he made foreign policy his turf and ran a highly centralized one-man show. The cost of this overconcentration was that he usurped even the details of policy from his principal cabinet officers and thus left himself little time to conceive and craft a long-range strategy. Fashioning strategy takes both time and experience, neither of which Obama possessed. Further, there was a deeper impediment still—his personal predilections and personality. He was not built for strategizing. Strategy calls for making bets and taking risks that the strategist must stick to over time, come what may. Strategy requires reducing flexibility, cutting off options to follow a certain course and not getting overwhelmed by details. These traits, too, ran counter to Obama’s disposition to shift nimbly and keep options open. Strategy requires sticking to your guns, with some discomfort, in the face of pressures to trim sails.

Strategy is also about figuring out precisely how to use the power you have. Even with the decline in America’s economy and the shifting sands of international affairs, one remaining constant is that nations the world over still recognize Washington as the indispensable leader. America never had the power to order others around—not after World War II nor at the Cold War’s end. But now more than at any point since America’s global reign began, other countries have the power to go their own way and say no to Washington. America may be the only nation that can lead, but with less relative power, it needs good strategy more than ever.

Such strategic considerations are at the heart of the exercise of power. Obama does not have an overarching strategy, nor did Bill Clinton or George W. Bush. George H. W. Bush did: end the Cold War without a hot war by helping Soviet leaders dismantle their empire. President Nixon and Henry Kissinger did as well: bury the ill effects of the Vietnam War by skywriting America’s unique diplomatic power, make peace between Egypt and Israel, open up relations with Communist China, and use that as leverage against Moscow and ties to Moscow against Beijing. Best of them all, President Truman created two handfuls of international institutions for the exercise of America’s economic power—the IMF, the World Bank, the UN, the Marshall Plan, NATO and more. In the face of Soviet military superiority in Europe and Chinese superiority in Asia, that power was key for Truman, as it was for Dwight Eisenhower. Through these institutions, and thanks to sustained U.S. economic growth and superior military technology, Washington implemented the brilliant policies of containment and deterrence. 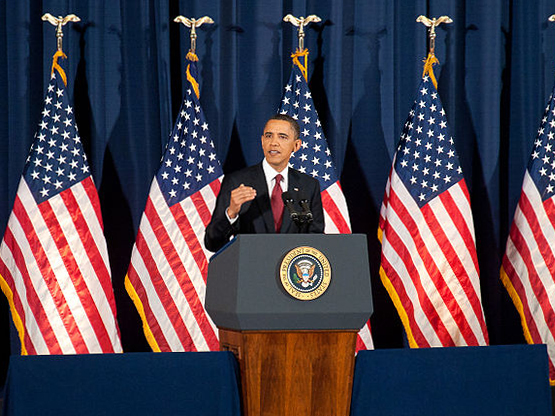 Pullquote: Obama’s position at the political center in U.S. foreign policy has enabled him to deflect classic Republican charges of liberal weakness that always kept Democrats on the defensive.Essay Types: Essay