IN LATE April 2003, I rode in an open car down Baghdad’s wide-open airport highway. U.S. Army and Marine units had seized the city just two weeks before, at the end of a short invasion. I had come to Iraq for a few months, detailed to the White House from another agency, and I was heading that morning to Basra, the southern city occupied by the British Army.

At the airport, I climbed into a C-130, an old model of the transport workhorse with just a few tiny windows. We were heading for a first official visit to the British zone, traveling with the retired U.S. Army general Jay Garner, the three-star commanding the occupation authority called the Office of Reconstruction and Humanitarian Assistance (ORHA). When taking the job, Garner expected that his ad hoc occupation entity, and its anodyne acronym, would disappear in three months or less, leaving the Iraqis to rule themselves.

It was not to be. As a dazzling dawn broke over Mesopotamia, Garner already had become the invasion’s first political casualty, the terms of his engagement rewritten back in Washington, changed from “rapid departure” to “indefinite stay.” From my marginal place, I saw Garner working hard at what needed doing, predicated on our need to get out of Iraq almost as quickly as we had arrived.

Settling into the airplane’s canvas seats, his staff fussed over briefing books. Our eyesight was dim as the outside glare yielded abruptly to the plane’s darkness. When our eyes adjusted, we saw boxes and equipment secured on the rollway between seats placed parallel to the fuselage. The old plane lifted into the sky; quite soon, tactics like tight takeoffs or the release of missile-distracting flares would become routine, as fears grew of ground-to-air attacks. For the moment, though, the country lay prone, unsure of our next moves, and we felt no fear of new attacks. The day before, I had walked around the old city, even meandering through the ancient book market.

Inside the plane, just in front of me, more shapes became discernible in the gloom. Astonished, I saw tiny lights blinking; they were from intravenous pumps and vital-sign monitors attached to heavily medicated soldiers strapped to stretchers. The war had ended two weeks earlier, yet here were new casualties. I looked around: C-130 noise levels famously doom all but short, shouted conversation. If you try to speak, you must also use pantomime; mouthing “WATER” also requires hand gestures mimicking the act of drinking. I remember thinking, “What word and gesture can alert others on the plane to these lives ebbing away unnoticed in front of us?” I locked eyes on a staffer sitting on the other side of the prone figures. He saw it too.

As the plane flew south, I realized that these sedated soldiers were badly wounded, their faces locked in unreachable repose. These first postinvasion casualties gave me an almost-visceral jolt, a mute warning of dangers to come and a sign of the risks and vulnerabilities that always surface when conquerors presume too much from victory. I had been a war correspondent in Asia and had also covered the 1980s Iran-Iraq war, but this was my first time in Iraq. I didn’t know much. But I knew these casualties were tied to a very short fuse in this country. Here we sat, victors in a sullen nation, only nominally in charge of a society debased by wars and sadism.

On that dawn flight to Basra, we might—had we been paying attention— have sensed the urgency of the brief moment in which we still held the initiative. Even then, in the first dawn of our uninvited tenure, the monitor lights had turned amber. Even in the first exuberance of conquest, that moment and many others should have given cause for pause.

Then we arrived in Basra, center of the British occupation zone. The visit’s agenda—lines of authority, intended occupation outcomes, the usual fuss and feathers—dominated staff meetings over the next two days. Not long afterward, street ambushes and IEDs would increase, as would the risk of simply walking the streets. All that lay a few weeks away, but some in ORHA and the U.S. military could see that we were already losing the “Golden Hour,” a term taken from trauma-response medicine but, in politics, connoting the brief slot of time in which the gods of favorable fortune may still be summoned. As James Stephenson chronicled, this term was widely used from the beginning of the occupation. I think we lost that moment only a few weeks after taking the country. Sands from the Golden Hourglass started emptying from the moment we arrived, even before our most egregious missteps (sweeping de-Baathification, abolishing the Iraqi Army, marginalizing the Sunnis—actions that the prevailing consensus today, a decade on, now sees as irreparable blunders). Back then, with an awful dictatorship eliminated and the air suffused with freedom, the occupier’s task seemed possible. Daunting, but possible. But what we did from the get-go made it otherwise.

RECENTLY PUBLISHED or broadcast ten-year remembrances of the 2003 Iraq invasion rarely touch on the victory itself, as if history has become indifferent to the short, swift defeat inflicted on Saddam’s regime. So much of the war’s messy aftermath lies in the same demoralization that enabled the quick victory, as much of Iraq’s military chose to stand aside from the path of our invasion, expecting not to be marginalized as the quid pro quo. Our initial appearance of invincibility couldn’t overawe them indefinitely.

But there’s another story: few if any preconditions for a successful occupation of any duration existed in Iraq. Those that did we eliminated in rapid order.

Specifically, we failed: to understand that large parts of the Iraqi armed forces did not feel beaten; to realize that we had days, not months, to establish a tough, firm authority—a shortcoming that went far beyond our tolerating the initially unrestrained, but highly publicized, looting; to keep the distraction of venal émigrés, carpetbaggers, contractors, NGOs and aid agencies to a minimum; to listen to ideas about occupation policy from our three major foreign allies, Australia, Britain and Japan; to give genuine plenipotentiary authority to the occupation chief, in order to reduce backbiting and disarray; to understand the basic precepts of Political Economy 101 (i.e., to “follow the money” and “co-opt the locals”); and to throw aside government oversight and auditing rules and maximize fast initial spending for immediate impact, leaving oversight and auditing until later. On this last point, small constraints had big impact; for example, life-insurance policies would only be honored if occupation staff traveled in convoys organized by security personnel, a good way to get killed. So people stayed inside the compound and didn’t get out.

In 1964, General Douglas MacArthur published his book, Reminiscences, describing his agenda for occupying Japan in 1945. He wrote that the country “had become the world’s great laboratory for an experiment in the liberation of a people from totalitarian military rule and for the liberalization of government from within.” He went on to say that his policies there were to

MacArthur never hesitated to tout his leadership skills, but his ambitious checklist had a chance of success only because Japan was so “completely destroyed by the war,” as the general put it. The utter destructiveness of the Allied victory over Germany also enabled an assertive and intrusive occupation there. In both countries, the incoming occupation structure demanded and won immediate authority.

The legacy of these successful occupations is a fixed mental template about occupation practice, which in 2003 exerted a strong grip on neoconservative and Wilsonian enthusiasts keen to transform Iraq. As with Nazis or Shinto militarists, Iraq’s Baathist structure and functionaries would be eliminated. Yet the postinvasion occupation found little in Iraq analogous to Germany’s or Japan’s absolute defeat. Iraq and Iraqis did not lie supine at the conqueror’s feet. The underappreciated psychological operations (PSYOPs) by the U.S. Central Command had sent a basic message to the Iraqis—“If you don’t fight us, we will look after you.” This reached Iraqi officers in many ways—via mobile phones, radio and even in air-dropped paper leaflets the size of dollar bills.

“All this,” as Republican Guard Corps commander Raad al-Hamdani told me, “was nothing less than a battlefield promise for us, a matter of honor.” This was the general who, during the invasion, launched the only serious Iraqi counterattack, on the night of April 2. I had cause to remember his words: in mid-May 2003, I walked among Iraqi officers milling near the ORHA palace and found them quite unable to believe we had decided to disband the preexisting military. Much criticism has been aimed at that decision, but the operative part for the Iraqis—their sense of a betrayal of a “battlefield promise”—holds true even today. Several years later, I saw how deeply felt that “betrayal” had become when working through back channels to peel disbanded officers away from Al Qaeda—a movement these same officers had ruthlessly suppressed in preinvasion Iraq. 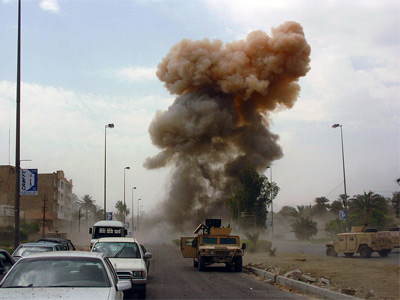 Pullquote: Gene pulled a little Beretta revolver out of his holster and placed it on the table. "Any more democracy talk today?" he asked.Essay Types: Essay