OVER THE last months before his much-lamented death in August 2010, Tony Judt talked at length with Timothy Snyder, his friend and fellow historian. Their conversations, published after Judt died as Thinking the Twentieth Century, were about “the politics of ideas,” the subject of the book on which Judt had embarked after Postwar, his splendid history of Europe since V-E Day, but which he knew he would not live to write. Some of these political ideas had affected him personally, in particular Zionism. As a schoolboy in London and a Cambridge undergraduate, Judt had been not only a committed supporter but also an energetic activist in Dror, a small socialist-Zionist group. He spent summers working on a kibbutz and in 1967 flew to Israel in the hour of peril as the Six-Day War began.

The story of Judt’s disenchantment with Israel and Zionism is well known, culminating in a 2003 essay in the New York Review of Books in which he concluded that Zionism, as a version of late nineteenth-century nationalism, had itself become anachronistic in a twenty-first century of open borders and multiple identities. In Thinking the Twentieth Century, Judt talks again at some length about these questions, and there is one particularly arresting passage. Despite his own early indoctrination in the socialist variant of Zionism, “I came over time to appreciate the rigor and clear-headed realism of Jabotinsky’s criticisms.”

Today there are perhaps not many readers of the New York Times or the Washington Post, let alone most other Americans, even if they warmly support Israel, who could identify Vladimir Jabotinsky by name. “Jabo” died in 1940 at a training camp near New York City and might seem a remote historical figure. And yet, as a South African historian once wrote, although his pages told of distant events, “they are also about today.” While such essays as Akiva Eldar’s fascinating “Israel’s New Politics and the Fate of Palestine” in this magazine give much insight into the here and now, that in itself cannot be understood without the there and then. What Jabotinsky once said and did is acutely relevant now, ninety years after he founded his “Revisionist” New Zionist Organization.

He may have died long ago, but his soul went marching on. In 1946–1948, the Irgun, the Revisionist armed force—“terrorists” to the British and the New York Times at the time—practiced violence against British and Arabs. It was led by Menachem Begin, who in 1977 would become the first Israeli prime minister from the Right, ending almost three decades of Labor hegemony. Two more recent leading Israeli politicians, Ehud Olmert and Tzipi Livni, a former prime minister and a one-time foreign minister, respectively, are children of Irgun activists. Jabo’s portrait hangs at Likud party meetings, and Benjamin Netanyahu, the present Likud leader and prime minister, has a direct personal connection with him. As for the Jewish Americans who continue to support the Jewish state, they may never have read a word of him, but they might be troubled if they did. Jabo is very much about today.

HE WAS born in 1880 into a prosperous, educated Jewish family in Odessa, but when he was a young man the hint of promise given by that city’s cosmopolitanism was bitterly falsified by more pogroms. This experience radicalized Jabotinsky and made him a Jewish nationalist, or Zionist. He traveled throughout Europe to preach the cause, speaking and writing fluently in almost more languages than can be counted. One was Hebrew, which—in its modern form and its attendant literature—he helped invent. Among the many things about him likely forgotten by Likudniks today is that he translated the Sherlock Holmes stories into Hebrew. All in all, this polyglot polymath may be the one man of authentic genius to have been produced by the Zionist movement.

During the Great War, he helped organize—and then served in—the Jewish Legion that fought with the British Army against the Ottoman Empire, and he remained in Palestine under the British rule that followed the war and the Ottoman collapse. In November 1917, the London government had issued the Balfour Declaration, favoring a national home for the Jewish people in Palestine, with the hypocritical or even absurd reservation “that nothing shall be done which may prejudice the civil and religious rights of existing non-Jewish communities in Palestine.” But once they ruled the land, the British soon began to repent of this undertaking they had lightheartedly given, and they despaired of governing a country with two communities facing each other in bitter mutual antagonism.

Soon after the creation of the British mandate over Palestine, Arab violence erupted, which Jabotinsky encouraged the Jewish settlers to resist, fighting force with force. In 1923, he broke with the mainstream movement to found the New Zionist Organization and the doctrine known as Revisionism. If few Americans have heard of Jabotinsky, not all Israelis, one finds, can explain what was supposed to be revised by the Revisionists. That wonderfully protean or adaptable word has variously been applied to a form of late nineteenth-century German Marxism and a group of late twentieth-century Irish historians. But in the 1920s, it came to mean nationalists who wished to rescind or revise the partition of their country: Hungarian revisionists wanted to undo the 1920 Treaty of Trianon, which they believed (not without reason) had most brutally and unjustly dismembered the historic Kingdom of Hungary.

In the year after Trianon, the British colonial secretary was busy rearranging the vast area between Turkey in the north and Arabia in the south, which the Western allies had carved out of the corpse of the Ottoman Empire in arbitrary and cynical fashion. This man was Winston Churchill, whose brief tenure at the Colonial Office from February 1921 to October 1922 was crucially important, and fraught with implications for the future. The British had acquired two huge territories, named almost at random “Mesopotamia” to its east and “Palestine” to its west. In March 1921, Churchill summoned a conference in Cairo, where he took two contrary decisions.

Mesopotamia would become an independent kingdom called Iraq, under the Hashemite prince Faisal, even though this new country, “unduly stocked with peppery, pugnacious, proud politicians and theologians,” as Churchill told Parliament (plus ça change, it’s tempting to add), was a completely artificial amalgam of Shia, Sunni and Kurd: its creation has been described vividly by Christopher Catherwood in his aptly titled book Winston’s Folly. But on the other hand, Churchill divided what had been called Palestine, stretching from the Mediterranean to the borders of Iraq. The larger, easterly portion became another Arab kingdom under Abdullah, Faisal’s brother, now dubbed Transjordan, and with us still as Jordan. All the Zionists were dismayed by this partition, as they had been hoping for colonies east as well as west of the Jordan, but Chaim Weizmann, the leader of the World Zionist Organization, expressed his regrets in private and stuck to his policy of cooperation with the British.

BY CONTRAST, Jabotinsky campaigned openly to revise or undo that 1921 partition, on the uncompromising slogan, “A Jewish state with a Jewish majority on both sides of the Jordan.” But it was not merely his platform and organization that distinguished Jabotinsky: there was also his unsparing analysis, expounded in his 1923 essay “The Iron Wall.”

“There can be no voluntary agreement between ourselves and the Palestine Arabs,” Jabotinsky wrote. “It is utterly impossible to obtain the voluntary consent of the Palestine Arabs for converting ‘Palestine’ from an Arab country into a country with a Jewish majority.” Everyone should be aware how colonization had taken place elsewhere, he said. There was not “one solitary instance of any colonisation being carried on with the consent of the native population. There is no such precedent. The native populations, civilised or uncivilised, have always stubbornly resisted the colonists, irrespective of whether they were civilised or savage.”

These sentiments underlaid Jabotinsky’s whole career. The Betar, his uniformed youth movement, marched for—and before long fought for—a Jewish state with a Jewish majority, while Jabo agitated vigorously for his cause, from Palestine to Europe, North America to South Africa. In 1929, there was further grim violence in Palestine. The Revisionists had organized demonstrations at the Western Wall and, much as Ariel Sharon’s visit to the Temple Mount in September 2000 precipitated the second intifada, the demonstrations provoked anti-Jewish riots. In the view of the British high commissioner for Palestine, the Revisionists had “deliberately seized upon” the contested status of the Western Wall “and worked it for all it was worth, and converted a religious question into a political one.”

In a letter to the London Times in September 1929, Jabotinsky rebutted the charge of “extremism.” He placed the blame on the British authorities for not controlling Arab violence and on London for abandoning what he insisted were the principles of the mandate: “All the Revisionist demands are nothing else but this principle: the Mandate means a large-scale immigration of Jews maintained for a period sufficient to build up a Jewish country.” The Revisionists demanded “what we call a ‘colonisation regime.’” 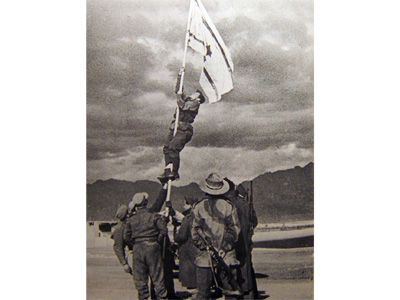 Pullquote: Jabotinsky never shirked the language of colonialism, never denied that the Zionists were settlers and never regretted that this settlement was taking place under the auspices of the British Empire.Essay Types: Essay