Amy Coney Barrett to Senate Democrats: “I am not hostile to the ACA” 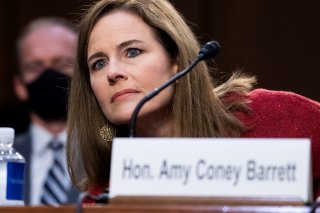 Senate Democrats pressed Judge Amy Coney Barrett on Tuesday at her Supreme Court confirmation hearing over whether she would overturn the Affordable Care Act (ACA), a health care law that Democrats fear would be abolished if she were to be confirmed to the nation’s highest court.

Democrats resurfaced Barrett’s critiques of Chief Justice John Roberts’ 2012 majority opinion of upholding the ACA in a 2017 law article when she was a law professor, suggesting she would fight the Obama-era law.

"Chief Justice Roberts pushed the Affordable Care Act beyond its plausible meaning to save the statute," she wrote. "He construed the penalty imposed on those without health insurance as a tax, which permitted him to sustain the statute as a valid exercise of the taxing power; had he treated the payment as the statute did—as a penalty—he would have had to invalidate the statute as lying beyond Congress’s commerce power."

In response to the implication, Barrett told Democrats that she is “not hostile to the ACA.”

Democrats raised the ACA as a law of concern since it’s scheduled to be argued for a third time before the Supreme Court on Nov. 10 in a case where a group of Republican-leaning states are contending to nix the ACA.

Senate Democrats also plunged into Barrett’s stance on the matter, questioning if she had prior conversations or made assurances to other politicians in terms of how she would rule the law.

“Absolutely not,” Barrett responded. "I was never asked, and if I had been that would have been a short conversation."

The committee’s lengthy confirmation hearings will continue for a third day on Wednesday, with a chance for senators to take part in another round of questioning.

"I have said repeatedly under oath that I've had no conversations with anyone in the White House about that case," she said. "To the extent that there's a suggestion that I have an agenda, that I want to strike down people's protections for preexisting conditions, that's just not true. I've never taken that position and as I've said repeatedly, any policy preferences I have don't matter anyway, they are irrelevant."