AOC: What Makes Her So Popular with Younger Voters? 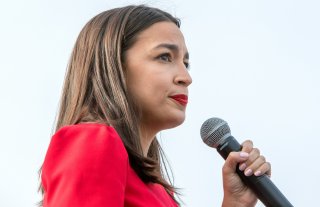 Rep. Alexandria Ocasio-Cortez (D-N.Y.) crashed the Twitch online gaming community Tuesday night in an unconventional approach to reach young voters and encourage them to get out and vote in the upcoming presidential election.

“Holy cow . . . Can y’all hear me?,” Ocasio-Cortez said as she tried to get settled on the platform. “This is pretty wild. I’m pretty excited.”

Ocasio-Cortez played a game of “Among Us” alongside Rep. Ilhan Omar (D-Minn.)—another member of the “squad”—as well as popular streamers like Hasanabi and Pokimane in a night that welcomed more than 430,000 viewers, marking her livestream one of the most-watched in Twitch’s history.

Twitch is an online platform that hosts livestreams of games, music, sports and talk shows, and is particularly popular among teenagers and younger adults. According to the platform, Twitch has 17.5 million daily visitors and roughly 1.5 million viewers at any specific time.

During the night, Ocasio-Cortez talked about politics including issues relating to health care and transgender rights, and also the upcoming presidential election, encouraging viewers to devise a plan to vote.

“I’m so excited by this upcoming election,” Ocasio-Cortez said. “We can overwhelm the polls, and we can get things back on track.”

Ocasio-Cortez’s stream rallied attention from other colleagues on Capitol Hill, and at one point, she mentioned that one of them had texted her about the stream.

“I had no idea how Among Us worked before this Twitch stream, but this is great, and I’ve got my son speed-teaching me,” Amash then tweeted.

The New York congresswoman first invited supporters to tune into her livestream on Monday afternoon by tweeting, “Anyone want to play Among Us with me on Twitch to get out the vote?” Ocasio-Cortez added that although she’s never played it, the game “looks like a lot of fun.”

Instead of hosting a long virtual voting event, appearing at a campaign rally or sending mass emails pushing for young Americans to vote, she asked her millions of social media followers to join her in a playful night filled with animated characters and beaming Twitch streamers.

But this isn’t Ocasio-Cortez’s first debut on the e-sport battlefield. Earlier in the year, she attracted young voters on “Animal Crossing: New Horizons” by requesting to visit the islands of the participants and write messages or leave selfies as she went through each island.

Ocasio-Cortez is the youngest member of Congress and has actively used social media to mobilize young voters to strengthen the growing base of the Democratic party. She’s utilized Twitter, Instagram and effectively made TikTok videos—but posted them on other platforms—to communicate pressing policy issues to young voters.

“Rep. Ocasio-Cortez’s social media savviness has definitely helped her reach a national audience and especially young voters,” Kira Sanbonmatsu, professor of political science at Rutgers University and senior scholar at the Center for American Women and Politics at the Eagleton Institute of Politics, said. “It reflects a shared, generational experience with social media.”

Sanbonmatsu added that while Ocasio-Cortez’s appeal to young voters has a lot to do with her tech-savviness and “shared policy views,” her congressional candidacy serves as “an inspiration to young people in politics.”

The congresswoman brutally defeated former Rep. Joe Crowley (D-N.Y.) in the 2018 primary race. Crowley was labeled as the fourth-ranking Democrat in the House and served for nearly two decades, marking his loss the most significant for a Democratic incumbent in nearly ten years.

At the time, she was seen as an outspoken, progressive politician who fueled a campaign with an aggressive social media presence, as she advocated for proposals such as Medicare for All and abolishing the Immigration and Customs Enforcement. During her primary run, Ocasio-Cortez radically refused corporate PAC donations and was endorsed by the Democratic Socialists of America, and often argued that Crowley, a middle-aged, white male, couldn’t appeal to a diverse community.

“Her appeal is also her life story and her youth,” Sanbonmatsu said.

Lawmakers from both sides of the aisle have taken to social media to connect with younger voters, especially during the 2020 election season, as young voter turnout in the 2016 election consistently remained low—a pattern that’s occurred throughout history. But Ocasio-Cortez is one of the only lawmakers to use video gaming platforms like Twitch to attract younger Americans through a unique, but modern approach to incentivize young voters to go out and effectively vote.