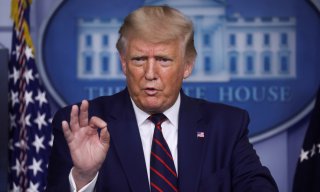 Cycles of the political system are inevitable.

Throughout history, there has been a global evolution of different political parties—the Greenback Party, the Populist Party, the Bull Moose Party—and have made deep-rooted impacts in what Republicans and Democrats currently represent.

During a time of complete political and social tumult, the country has endured a president who goes against the norm and preaches aggressive rhetoric that’s earned him to gain a strong political backing.

On the other end of the political spectrum, the Democratic party has also experienced an era of polarization, where Far Left, radical ideology collides with the representation on the Democratic presidential ticket.

America’s in a time of political uncertainty, where Trump embraces populism and progressive ideals appear to be empowering the Democratic party. The question is, will these modern, new roots outlast the current political cycle?

The Republican Party and Populism

Donald Trump’s presidency has been a whirlwind of unexpected remarks, exaggerated promises and populist rhetoric that’s enabled him to gain deep loyalty from about one-third of all Americans. His persuasiveness is thrilling—especially among white voters—as he claims to speak on behalf of ordinary people who counter the existing political system.

Trump’s “Make American Great Again” slogan promised to rewrite the current political playbook, as his following believed that the present system was completely incapable of revision or reform. The president has vowed to save America and refine it to what it once was.

Trump’s pledged to curb immigration, embrace American-made goods, take the isolationist position against foreign countries and allies, abolish lobbyists and special interests, ignite unthinkable economic power, prioritize law and order and cut taxes on businesses and the super-wealthy. He’s sworn that he can “save the day” and “fix it and will engage in widespread reforms (‘drain the swamp’),” according to Andy Hira, professor of political science at Simon Fraser University.

That’s what populist leaders supposedly do; they swoop in and undo damage to meet the needs and the anger of large groups of people without any specific platform. They use rhetoric that encourages rage, posit outrageous conspiracy theories, skepticize experts and champion nationalism.

“Populists are only against the system, they aren’t for anything in particular, as reflected in Trump’s ever-changing personnel, messaging and strategy,” Hira wrote.

It’s inevitable, however, for a populist movement to continue to emerge throughout history, as different political and social eras require abrupt needs from political parties. From the Know Nothings in the mid-1800s who rejected immigrants and Catholics to the Tea Party in the twenty-first century that breathed off conspiracy theories, ripples of populism are bound to exist.

Despite Trump’s elevated, balloon-like platform that could pop at any instant if he’s not elected in November, the Republican wins have been massive. Senate Majority Leader Mitch McConnell (R-Ky.) dubbed 2017 as “the best year for conservatives across the board” in nearly three decades, as Trump has noted he’s “accomplished more in the past five years than . . . in the previous 50.”

Trump’s exhilarating ability to persuade and appeal to a large disaffected group of people who supposedly oppose the current system has allowed him to generate such loyal supporters. But, as history suggests, populism is a movement, not a change. Waves of populism are inevitable to sprout as political parties evolve and Americans’ needs transform, but it’s also bound to fail because populists simply “don’t know how to govern,” Hira wrote.

Although it exists now, the country is in a phase of a political cycle that’s so polarized and divided, so a more traditional, moderate politician will emerge as the anger and frustrations of Americans subside.

Democrats and the Progressive Movement

When Sen. Bernie Sanders (I-Vt.) ran for president in both 2016 and 2020, he not only represented the Democratic party but also embraced progressivism that’s now flooded modern American politics.

Both Sanders and Sen. Elizabeth Warren (D-Mass.)—a former Democratic presidential candidate in 2020—have championed progressive ideology that supports tuition-free college, the cancellation of all student debt, abolishing the Electoral College, Medicare for All and tax increases for the rich.

Although Sanders withdrew from the presidential race in early April, there has been a number of other progressive wins that the Democratic party has seen in the last two years. Members of the progressive “Squad” in the House including Reps. Alexandria Ocasio-Cortez (D-N.Y.), Ilhan Omar (Minn.) and Rashida Tlaib (Mich.) cruised to victory in their respective primary races. Other progressives like Jamaal Bowman and Mondaire Jones in New York, Cori Bush in Missouri, Marie Newman in Illinois and Kara Eastman in Nebraska have grabbed the party’s nomination in their districts, signaling an even larger, more powerful, far-left movement “as a year of ‘what could’ve been’ is turning into a promise of ‘what can be,’ as the successes provide a new road map of political possibilities,” according to The New York Times.

Progressive victories signal not just a movement, but instead, an era of reform within the Democratic party.

There are, of course, some challenges that progressives have faced in history, considering the biggest defeat of rejecting its faction leader, Sanders—twice.

Some progressive candidates have recently been crushed by more centrist Democrats, including one of the most recent upsets in the Massachusetts race where Alex Morse, mayor of Holyoke, Massachusetts—who received Ocasio-Cortez’s endorsement—couldn’t defeat the powerful Rep. Richard Neal (D-Mass.). Jessica Cisneros in Texas lost to a Democratic incumbent, despite her high rank in Justice Democrats, a progressive group that chimed Sanders’ presidential campaign and continues to promote progressive ideals. Progressive losses suggest that even though the sentiment is robust, the rest of the country’s blue states aren’t feeding for dramatic, far-left representation.

Some Democrats think the grassroots momentum has generated because of Trump’s populist rhetoric, forcing an extremist faction of the Democratic party to sprout that lies on the other end of the political spectrum.

Progressivism clearly exists and is supported by younger Democrats, but its ideals have been rejected twice in the last two presidential elections, as more moderate members were selected to represent the ideology and beliefs of the whole party.

Populism and progressivism aren’t likely to outlast a few years. In history, they haven’t, so it’ll be interesting what types of ideological candidates run in 2024 and which modern ideas from Trump and the Sanders-Ocasio-Cortez movement will survive in the next presidential election.